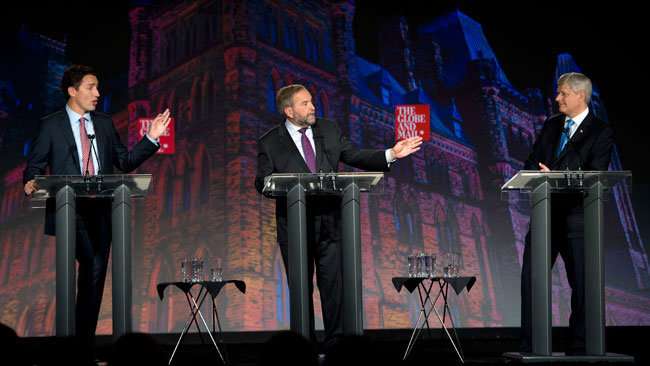 Above: from left to right-Justin Trudeau, Tom Mulcair, and Stephen Harper.

The United States is not the only country in North America currently embroiled in an election cycle. The longest election campaign in Canada’s history comes to a close on October 19th as Canadians head to the polls. At stake is a country ruled by Conservative governments since 2006, facing economic recession and rising income inequality. This article will give a brief overview of the Canadian political system, a description of the status quo, and each of the major contenders in the race.

Canada’s parliamentary system is heavily influenced by that of Britain. Canadians elect members of the lower house, called the House of Commons. These 338 seats (based on geographic location) are currently being contested. The upper house, the Senate, is appointed by the Prime Minister. The Prime Minister, unlike the American President, must sit as a Member of Parliament in the House of Commons. They play a triple role as the local Member of Parliament (MP) for a geographic area, the leader of a political party, and the leader of the country. If you would like to learn more about the Canadian parliamentary system, the late Senator Eugene A. Forsey wrote a guide that can be found here.

The current Prime Minister is Stephen Harper, first elected PM in 2006 with a minority Conservative government. He was reelected in 2008 and in 2011, this time with a majority in the House. The Harper Government has focused largely on economic growth and development. Having been PM in the midst of the 2008 recession, he has done his utmost to maintain steady growth in the Canadian economy through a focus on the resource sector and a stimulus package that included infrastructure upgrades. While supporters point to the fact that Canada has not seen the same loss of jobs and growth as the United States and others, critics argue that the Conservatives in fact have the worst growth record of any Prime Minister since WWII.

The Harper Government has had to face a number of issues besides the economy during their time in office. Under his leadership, Canadian soldiers have been deployed to Afghanistan, Libya, and are currently conducting operations in Iraq. Indigenous issues have also been increasing in importance. He publicly apologized on behalf of the Canadian government for Residential Schools in 2008, a government program that took Aboriginal children from their homes and forced them to live in boarding schools. However, critics argue that Mr. Harper has done little since to mend the broken relationship between Indigenous Peoples and the government. A report released by the Truth and Reconciliation Commission of Canada earlier this year called out this government for failing to take meaningful action on living conditions in Indigenous communities, or the disproportionately high number of missing and murdered Indigenous women.

It is with this legacy that the Conservatives entered the election. Unsurprisingly, their campaign has focused largely on economic issues, characterizing Mr. Harper as a proven leader who has led Canada through a period of unstable economies relatively unscathed. The two main parties contesting him for government are the Liberal party and the New Democratic Party.

The Liberal Party of Canada are a center-left brokerage party that governed Canada for most of the 20th century. Over the course of successive governments, they have introduced social measures such as universal health care, and old age pensions, and introduced the Canadian Charter of Rights and Freedoms. However, they were also responsible for deep cuts to the public service in the 1990s and first deployed Canadian soldiers to Afghanistan in 2001. The emergence of allegations of financial mismanagement in Quebec brought down Paul Martin’s Liberals in 2006. In the last election, the Grits suffered their worst defeat in history, winning only 34 seats and demoting them to the third party in the House of Commons.

The Liberals are now led by Justin Trudeau, the son of the late Prime Minister Pierre Trudeau, best known for ratifying the 1982 Constitution Act. Their party platform is aimed at the middle-class voter and offer up a myriad of tax incentives, while increasing tax rates on the richest Canadians. Economically, Trudeau has pledged to run modest deficits for the first few years of his government in order to stimulate the economy through social spending. He has also pledged to implement the recommendations of Truth and Reconciliation Report. Lastly, the Liberals have pledged to legalize marijuana upon forming government.

The New Democratic Party of Canada (NDP) is traditionally the choice of leftist, socially-conscious Canadians and are currently led by Tom Mulcair. Mulcair has had a long career in public service, having been a minister in Quebec Liberal governments before turning to federal politics. The NDP had their most successful election result in history in 2011, becoming the Official Opposition for the first time ever. The party leaped from 36 seats to 102. This “Orange wave” was propelled by a stunning show of support from Quebec-traditionally a Liberal stronghold.

The NDP have recently been on a far more centrist platform than in previous campaigns. Mulcair’s platform, like the Liberal’s, caters mostly to the middle class. He is pledging to introduce $15 a day daycare nationally, cut interest fees for credit cards, and, like the Liberals, decriminalize marijuana. Unlike the Grits, Mulcair is promising to deliver his promises without running a deficit.

The challenge in this election for both leftist parties has been to differentiate themselves. Canadians are divided amongst Conservatives and ABC (Anything But Conservative) supporters. However, leftist voters have the choice of the Liberal, the NDP, and a number of other groups, including the Greens. Canada’s perennial fourth party, the Greens elected their first MP in 2011. This split has led to campaigns, such as Lead Now that encourage strategic voting, or voting for the anti-Harper candidate with the best chance of winning according to poll results. Current polling predictions place the Liberals in first, the Conservatives in second, and the NDP at third. However, with a day to go, it’s still anyone’s game.

Adrienne Tessier is a third year Honours Political Science student at the University of Winnipeg (Manitoba). She is a past participant of SHU’s 2015 Summer U.N. Intensive. You can tweet her @historybuff1295

2 thoughts on “A Quick Guide to the Canadian Election”