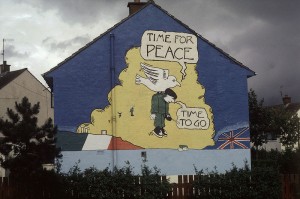 In November, there was resurgence in the Palestinian-Israeli Conflict. Considering the many historical similarities that the Israeli-Palestinian conflict has to conflict in Northern Ireland, many suggest using Northern Ireland as an example to establishing a political solution. However, a recent decision by the Belfast city council to restrict the amount of days the Union Flag flies at City Hall has stirred the always tenuous relations in Northern Ireland. The political process provided the means by which to obtain a peace agreement in Northern Ireland in the 1990s but it was the economic opportunities, especially for youth, which set the stage for political agreement.

The increase in employment had two effects that allowed the political process to work its course. Catholics had been disenfranchised and exploited for decades if not centuries, so with more employment opportunities available it provided Catholic youth the opportunity to work and pursue material well-being. This chance to work in the Northern Ireland economy is something past generations never had before.. As economic opportunity grew, many sought to further expand upon these opportunities and thus, were supportive of a peaceful solution.

Secondly, the additional employment prospects removed youth from the street. Youth, who are generally very impressionable, were particularly vulnerable to recruitment into paramilitary groups and illegal activities. By providing them with employment responsibilities, youth were in effect removed from the influence of the paramilitary groups.

In recent years violence has begun to escalate in Belfast. Accordingly, since a low in youth unemployment of less than 10%  2007, unemployment has skyrocketed to above 21% in 2012. Rioting was almost expected every July as loyalists celebrated the anniversary of the Battle of the Boyne; however, this rioting was generally perpetrated by youth and was isolated to certain areas of the city. The recent decision by Belfast’s city council to fly the Union flag on certain days as opposed to year round has incited these tensions. After the vote was passed, a mob of loyalist protestors stormed the gates of city hall injuring police and security personnel; in addition, there have been continuous protests and death threats to a minister of parliament.

According to the Middle East Youth Initiative, the Middle East is experiencing an unprecedented growth in its youth population with  30% of the total population falling between the  ages 15 to 29. Youth unemployment for the region is around 25% but Palestinian unemployment was estimated to be near 40%. As was demonstrated in the recent Arab Spring, youth are demanding more opportunities and are playing a larger role in the decisions of states. If there is to be any future peace between Palestine and Israel, policy makers need to address the growing numbers of unemployed youth. As long as there remain few opportunities for the youth, there will be an unending source of violence and discontent in Palestine.

Joe is a blog writer for the Whitehead Journal and a first-year Masters candidate at the Whitehead School of Diplomacy and International Relations. He specializes in Foreign Policy Analysis and Global Negotiation and Conflict Management.