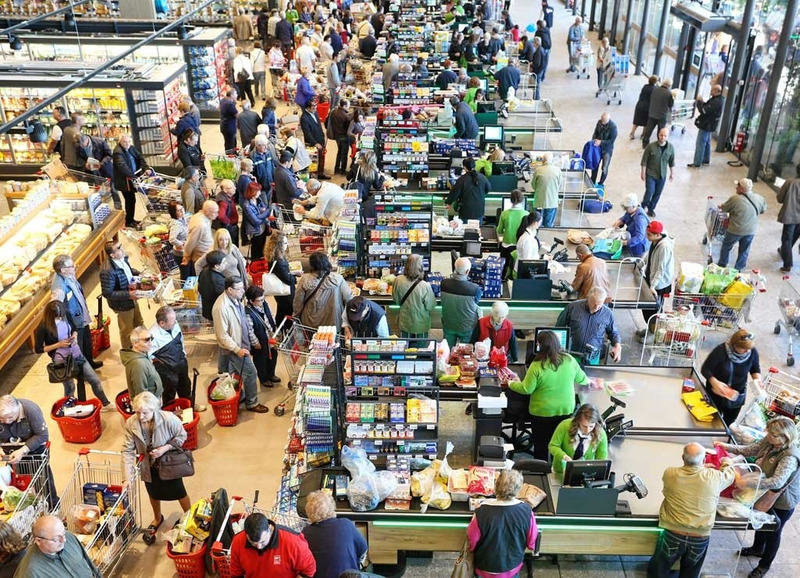 On Work: Remarking the Unremarkable By Emma Newgarden

The time is 2:00 pm on a mid-July Saturday: the busiest point of the week for cashiers at Stop&Shop, the neighborhood supermarket where I’m working this summer. The whole store rings with the sounds of the checkout lines. Bebeep, thrrr. Bebeep, thrrrrrr. From my station at register 13, I contribute to this mechanical rhythm, passing each customer’s items over the scanner as they slide down the conveyor belt. One at a time, hand over hand, over and over until my eyes start to glaze. Bebeep, thrrr. Bebeep, thrrrrr. It feels like I’ve been ringing up orders for hours, bagged a hundred groceries at least. Then I glance at my screen and stifle a groan; the clock reads 2:35.

To the typical “broke-college-kid”, this dreary scenario is all too familiar. Most young adults have experienced something like my sinking sensation while trying to earn a few bucks over the summer, at one part-time job or another. In such moments (which seem to arise far too regularly at Stop&Shop) when work seems like nothing but tedious drudgery, it’s hard to keep from grumbling, this job is completely pointless. Remind me why I signed up again?

Of course, we know that there is a point for us on some level- that we “signed up” in hopes of making enough extra money to hold us over through all the take-out fueled, late-night study sessions ahead, and to add some form of experience to our resumes. Students often feel enormous pressure to have something to show for their three months out of school. Holding a job at the register, for example, while not the most prestigious achievement, at least proves I did more than watch Netflix all summer. Therefore, I can justify my work as a cashier as worthwhile on the grounds that it has some practical function in boosting my “marketability.”

Still, this type of validation can wear thin pretty quickly while doing boring temporary jobs- jobs that don’t appear to contribute any relevant skill set for the career to which he or she ultimately aspires. The consolation “something is better than nothing” rings especially hollow with summer temps, who after being bombarded all year with eager encouragement toward “pursuing your passion” and similar ambitious messages, must now find themselves settling for decidedly humdrum positions. One has to wonder: beyond the generic monetary and practical upsides that school guidance counselors always list, is it possible to find real fulfillment in work that seems mundane?

This age-old question, renewed with each new generation of workers in every society, addresses at its core the idea that some forms of work are naturally more valuable than others. The misconception dates back to the ancient world, when physical labor was the realm of lowly slaves, and thereby sunk in esteem even though it was essential in freeing those of higher classes to take up other trades. The stigma has persisted and caused crisis throughout history: for example, Karl Marx’s vision of the working class as locked in perpetual struggle against the “production-owning” class trying to suppress them led to the Bolshevik revolution, and eventually to the Cold War, along with many other periods of worldwide fear and violence.

Even in today’s society, hypersensitive to any potentially offensive differentiations, the tendency to rank manual laborers below white-collar workers in worth and prestige can still be perceived. Thankfully, however, the spirituality of human labor has always occupied a central place in Catholic Church teaching, so there are many sources to which we can turn for clarity. In particular, Pope John Paul II’s 1981 encyclical Laborem Exercens clearly elucidates the question of why work is good and worthwhile at all levels.

This papal letter debunks the myth concerning the inferiority of manual work right off the bat by pointing out the simple fact that Jesus Christ lived most of his earthly life as a carpenter. If building tables and chairs was not beneath the Lord Himself, how could it possibly be degrading to us men who are made in His image? Beyond this, countless New Testament instances demonstrate the respect Jesus has for human labor in all its forms. His teachings and parables contain references not only to people who work with their hands, like farmers, fishermen, and housewives, but also to members of more highbrow professions, scholars and statesmen.

According to Pope John Paul II, this universal Gospel of Work shows that the value of work in any instance does not depend on its objective ends, but on its subject- the human being who performs it. It is the worker who imbues her work with her own inherent dignity, not the other way around. In light of this relationship between work and worker, and considering the extraordinary depth of a dignity that comes from having been made in God’s likeness, the idea of a “worthless” job becomes inconceivable.

Laborem Exercens traces this truth back to Genesis’ creation story. Although in the biblical text hard labor may be read as a punishment inflicted upon humans after their disobedience, the labor of cultivation was always entailed in Adam and Eve’s original directive from God to “subdue the earth,” a wholesome, necessary function of living out that calling to be stewards of creation. Any honest work that people do is a form of participating in God’s own great work of creation, exerting their rightful
dominion as its peak. Any job, even one that is far from the worker’s ideal or ultimate career vocation, can fulfill this purpose.

Naturally, one hardly feels like the peak of all creation while bagging and scanning groceries for hours on end, but John Paul II explains that while work was made for humans and vise-versa, it also must carry an element of sacrifice.

This comes in connection with the curse of original sin, “In the sweat of your face you shall eat bread till you return to the ground, for out of it you were taken.” Yet, there is value in the hardship of toil as well, in that it mimics, in some small capacity, the suffering of Christ as he labored to haul the cross up Calvary. By enduring with grace the daily “crosses” of our work, we display mankind’s acceptance of Jesus’ redemption and collaboration with Him in His work of salvation.

Through Laborem Exercens’ illumination of work’s innate spirituality, Pope John Paul II calls workers of all stations to action, both summer cashiers and their professors back in college alike. Appreciate the labor of all people, which each worker dignifies by his own humanity, regardless of how trivial or prestigious it may seem. And, when the former is the case, we can find solace in the image of Christ crucified.

In a way, each customer transaction, each willfully upbeat “have a nice day,” draws us closer into union with His mission, and into our most humble and yet most important core identity. As John Paul II puts it, “Work is a good thing for his humanity-because through work man not only transforms nature, adapting it to his own needs, but he also achieves fulfillment as a human being and indeed, in a sense, becomes ‘more a human being’.”