Challenges in the Developing World and the Role the U.S. Should Play

II. Presentation on the conditions in Niger – Dr. Kaba (30 minutes – includes time for questions by participants)
–    What is the current status in Niger
–    What factors led to these conditions
–    What are the implications? For Niger? For Africa? For the World? For the U.S.?
–    Present comparison to Afganistan – Discuss similar conditions in the aftermath of the war with the Soviet Union. How does this relate to Niger?

III. How to assist in human development in Niger
Participants will be presented with descriptions of potential international actors to assist Niger’s needs for human development:
i.    UNDP
ii.   Peace Core
iii.   USAID
iv.    US Congress
v.    Individual donors
vi.    Charitable organizations -not for profit, church groups, etc.
vii.    NGO’s operating in Africa
–    In small groups participants will be instructed to discuss the pros and cons of involving choices the above list.
–    Groups will seek to arrive at consensus for a plan of action
–    Groups will share their responses and reasoning 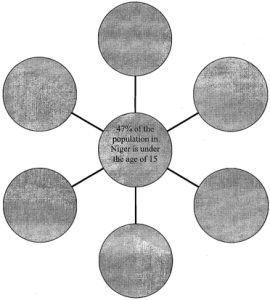 What is the Potential Effect?

Conditions or events rarely, if ever, occur in isolation. Most often an event will have ripple effects that may both benefit and challenge a society. Using the diagram below, look at the characteristic in the inner circle and identify what some of the potential impacts of this might be in the outer circles.

What Can You Do

Citizenship in the global environment requires individuals to become educated about the interconnections among all the peoples of the world and use this knowledge in meaningful ways to the betterment of society.
This means everyone will need to:

In this activity you will have the opportunity to apply what you have learned about the West African country of Niger and to consider actions you could take in response to the conditions facing the citizens of this country.

Now that you have considered several sources of aid to the developing world, you will write a response outlining what course of action you would support in addressing the needs of human development in Niger. You must explain why you would support this approach and identify what role you could play in this process. Be prepared to share your ideas with your classmates.
Note to teachers: Students may share responses in class in whole class discussions, small groups, structured debates, or in a lobbying simulation. Ultimately the class should vote on a course of action. Among the opportunities for students to take action are writing letters to government officials, making charitable donations, volunteering, or pursuing projects such Read to Feed or Pennies for Peace.

The United States Agency for International Development (or USAID) is the United States federal government organization responsible for most non-military foreign aid. An independent federal agency, it receives overall foreign policy guidance from the United States Secretary of State and seeks to extend a helping hand to those people overseas struggling to make a better life, recover from a disaster or striving to live in a free and democratic country.
USAID advances U.S. foreign policy objectives by supporting economic growth, agriculture and trade; health; democracy, conflict prevention, and humanitarian assistance. It provides assistance in Sub-Saharan Africa; Asia and the Near East, Latin America and the Caribbean, Europe, and Eurasia. The organization’s status as an independent government agency causes some to question critics to Critics claim that without military interventions.

The United Nations Development Program is the United Nations’ global development network. Headquartered in New York City, the UNDP is funded entirely by voluntary contributions from member nations. The organization has country offices in 166 countries, where it works with local governments to meet development challenges and develop local capacity. Additionally, the UNDP works internationally to help countries achieve the Millennium Development Goals (MDGs).

UNDP provides expert advice, training, and grant support to developing countries, with increasing emphasis on assistance to the least developed countries. To accomplish the and encourage global development, focuses on poverty reduction, HIV/AIDS, democratic governance, energy and environment, and crisis prevention and recovery. UNDP also encourages the protection of human rights and the empowerment of women in all of its programs. Critics of UNDP are concerned with limited oversight and misallocation of funds in some instances. Addressing these concerns requires more employees to be placed at the sights receiving aid in order to oversee projects. Another concern is the UN’s inability to take actions when there is corruption or a violation of the terms related to aid.

The World Bank is an internationally supported bank that provides financial and technical assistance to developing countries for development programs. The WB’s areas of operation include: poverty reduction, conflict and development, education, energy, environment, gender, governance, health, social protection and social development to name a few. For the poorest developing countries in the world, the Bank’s assistance plans are based on poverty reduction strategies. By combining a cross-section of local groups with an extensive analysis of the country’s financial and economical situation the World Bank develops a strategy pertaining uniquely to the country in question. The government then identifies the country’s priorities and targets for the reduction of poverty, and the World Bank aligns its aid efforts correspondingly.

Some critics of the World Bank believe that the institution supports United States’ business interests, and argue that the bank has actually increased poverty and been detrimental to the environment, public health, and cultural diversity. It has also been suggested that the World Bank is an instrument for the promotion of U.S. or Western interests in certain regions of the world. Criticisms of the structure of the World Bank refer to the fact that the President of the Bank is always a citizen of the United States, nominated by the President of the United States and that the decision-making structure is undemocratic, as the U.S. effectively has a veto on some constitutional decisions with just over 16% of the shares in the bank.

Through federal legislation the United States provides aid to many nations, both developed and developing, throughout the world. During the current administration’s tenure U.S. aid to Africa has increased dramatically from $1.4 billion in 2001, to $4 billion this year. The bulk of aid granted through congressional legislation is for defense purposes and furthering national security interests. Currently the U.S. Government is facing record deficits and critics claim that cuts in foreign aid may help to bring down federal spending. Other critics argue that federal dollars should be channeled to pressing domestic issues.

Since 1960, Peace Corp volunteers have served their country in the cause of peace by living and working in developing countries. Since that time, more than 190,000 Peace Corps Volunteers have served in 139 host countries to work on issues ranging from AIDS education to information technology and environmental preservation. Today’s Peace Corps is working in emerging and essential areas such as information technology and business development, and committing more than 1,000 new Volunteers as a part of the President’s Emergency Plan for AIDS Relief. Peace Corps Volunteers continue to help countless individuals who want to build a better life for themselves, their children, and their community.

Catholic Relief Services: Their mission is to focus on the poor overseas by providing assistance on the basis of need, without regard to race, creed, or nationality. The organization seeks to help people in the developing world break the cycle of poverty through community-based, sustainable development initiatives that involve the community. Programs include agricultural initiatives, community banks, health education and clean water projects. In the area of education the organization has implemented activities such as Food-Assisted Education, also known as school feeding programs that help meet short and long-term education, nutrition, and food security objectives. In the mid-90s, education programs were extended to combine school feeding with education activities that focus on improving the quality of education, girls’ access to education, support for teachers, health/hygiene education and services for students, school infrastructure improvement, and increased parental and community involvement in schools. In most Africa and Asia programs, school feeding activities have a special emphasis on drawing girls to school. In all instances the organization gives special emphasis to working with the social agencies of the local Catholic Church and other faith-based organizations

Heifer International: The mission of Heifer International is to work with communities to end hunger and poverty and care for the earth. Since 1944, Heifer has helped 9.2 million families in more than 125 countries move toward greater self-reliance through gifts of livestock and training in environmentally sound agriculture. The impact of each initial gift is multiplied as recipients agree to “pass on the gift” by giving one or more of their animal’s offspring, or the equivalent, to another in need. Heifer’s education programs give teachers and other educators the resources to help students develop a passion for helping others. With lesson plans, action ideas, activities, multimedia supplements and other tools, teachers can do for their students what Heifer does for project partners around the world: inspire others to become part of ever-widening efforts to create a better world. Currently there are no active Heifer programs active in Niger, although several other West nations do have programs. Learn more at www.heifer.org.

WaterAid: Their mission is to overcome poverty by enabling the world’s poorest people to gain access to safe water, sanitation and hygiene education. These basic human rights underpin health, education and livelihoods and form the first, essential step in overcoming poverty. The organization works with local partners, who understand local issues, and provide them with the skills and support to help communities set up and manage practical and sustainable projects that meet their real needs. They also campaign locally and internationally to change policy and practice and ensure water and sanitation’s vital role in reducing poverty is recognized. Currently there are seventeen WaterAid programs worldwide, eleven in Africa, but none are in Niger.

UNICEF Niger is working to ensure that a child rights approach forms the basis for the development of the new country program of cooperation. The basic education program continues to focus on promoting girls’ education and improving school environment, curricula, equipment, furnishings and education innovations. UNICEF is to gather data working on child protection for policy purposes and enhancing positive behavior changes in the area of child and women’s rights. This includes increasing awareness of birth registration, discouraging early marriage, promoting nutrition and girls’ education.

The Central Asia Society: This organization was co-founded by Greg Mortenson and the late Dr. Jean Hoernui. Since 1993 Greg Mortenson has dedicated his life to promote community-based education and literacy programs, especially for girls, in remote mountain regions of Pakistan and Afghanistan. Mortenson is also founder of Pennies For Peace and co-author of the #1 New York Times best-seller, Three Cups of Tea: One Man’s Mission to Promote Peace …One School At A Time (Penguin 2007) Mortenson’s work is proof that, “one ordinary person, with the right combination of character and determination, really can change the world.” -Tom Brokaw Currently the Central Asia society works only in Pakistan and Afghanistan.

← Human Development on the Arabian Peninsula Controversy and Citizenship →