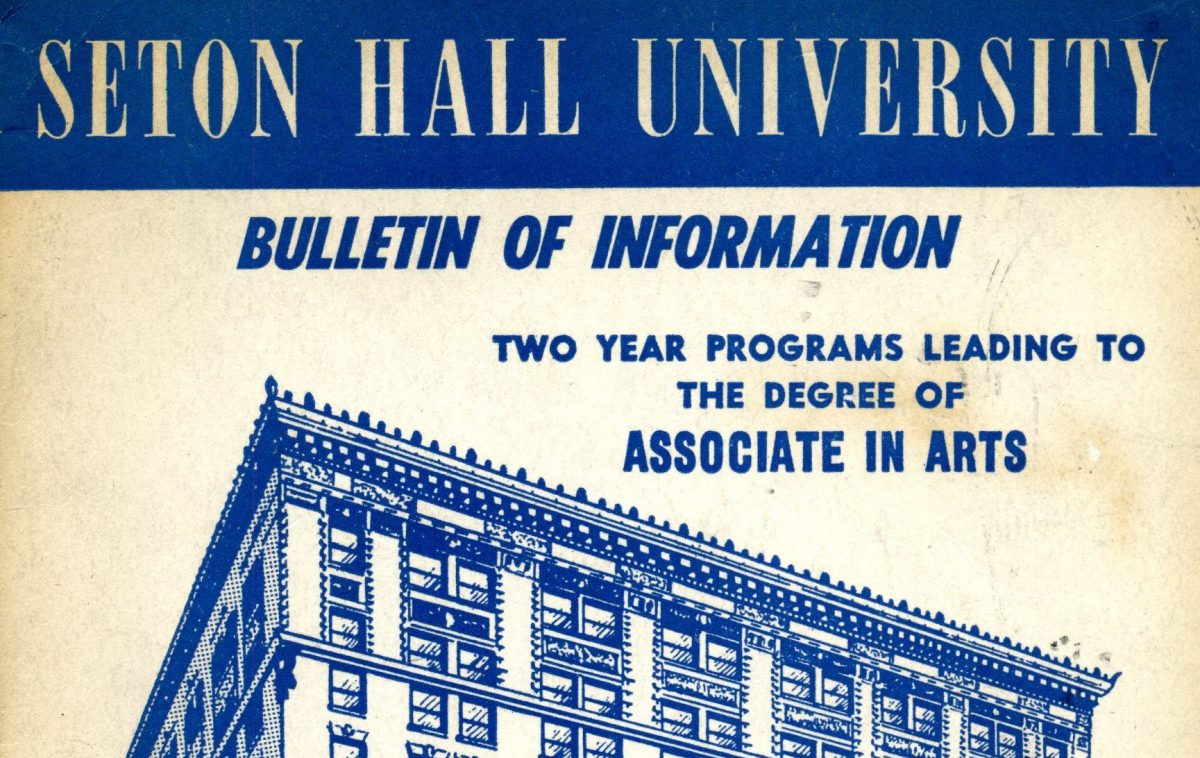 From its first semester forward, Seton Hall has offered students the option of pursuing a bachelor of arts or bachelor of science degree through its undergraduate studies program which on average typically lasted four years to complete. However, there have been exceptions to this traditional approach as educational trends changed over time.  For example, Seton Hall offered not only collegiate level instruction, but a preparatory school option during the earliest decades which encompassed a seven-year curriculum until this was discontinued in 1897 with “Seton Hall Prep” establishing its own identity.  Otherwise, during the twentieth century, Setonia began to develop various professional, or extension schools (not only its South Orange campus, but also in Newark, Jersey City, and Paterson) outside of the customary post-secondary model including such study options as certificate programs, distance education, graduate degrees, and other specialized curricula.  In general terms, many of these programs were designed to help educate and build specific skill sets for those who wanted to learn outside of the undergraduate model.  In many cases, these programs usually last two-three years (or less) depending on the major and curriculum involved.  This led to an experimental school known as the Seton Hall Community College which helped train a number of individuals for work in the white collar world. 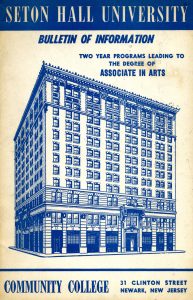 Seton Hall Community College (SHCC) followed a wave of other accredited two-year schools (also known as junior colleges) that were established nationwide. During the post World War II and Korean War-era when the GI Bill helped pay for tuition for college education this led to an explosion in college attendance and offered increased learning opportunities for veterans, but also others who wanted to explore different vocational options.  On a more local level within New Jersey, for a number of years SHCC shared company with independent junior colleges that featured Catholic-affiliation including  the now defunct Alphonsus, Don Bosco, Englewood Cliffs, Maryknoll, and Tombrock Colleges for example.  Today most accredited community colleges are public institutions administered on a county-wide basis, but although no longer in operation, SHCC still retains its place in the annals of junior college history.

SHCC was founded in 1952 as a two-year school that offered classes at its original campus located within the 12-story structure situated at 31 Clinton Street in Newark or in the building situated at 3055 Boulevard in Jersey City.  From its start, SHCC was co-educational and mainly designed for those who worked during the day as classes were typically held during late afternoons, evenings, and on Saturdays.  However, before anyone could enroll they had to meet admission requirements.  As noted in SHCC catalogs of the period the school  offered “young men and women” who attended high school and had adequate grades along with good “ . . . health (and) character . . .” along with passing “ability (and) placement” tests and a post-exam interview helped to assure admission.  Furthermore, the individual had to complete an official application and offer official transcripts for board review.

When contemplating a course of study the prospective student had a limited amount of offerings at the start as SHCC granted diplomas in either Business or Secretarial Studies when it began operations.  During its first years within the framework of  different concentrations including General Business, Accounting, Selling, Personnel, Retailing, Insurance, General Secretarial, Medical Secretarial, Insurance Secretarial, or Legal Secretary work were available.  When it came to the core curriculum, the first semester that a typical freshman faced included a total of 9 required credits which included one credit courses in “Apologetics I,” “Survey of the Catholic Religion I,” or “Religion and Reason” and partnered with such two credit offerings as – “Principles of Rhetoric I,” “History of the United States I,” “Voice and Diction I and II,” and “The Natural Sciences.”  During the mid-1950s, a new major was established an Associate Degree in Applied Police Science. For this path of study, he same type of classes were required at the start along with Moral Philosophy and eventually led to such courses as “Traffic Control,” “Swimming and Life Saving,” “Principles of Investigation,” Psychology of the Criminal,” and others.  Along with required and topical classes, optional classes available through the College of Arts & Sciences, Education, and General Studies were also available in subsequent semesters.  When it came to costs, the fee structure for the SHCC included the following: Matriculation Fee (payable once)  – $10.00, Tuition per credit – $13.50, Graduation Fee – $20.00, Registration Fee (per semester) – $3.00, Student Activities Fee  (per semester) – $1.00, Laboratory Fee (Typewriting) – $5.00 and a comprehensive $125.00 for the Applied Police Science program. 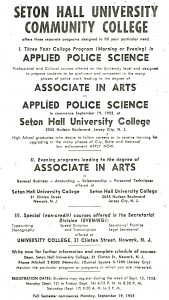 In order to make the experience more well-rounded, the school offered students personnel counseling, various extracurricular activities, a student council, placement bureau, and various facilities for Ex-Service Men among other options.  In addition, the ability to transfer into a four-year program either for those who earned the requisite 68 credits (36 in the basic core and 32 in electives) was in the offing for those who wished to advance further.  Once all required coursework, costs, and other goals were met, this led to an Associate of Arts degree for the graduate.

For those who attended and the message after graduation was outlined for the student in the following practical manner:  “Earning A Living.  The practical world today requires that young people acquire skills and understanding if they are to succeed in the highly competitive situation which prevails.  Seton Hall has selected general fields of training that grow out of the needs of the great metropolitan area.  Particular attention has been paid to those fields in which there are the greatest shortages of adequately trained personnel at present.  The programs planned, however, are sufficiently fundamental so that adaptability to general business as well as specific ability in one field may be expected . . . “ Therefore, the SHCC strove to meet this goal for its students and those who called it alma mater.

Although admissions and attendance peaked during the mid-1950s, the days of the SHCC were numbered as more schools were established and Seton Hall concentrated more on its undergraduate division and looming full co-education options on the South Orange campus which occurred in 1968.  The last days of SHCC came about around 1964 when the last two graduates of the program earned their A.A. degrees, but all who attended, taught, or were impacted by the Seton Hall Community College remain part of the institutional history and are pioneers in the educational development of the school.

For more information on Seton Hall Community College and other aspects of school history please contact Alan Delozier, University Archivist at: <Alan.Delozier@shu.edu>  or (973) 275-2378