Our school newspaper known as The Setonian has been a staple on campus since 1924 and since that time has featured numerous stories that focus on factual reporting.  Accuracy in journalism is the goal for anyone involved with the press from the writer to the editor before any article reaches the public.  Even before the upsurge in “fake news” that has become more commonplace in contemporary society there are times when content is purposely meant as satire in order to provide comedic relief.  This was clearly stated in the annals of Setonia lore as the paper regularly featured a special “April Fools’ Edition” dated April 1st from its inaugural appearance in 1956 through the remainder of the decade through the 1960s in particular. 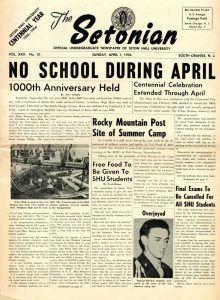 These special editions were clearly meant to lampoon college life and often featured clever headlines and text to bring momentary shock, but with it harmless humor and often an inkling that something is amiss.  In many cases, the more outrageous the headline, columns, and photograph(s) shows the creativity of those involved with the prank.  In all cases though a disclaimer is issued that warns the reader of what they are to expect.  For the latter day audience these special issues have historical value on what constituted comedic values in a particular era. 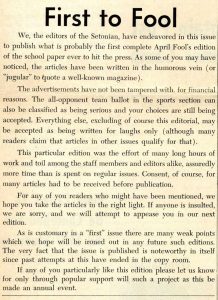 For more information about college humor, satire in print, and other historical notes about Seton Hall please feel free to contact Alan Delozier, University Archivist at: Alan.Delozier@shu.edu or phone at (973) 275-2378.