The UN Association–USA: A Little Known History of Advocacy and Action 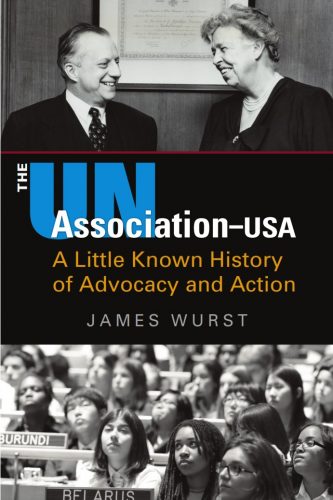 Two days after the attack on Pearl Harbor, President Franklin D. Roosevelt delivered a radio address saying, “There is no such thing as security for any nation — or any individual — in a world ruled by the principles of gangsterism. There is no such thing as impregnable defense against powerful aggressors who sneak up in the dark and strike without warning…. We are going to win the war and we are going to win the peace that follows. And in the dark hours of this day — and through dark days that may be yet to come — we will know that the vast majority of the members of the human race are on our side.” The next day, FDR’s personal secretary received a letter from Clark Eichelberger, the Director of the League of Nations Association, offering the services of his organization and related groups to help the President construct “the organization of the world for peace and justice.”

This was not a spontaneous idea born from shock of the attack. It was the exact opposite. For more than 20 years, Eichelberger, the LNA, and others had carried the banner for “World Organization” as declared by the League of Nations. While the League itself continued to slip into irrelevance, the LNA continued to promote the ideals of the League, calling for revisions of the League of Nations Covenant to make the world body both more effective and more acceptable to the United States. By the time World War II was at its bloodiest in the early 1940s, there was finally a consensus among the allies that a new organization for international security – not simply a victor’s peace – was necessary well before the shooting stopped so when peace finally came, the world would have a new foundation to build upon.

… The single overarching obsession of the internationalists — starting with FDR himself — was to ensure the multiple failures of the League of Nations would not be repeated. In global terms, this meant creating an international organization that had real authority and was not created as a victors’ peace. In US domestic terms, this meant engaging as broad a spectrum of political (especially Congressional) and popular opinion. It had been less than twenty years between the Paris Peace Accords of 1919 and Hitler’s annexation of the Sudetenland in 1938, meaning that for most political and military leaders in the late 1930s, the Great War was living memory. Harry Truman, Dwight Eisenhower, and Eichelberger were soldiers in the Great War; FDR was a junior government official at the time. In her memoirs, This I Remember, Eleanor Roosevelt recalled the United Nations Assembly in London in 1946 that brought up the ghosts of previous failures. “So many of the Europeans were older men who had made the effort with the League of Nations and were a little doubtful about a second international effort to keep the world at peace,” she wrote, “The loss of a generation makes itself felt acutely twenty to twenty-five years later, when many men who would have been leaders are just not there to lead.”

Among the internationalists, there was no debate that the failure of 1919 led directly to the next world war. And it certainly was not a question of hindsight. Paul Kennedy, in The Parliament of Man, reproduced a chilling political cartoon from 1919 entitled “Peace and the Cannon Fodder” from the [New York] Daily Herald. It depicts the Great War victors strolling out of the Paris Conference while cowering behind a column is a small, naked boy labeled “the soldier of 1940.” …

… The Policy Studies Committee of the UNA Board decided in the late 1960s that the most urgent foreign policy issue was the tension between East and West. A Policy Studies program brought together US experts to discuss important security issues in the US-Soviet relationship and, later, a Parallel Studies program brought together American and Soviet experts to discuss a range of issues. The first was undertaken with partners in the USSR; subsequent programs involved Japan and the People’s Republic of China. The initiative with the Soviet Union started during a relatively calm period in US/Soviet relations, in the late 1960s, when the two superpowers were cooperating on several arms-control ventures, including the Nuclear Non-Proliferation Treaty (NPT), the Anti-Ballistic Missile (ABM) Treaty and the first agreement limiting the stock of strategic ballistic missiles — the SALT I Treaty. Under President Nixon, arms control was high on the priority list of both Washington and Moscow as a means of reducing tensions between the two countries.

UNA began its policy studies program in the mid-1960s under Elmore Jackson, the vice president, whom Porter McKeever, then UNA’s president, recruited from the State Department in 1966…

… One of Lenefsky’s last acts before leaving UNA in 1972 was to hire [Toby] Gati, who had just earned her master’s degree in international affairs degree from Columbia University. While still at Columbia, Gati asked a former UN ambassador, Charles Yost, who was teaching at the university, for career advice, and he directed her to UNA. She was hired as a researcher and became the Parallel Studies project director in 1974. [Ed] Luck, her classmate, was hired in 1974, first as a researcher and eventually as a project director. As project directors, “We wrote articles together and worked extremely well together,” Gati said. She and Luck would divide up an article, each of them writing different parts that would come seamlessly together. In addition, “We had to do fund-raising because every one of these projects had to be self-supporting. It was more than that. Our programs became a net contributor to the UNA budget.” …

Besides influencing Soviet thinking on these issues, “we brought ideas back to the State Department and the White House,” Gati said. Like many US embassies around the world, those in the Eastern bloc were isolated; the US embassy in Moscow, for example, “didn’t have many of the contacts we had.” In fact, “the embassy rarely saw people from the Politburo, but we often did.” As a result, “there was not that much information on the Soviet Union at that time and what it was thinking,” she said. So, after returning home from meetings in the Soviet Union, UNA-USA members would find themselves cited in The New York Times about the policy implications of what they had learned in their discussions abroad…

These were insights that UNA could relay to the UN itself. “We had a unique understanding of those issues. We had very close relationships with every Secretary-General. We could go in and talk about any subject, nonproliferation, any subject on our agenda,” Gati said. “We had our reports on UN reform, or on nonproliferation, or on economics – whatever issue, we had entrée into the highest level of the UN to discuss. I remember holding sessions on different topics and inviting ambassadors from all over based on work that UNA-USA had done.”

For more about the book and how to purchase it, please go to:
https://www.rienner.com/title/The_UN_Association_USA_A_Little_Known_History_of_Advocacy_and_Action