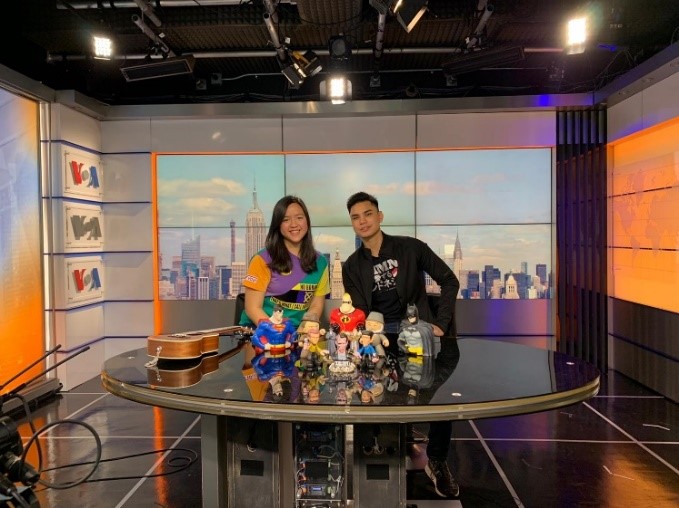 My name is Eugenia Audrey Utoyo and I am a senior undergraduate student studying Diplomacy and International Relations. I recently completed an internship with the Voice of America (VoA) in their office in New York City.

The Voice of America is a governmentally funded multimedia agency that broadcasts news topics from all across the globe. They provide a comprehensive coverage of the news ranging from international affairs and U.S elections to pop culture and entertainment. Although Voice of America is primarily a U.S News agency, they also represent several major countries like Turkey, China, and Russia.

At VoA I worked as a Media Intern. My main responsibilities included cooperating with VoA’s Indonesia branch and coordinating tasks with my supervisor who was a renowned TV and film producer. One of the most exciting tasks I got to work on as an intern was the production of a new show titled Border Crossings. This show, hosted by one of my coworkers, broadcasts the latest in American music entertainment to audiences in Indonesia. A number of accomplished artists including, Jon Bon Jovi, O’Town, and Paul McDonald have appeared on the show. This aspect of the internship was particularly valuable because it was relevant to some of the lessons learned in my Diplomacy courses about transnational communication and globalization.

During one of the show’s segments, I was given the opportunity to learn how to host the show and work the camera equipment. Being a guest host requires that one consider the timing and delivery of their lines whilst being conscious of their facial expressions and movements on-camera. It was an experience that took me out of my comfort zone. Although I was incredibly nervous about being on camera, I recognized that this was an opportunity that would enhance my own professional development.

Being at Seton Hall University’s School of Diplomacy provided me with the necessary skills to excel in this position. My background in international relations made me accustomed to the ever-changing nature of the television production studio. At the School of Diplomacy, we learn to constantly inform ourselves on international news developments whether it be climate change, international conflict, or refugee crises. Working at a multimedia news agency is much the same. The time I have spent at Voice of America has been impactful for my own professional development, as well as my growth as a student. The skills that I have learned with Voice of America will certainly help me as I enter the job market and prepare for the next opportunity.