To understand how the New York City Theater District became the entertainment hub of the world it is today, it is important that we first begin looking at its history. The theater district can trace its origins back to around the early 1900s. Around the start of the 1900s, theaters within New York City began to move around as a result of cheaper real estate prices. This resulted in many theaters from New York City locations, such as Madison Square Garden, to the area of what we now know as the theater district of Manhattan. Theaters such as the Lyceum and New Amsterdam were both established around this time and proved to be very popular. In addition, electricity and the widespread adoption of electric lightbulbs had made Times Square even more lively than ever before, and it was not long before the rest of the theater district followed suit and enjoyed similar success. By the 1920s, the theater district had begun enjoying massive success, alongside the financial success and overall good times of the “roaring twenties”, yet, the Great Depression had a massive effect on its success and popularity. With the nation in crisis, and money being short, the theater district saw less and less visitors and lost more and more business as the years went on. The subsequent war and initial cold war additionally had a massive effect on business, and the district fell into great financial woes that continued even into the 1970s and 1980s. By the mid-1980s however, city initiatives were undertaken to help revitalize the district through cleanup projects and encouragement of new business and restaurants to settle in it. New master plans were drawn up to revitalize commercial advertising with billboards in the area, as well as zoning changes, and by the 1990s new exciting plays were in development such as “The Lion King”. Through all this, the theater district came back quite strong, and is in the condition we find it today, as a major center of entertainment and joy in the whole world.

Through this broad overview of the history of the Theater district, we are able to better understand how the Theater District became the beloved district we know today, however; it is important that we take a closer look at the Theater District of the 20th century. As mentioned previously, it was with the early 20th century that the Theater District began enjoying its massive success, and many of the current Theater District’s roots can be traced to this time period. From the beginning of the 20th century to around 1920, Broadway and the Theater District, with the aid of newly built theaters and technology had begun establishing themselves as a prominent center for entertainment in the United States of America at large. Dubbed “The Great White Way” for its white lightbulbs and bright signs, New Yorkers became mesmerized with the revitalized district, and Americans from all over began to hear of the district with some becoming anxious to visit. With both foreign and domestic plays, musicals, comedy acts, and all sorts of exciting forms of entertainment the Theater District of the 1920s was one of widespread success and popularity riding along the wave of the “roaring twenties” that had engulfed most of America at large. While prior to the 1920s the main visitors to the theater district were predominantly wealthier white New Yorkers and a more “high society” type crowd, the 1920s saw a wider increase in more middle class New Yorkers visiting the district, as well as many more visitors from outside New York. In addition, the Theater District’s slight embrace of African American talent such as Jazz and black plays led to a slightly more diverse attendance, although the majority of Theater District visitors were still white. For example, a popular play at the time in 1917 was an African American centric work by the name of In Abraham’s Bosom which “concerned a man’s attempt to establish a school for his fellow blacks; it was produced at the Provincetown Playhouse, New York City, and was awarded the Pulitzer Prize in 1927”[1]. This picture of a similar production from the time shows what this play would look like.[2] 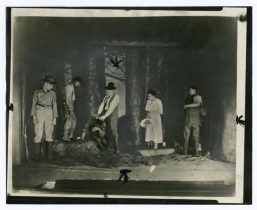 However, by the 1930s, the Great Depression and the subsequent second world war drastically changed this entire situation. With financial woes plaguing almost every American in some way, visitors to the Theater District plummeted, and soon after, theaters that had been opened to meet the demands of the roaring twenties began facing bankruptcy. To try to entice visitors, the Theater District tried to lower prices and focus more on comedies (with the belief that attendances were in the mood for something that could lighten their spirits). One of these comedic works popular at the time was a play by George Kaufman and Edna Ferber called Dinner at Eight which “opens at Broadway’s Music Box Theatre and becomes one of the biggest successes of the season, with 232 performances”[3]. This picture of a similar theatrical company from around the time helps showcase what the production could look like [4] 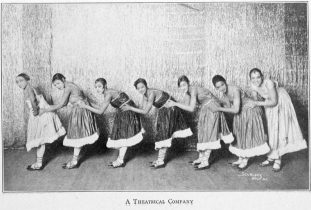 Some highlights, and assorted great spots, for tourists to check out in the theater district include: Times Square, “Ridley’s Believe it Or Not!”, the New Amsterdam/ Lyceum theaters, and of course, Broadway itself. Times Square is of course one of the most recognizable parts of New York City, and perhaps one of the most famous tourist destinations in all of America. With its all-encompassing role in Americana movies and culture, it is tough to think of a reason to not want to visit this spot if you wish to visit the theater district. Ridley’s Believe it Or Not is another classic stable of American culture as well, with the books famous and beloved by children even to this day. This particular spot involves exhibits of so called “unbelievable” American oddities and feats. Similar in vein to the “freak shows” of the past, this spot helps the curious and adventurous see things they would have never thought off, but in a humane and harmless fashion that differentiates it. Visiting the New Amsterdam and Lyceum theaters gives tourists a chance to not only see a good show, but also experience New York City history. As two of the oldest theaters in the Theater District, and the two are very historically significant, one can sit in theaters that have been around as long as the district itself. Finally, visiting Broadway theater should be the most important spot for a tourist to visit in the Theater district if they are looking for destinations. By far the most famous theater in America, and maybe even the world, it is worth at least visiting and seeing in person even if one does not wish to see a show, just to say that you saw the theater that all musical performers dream of performing in some day.

By looking at this history of New York City’s Theater District and Broadway, we have been able to gain a better understanding of this iconic American location. However, along the way, we have also been able to see how the history of this district also sheds light on America more generally, as well as the social hierarchies of New York. We see how, just like with the Theater District in the 1920s, America seems to embrace diversity and more multicultural ideals when times are going well. As the play and subsequent primary source of In Abraham’s Bosom showed, America and the Theater District accepted a play from an African American point of view during the widespread good times of the roaring twenties. However, once times get tough, like during the times of the Great Depression, America tends to become less accepting and falls back to its traditional roots and ideals. For the Theater District, this meant once again only those atop the social hierarchy visiting the Theater District, and entertainment once again becoming white focused and more traditional. Yet, the way the history of the Theater District most resembles America at large is probably how against all odds it was able to overcome its adversity and succeed at becoming one of the most powerful and successful hubs of entertainment in the world, even when no one thought it was possible.