Wall Street, although now known for its booming financial industry and the stock market, simply started out as just a wall. “Fearing attack from New England during the first Anglo-Dutch War, [Peter] Stuyvesant built a high stockade fence (later Wall Street) along the northern border of the city in 1653.[i]” Peter Stuyvesant, at the time of the Wall Street creation, was the governor of New Amsterdam. He helped create a society for the inhabitants of New Amsterdam. Wall Street was used as a barrier between the world and the control over Manhattan Island. It was meant to keep out the British as well as Native Americans looking to invade the settlement. In its creation, the settlers along with African slaves were called to help construct this wall that would provide not only protection but help divide up all of the plots of land and houses. Not only did Wall Street serve as a divider, but it also served as a meeting place. Merchants and any traders were welcome to set up their shops along the wall. This became a sense of community and foundation for the town. Furthermore, settlers would also sell their goods here, which would begin to encourage the usage of slavery in New York City as they could sell slaves in these shops. Wall Street was officially torn down in the 1699 by the British in power at the time. As seen in the Castello Plan, the wall was certainly highlighted as it became a sense of pride and power for the Dutch settlement. 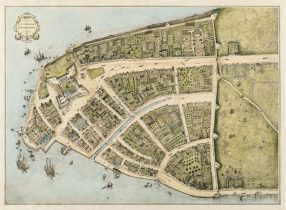 The Castello Plan depicts the layout of the settlement. The far-right, before the breakage into the plots of field shows the original Wall Street. The Stokes, Isaac Newton Phelps and John Wolcott Adams, “Redraft of the Castello Plan, New Amsterdam in 1660,” Digital Public Library of America.