Located on 265 acres of land in Bronx Park, the Bronx Zoo is one of America’s largest zoos. Opened on November 8, 1899, the zoo offered a rather difference experience to visitors. Rather than having animals in cages, the zoo offered a natural habitat for animals through the combination of the terrain of Bronx Park and the Bronx River, which flowed directly through the park. Known for its diverse amount of animals, conservation efforts to preserve native species, and grand size, the Bronx Zoo attracts over two million visitors every year.

The Wildlife Conservation Society dates back to 1895 with its previous name, the New York Zoological Society. Chartered by the state of New York on April 26, 1895, a permanent organization was founded to conserve wildlife. An article in the New York Times stated, “Its objects are to establish and maintain a zoological garden in this [New York] city for the purpose of encouraging the study of zoology, for original researches in the same kindred subjects, and of furnishing instruction and recreation for the people.”[2]

In addition to creating this permanent organization, a location for a new zoo was needed. Andrew H. Green, one of the founding members of the New York Zoological Society stated to a New York Times reporter, “Our first great objective after organization will be the choice of a site which may easily and cheaply be reached by the great masses of the people. The only restriction on the location of this site is a clause in the act of incorporation placing it within the city limits, north of One Hundred and Fifty-fifth Street.”[3] With these requirements needing to be met, the area located in the above the island of Manhattan, known as the Bronx, seemed like a perfect place to locate the zoo.

The city’s population was growing at a rapid pace and many could recognize the potential New York City had to be one of the world’s greatest metropolises. With this in mind, the New York Times described plans for the new zoo stating, “It is intended that the garden shall be one of the finest in the world—may copy after London.”[4] In addition to this, Green stated, “We should, first of all strive to make New York a greater and greater commercial centre, and with the means which brings us, develop our educational, artistic, and aesthetic features to the largest extent. We have a series of parks, which will be unrivaled when they are fully laid out; we have our two splendid museums of art and of natural history; we shall soon have a fine botanic garden and a zoological garden which will be in every way worthy of the greatness of our city.”[5] Since New York City was becoming more and more inhabited, many New Yorkers felt like the zoo would be a place for people to unwind and relax. This is similar to the purpose of the construction of Central Park.

When beginning to prepare the new zoo, the New York Zoological Society began to run into some complications. There were many sites that the society had in mind for the zoo, but they felt the southern portion of the Bronx Park would be a suitable location. In an effort to acquire this large plot of land, Professor Henry F. Osborn was sent on behalf of the New York Zoological Society to appear before the Sinking Funds Commission in order to set aside this portion of the park by the city for the purpose of the zoological garden.[6] In doing so, the city of New York would set aside funds to help aid in the construction of the zoo.

In an act to help push for funds to build the zoo, Osborn went on to say, “It is the present intention of the Executive Committee to recommend that the Zoological Park shall be open to free admission for six days in each week, and that one day only shall be set apart for the benefit of members of the society, students, and artists, and for repairs. The field exhibits, the river, and the woods will be open to the public at all times.”[7] The zoo would function just like any other park in New York City and would be free to all guests. This would give access to all New Yorkers and would not only educate them about wildlife, but would give them a leisurely activity.

In order to create a zoo of this mass size and to replicate the natural habitat of the animals, the Bronx Park had many of the requirements the New York Zoological Society felt necessary to house the zoo. The land was described as being, “merely a tract of rough, unimproved land, partly meadow and partly timbered, through which flows the Bronx River…It possess four natural basins, in which ponds of great value the collections, as well as to the landscape effects, can easily be constructed. Its situation, contour, and forestry all combine to give this spot an evenness of temperature not possessed by any other site of those available.”[8]

With the description of the land needed for the zoological park, it is evident that this zoo would be different from any other in the world. Osborn goes on to say, “A zoological park in which the larger and more important native animals have free range in large inclosures, where a satisfactory attempt can be made to copy or suggest natural haunts, and where visitors can find enjoyment in the contemplation of fine, healthy animals amid beautiful natural surroundings, is quite different from even the best fifty-acre menagerie.”[9]

Beginning with its opening in November of 1899, the Bronx Zoo encompassed exhibits where visitors could be one with the animals. The adoption of cage-free exhibits created a sense of visitors being able to feel like they were in the natural habitat of these animals. These types of exhibits were revolutionary for their time, and many other zoos soon began to follow the exhibit structure of the Bronx Zoo. Carls Michael Specials writes in Toronto’s The Star, “The new exhibits are following a long tradition at the zoo, which has always been one of the most innovative of the world’s many zoos. The Bronx Zoo was the first in America to open a predator-prey exhibit set in an open, natural setting where lions and antelope roam an African velt as real as Kenya. Fortunately for the antelope, the two are separated by moats.”[10] 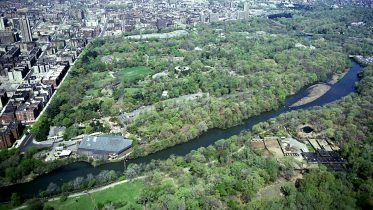 In addition to the Bronx Zoo providing exhibits that mimic African safaris, the zoo also had many exhibits that provide animals from around the world a place similar to their natural habitat. Specials goes on to write, “In one corner of the zoo’s property is the 38-acre (that’s larger than the entire London Zoo) Wild Asia exhibit, where a monorail whisks you around a timbered landscape and over the Bronx River to see some magnificent creatures, including a handsome family of Siberian tigers, a galumphing herd of Indian elephants and a slab-sided Indian rhino and her baby.”[11] This exhibit still exists and the monorail operates still to this day.

The Bronx Zoo allows children to educate themselves about wildlife and conservation with first-hand experience. Rather than just having a typical petting zoo, “[the Bronx Zoo] allow kids to imagine they are turtles by crawling into over-sized turtle shells, and lets them slide down the inside of a tree like a squirrel. There is a spider web on to which they can climb, snail shells to burrow under, and a prairie dog colony where the kids can pretend they are prairie dogs for a few moments.”[12]

Throughout the years, the Bronx Zoo has been able to bring many animals from throughout the world; and in doing so, has also be able to protect many endangered species. “In 1999, the $43 million Congo Gorilla Forest opened, featuring several different climates and a viewing tunnel for visitors. The zoo’s $8.5 million Tiger Mountain exhibit opened in 2003, allowing visitors an eye-level (actually eye-to-eye level: the Siberian tigers are behind two-inch-thick glass) view where once the animals could be seen only via a Monorail ride. The habitat features heated rocks and cooled water, allowing the tigers a climate-controlled environment. The exhibit is an outgrowth of a partnership between American and Russian biologists, one of the fruits of the zoo’s research missions.”[13] 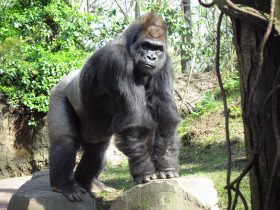 Although the Bronx Zoo focuses on conservation of wildlife, there are many that believe zoos are simply for economic benefit. Jozef Keulartz discusses the education, awareness, and advocacy zoos must practice in his journal, “Captivity for Conservation? Zoos at a Crossroads.” He writes, “Education in the context of the integrated approach must be fully geared to the conservation of species and wildlife. First of all, the animals should be shown in an environment which resembles their natural habitat as closely as possible—where they get the best chance to develop behavior typical of their own species. Secondly, the visitor must not be overcome by a numbering sense of helplessness.”[14] Keulartz believes that the Bronx Zoo has been able to accomplish these two goals. He goes on to write, “Congo Gorilla Forest, a project of 2.7 hectares in Bronx Zoo dedicated to wild animals and habitats from central Africa, offers such a chance. It provides visitors with an opportunity to make a direct contribution to the conservation of the African rainforest by allowing them to name the project that will benefit from the three-dollar supplement on their admission fee. The initiative raises one million dollars a year for fieldwork.”[15] 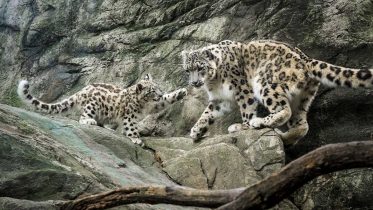