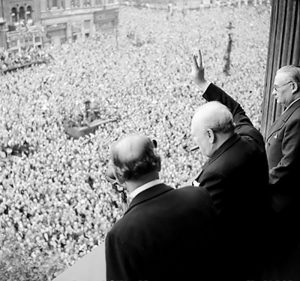 On May 7, 1945 Germany surrendered unconditionally to the Allies. The “Act of Military Surrender” was signed in Rheims, France in the headquarters of General Dwight Eisenhower, the Supreme Allied commander. It went into effect on May 8th, ending the terrible conflict that began with the Nazi attack on Poland on September 1, 1939.

The report by military historian Rick Atkinson in The Wall Street Journal ends with Prime Minister Winston Churchill’s words on the challenge of rebuilding devastated Europe: “Forward, unflinching, unswerving, indomitable, till the whole task is done and the whole world safe and clean.” I presume that he meant safe from military attack and from polluting and polemical rhetoric.

The Wall Street Journal also published Benjamin Balint’s review of the biography of historian Lucy S. Dawidowicz (1915-1990) by Nancy Sinkoff, From Left to Right (Detroit: Wayne State Press). Dawidowicz’s book, The War Against the Jews, 1933-1945 (New York: Holt, Rinehart and Winston, 1975) was very important. Balint remarks “where others had interpreted the genocide of the Jews more as a byproduct of the impersonal machinery of Germany’s war aims than a result of any special anti-Jewish animus, Dawidowicz understood what the Germans euphemistically call the ‘Final Solution’ as an intentional part of Nazi racial ideology, and end in itself.”

The tragedy of the entire Nazi period began in 1933 with official acts of bigotry against the Jews in Germany, as well as promotion of every kind of violence that culminated in the horrendous atrocities against Jews under the cover of war, blaming them for the world’s woes.

We have hoped that concerted efforts on the part of many people of good will to eliminate such hatred have been successful. However, Rabbi David Sandmel of the Anti-Defamation League has given a somber message recently: see “On Social Media, Haredi and Orthodox Jewish Communities are Scapegoated and Blamed for Covid-19.” The work of education and alert reactions to signs of stereotyping in local communities continue to be necessary everywhere!