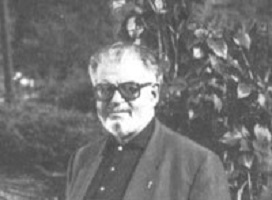 The centennial of a birth is a good time to remember the life of a benefactor. Kurt Hruby was born in Austria in 1921, the son of an Austrian Christian who divorced his Jewish wife after the Nazis took over Austria in March 1938. Kurt joined his mother in her flight to Palestine. There he acquired a fluency in modern Hebrew and a profound knowledge of the Ashkenazi (eastern European) rabbinic tradition. His survey of “Post Biblical History of the Jews” is published in The New Catholic Encyclopedia Supplement 2010.

On visits to Paris in the 1960s and 70s I would spend time in the library of the Fathers of Sion. There I met Father Hruby and benefited from his erudition and sense of humor. On occasion we met at international gatherings of those promoting Christian-Jewish relations. He was editor of the Swiss journal Judaica from the early 1970s until his death.

Father Hruby was a younger member of the generation of pioneers who prepared the Church for the Second Vatican Council and the new encounter between Christians and Jews. May they rest in peace and may our work build upon the foundation that they set in place!