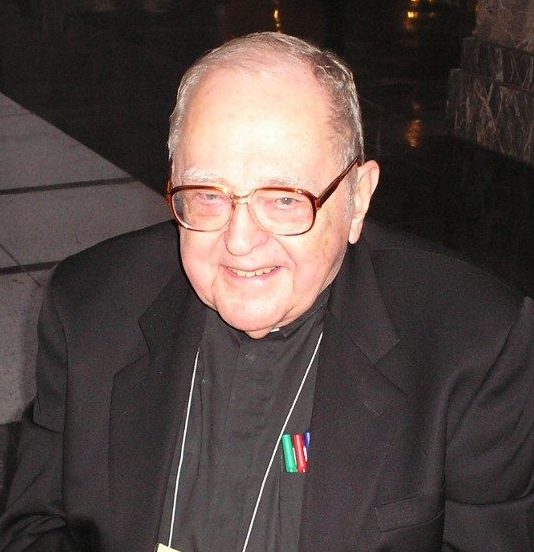 The passing of Father Fitzmyer from this world to the Heavenly Kingdom has evoked the response of many scholars and friends in the field of biblical studies. For them he is acclaimed as among the best of the giants from the era that began before the Second Vatican Council. Along with Raymond E. Brown, he was at Johns Hopkins University in the later years of William F. Albright, whose work in Biblical archeology brought great attention to the North American contribution in a field long dominated by German, British and French scholars. In 1957 Fitzmyer and Brown made a concordance of the unpublished fragments of the Dead Sea Scrolls. More than a decade later this work became the basis for an effort to overcome the lack of access by scholars to the numerous fragments parceled out to a select few. Then the Huntingdon Library made its photographic copy of the unpublished texts available to credentialed outsiders. Overcoming the secrecy about this treasure hoard had been broken, not by Fitzmyer and Brown but by outsiders.

In 1962 Jesuits Fitzmyer and Glanzman published An Introductory Bibliography for the Study of Scripture. Young students like myself looked eagerly for more publications by this team. Certainly Fitzmyer’s work moved outward and upward to embrace the Aramaic Qumran texts like the Genesis Apocraphon and the Semitic background to the New Testament. Later, under the aegis of the Anchor Bible commentaries edited by David Noel Freedman, another Albright disciple, Fitzmyer published important commentaries on the Lucan and Pauline corpus.

The Jerome Biblical Commentary, printed in New Jersey and now in its third revised edition, brought the Catholic contribution in biblical studies to the attention of seminarians and clergy throughout the English-speaking world. At times students list the editors as Brown, Fitzmyer and O. Carm! Roland E. Murphy, the third of this triumvirate, belonged to an order whose initials are not as familiar to students of the Bible as S.J. and S.S.

After a lecture by Fr. Fitzmyer at Campion Hall in Oxford in 1973, an anxious listener asked: “In the light of modern exegesis, what is the Church going to teach?” The reply was short: “She will teach what she always taught!”

Father Fitzmyer continued his scholarly work long after he became Professor Emeritus at The Catholic University of America. May he now enjoy the fullness of understanding the Word that he served so well!