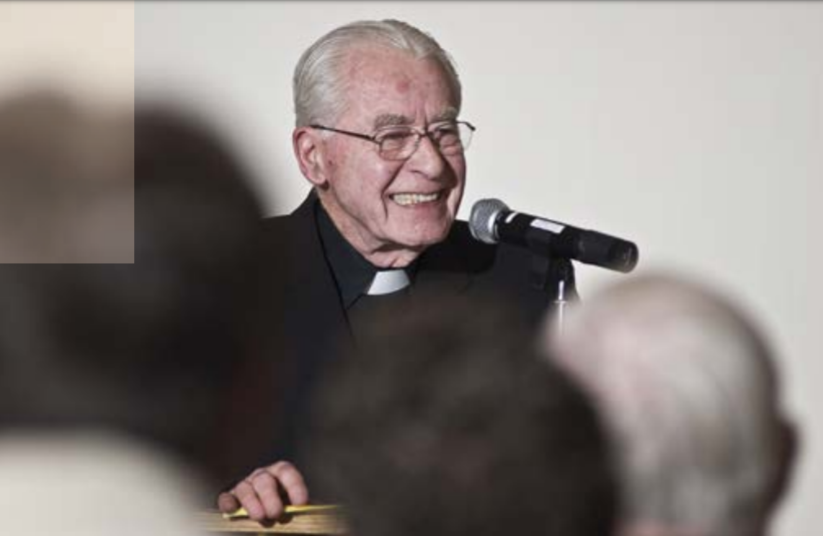 Father Gerard Sloyan delivering the 2008 Gerety Lecture in the Chapel of the Good Shepherd at Seton Hall University.

Father Sloyan recently celebrated a major anniversary of his ordination to the priesthood for the Diocese of Trenton, N.J. Its paper, The Monitor, reviewed many highlights in his ministry, which focused on higher education, with an impact on the study of Sacred Scripture, liturgy, catechetics and Catholic-Jewish relations. The contribution of Father Sloyan to these interrelated areas was the subject of Sister Alice Swartz’s doctoral dissertation, “Gerard Stephen Sloyan: A Career in Bible and Liturgy and a Ministry to all People of God, 1950-1995” for Drew University, building on her Master’s degree in Jewish-Christian Studies.

The Monitor story by Lynnea Mumola, “A Lifetime of Love of the Gospel,” offers a delightful review of Father Sloyan’s life, but this should be supplemented to include his work for the Institute of Judaeo-Christian Studies. He is the only surviving member of the original editorial board that assisted Father John M. Oesterreicher in producing the five volumes of The Bridge from 1955-1970.

In the Spring semester 1983 Father Sloyan was visiting professor in Seton Hall’s Department of Religion; during this time he taught a course on The Acts of the Apostles in the Jewish-Christian Studies Graduate Program. A loyal alumnus of the Immaculate Conception Seminary School of Theology and a good friend of the Institute of Judaeo-Christian Studies, Father Sloyan will celebrate his hundredth birthday on December 13, 2019. We wish him well, ad mea vesrim (to 120)!