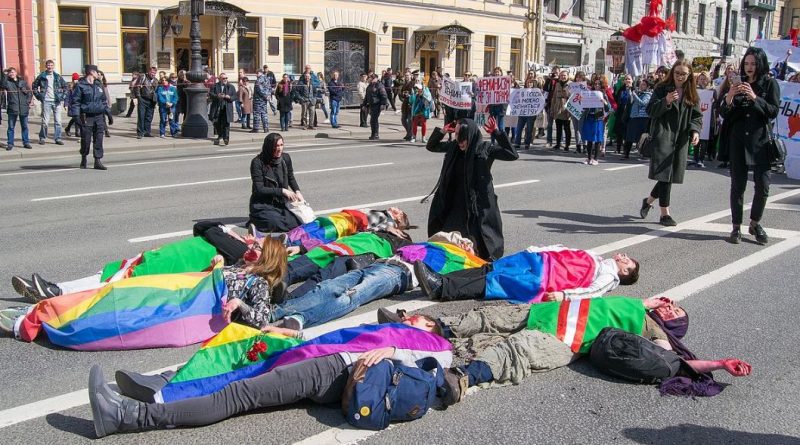 In 2017, Chechen authorities detained, beat, tortured, and even killed gay Chechens. In 2019, it’s happening again. This is a stark reminder of how the Soviet authorities, in the long 1960s (early 1960s through the start of President Jimmy Carter in 1977), arrested and killed Soviet Jews for wanting to leave a nation that made life hell for them. How do we prevent history from repeating itself? We must look at how citizens in the U.S. fought for the rights of the Soviet Jews. While the context of the LGBTQI Chechens and the Soviet Jews are unique, there are lessons that can assist American policy makers to end the present-day persecution of LGBTQI Chechens.

In the 60s and 70s, Soviet activists focused on religious freedom and emigration to Israel were denied exit visas to leave the Soviet Union and were labeled refuseniks. Soviet authorities believed that a mass exodus would signal to the world that citizens weren’t happy at home. In her book From Selma to Moscow, Sarah Snyder mentions, “Once classified as refuseniks, Soviet Jews lost jobs and faced harassment for wanting to emigrate.” Authorities destroyed passports, arrested, and in the worse cases, killed many for dissidence and protesting their own mistreatment. As prisoners, Soviet Jews were beaten, put in solitary confinement, tortured, and killed.

In 2017, when the news broke of the one-hundred Chechen gay men who were beaten, tortured, and killed in concentration-camp type detention centers, there was widespread criticism from the international community. The U.S. State Department condemned the persecution and Nikki Haley spoke against it at the UN.

International pressure coaxed Vladimir Putin to prompt an investigation into the 2017 events and a Western media crew was allowed into Chechnya. In 2018, an the Organization for Security and Cooperation in Europe (OSCE) report confirmed that LGTQI Chechens were indeed being persecuted. In 2019, 40 have been detained, including women, and two killed. Like the Soviet Jews of the 60s, “Passports [of LGBTQI Chechens] are being confiscated and destroyed by the authorities, so even when people are released, they are trapped in Chechnya,” reported Amnesty International.

In the 60s, the White House, unwilling to upset a détente with the Soviet Union, felt that more could be gained in that relationship by overlooking human rights violations. As election time rolled around, the administration could no longer ignore the mass protests, numerous letters written by Americans and public outrage. Political opponents criticized the administration for how little it had done on the issue. Henry Kissinger and President Nixon eventually choose quiet diplomacy, which initially got a promise from the Soviets to “possibly” release 60,000 Jews. Congressmen even traveled to Moscow and met officials. When they returned to the U.S., some made private discussions with Soviet officials public in a boastful we-got-them-to-do-what-we-want way. This angered Soviet officials because they believed that those statements damaged their reputation further, instead of helping them save face. Instead of 60,000, only 48,000 Jews were released. It is important to note that the U.S. would not have acted had there not been a mass public uproar to take strong action. Kissinger himself had said that the issue had no place in U.S. foreign policy.

There are four actions that can be done to stop the persecutions in Chechnya: First, rights groups should maintain consistency in organizing marches, demonstrations, protests, and write or call your local representative events; making public statements isn’t enough. Second, Congress should take the lead on this issue. New congressmembers, likened to the congressional activists of the long 60s, should make statements on social media and resort to quiet diplomacy with Russian officials. Third, rights groups, the media, and activists should pressure the current administration to fill the position of the U.S. LGBTQI Envoy, which is yet to be appointed since Randy Berry left the post. Mechanisms like the Office of the High Commissioner on Human Rights and OSCE should pressure Russia to allow Victor Madrigal-Borloz, the Independent Expert on protection against violence and discrimination based on sexual orientation and gender identity access to Chechnya to conduct a report. Former U.S. Ambassador to OSCE, Daniel Baer, along with the U.N. LGBTQI Core Group and other LGBTQI allies in international governments can help in facilitating this process. Fourth, the U.S. should encourage allies (like Albania, a moderately LGBTQI-friendly state, which shares the same communist past and a Muslim majority as Chechnya) to engage in dialogue with Russian and Chechen authorities on the matter.

NBC News stated, “The Trump administration is launching a global campaign to end the criminalization of homosexuality.” Why is there no mention of gay Chechens on the White House agenda? None of the LGBTQI rights organizations have been approached to participate in such a plan. We cannot wait for the White House to invite us to the table. Everyday Americans in the long 60s forced the government to act. The same can and must be done today to stop the killings and persecution of LGBTQI Chechens today.