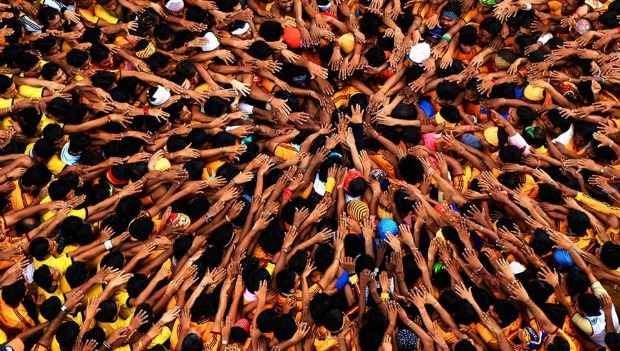 Today the world is filled with problems for which there appear no simple solutions. Brexit has proven to be well nigh unresolvable. The U.S. is withdrawing from the global leadership which gave birth to post-war internationalism. Refugee crises across the globe put economic strain on countries who can least bear the pressure of a sudden rise in population. There is a growing gap between the rich and the poor. Climate Change threatens global stability. And with the rise of nationalist ideologies, international cooperation and global stability appear seriously endangered.

Global norms of cooperation and human rights are being tested and remain resilient, but the continued barrage of international crises is eliciting solutions which push the world further apart instead of pulling it closer together. Nationalism and sovereigntism are touted as quick fixes to problems which are inherently international in their scope. Isolationist foreign policies, however, do little to insulate nations from these international crises. Interdependence is irreversible and delaying action only worsens these crises. Despite clear evidence of their ineffectiveness, these policies are garnering significant public support.

There are many who are actively countering this rise of separatism and retrogression, turning their attention to activism in the realm of politics or human rights. Many believe that strengthening the groups which oppose separation will diminish their power. This tug-of-war approach, however, is flawed. For a pull in one direction, before long, elicits a counter-pull from the other side with U.S. presidential election cycles serving as a perfect example; opposing parties cycle in and out of power in an almost predictable manner.

What is needed is an approach which is comprehensive, unifies, and elicits the best that the right and the left have to offer towards building a constructive future. Though, the problems of international interdependence play out largely within the backdrop of politics and are framed in terms of political decisions, their solution lies elsewhere. Political paradigms, like all aspects of human society, are constructed by the co-action of the units of which they are composed. In democratic societies, political ideologies arise from within the societies they represent and culture creates the political reality. Politics does not define culture, it is a reflection of it. Consequently, a lasting solution to political problems must be based in societal transformation. What is needed is a comprehensive shift of human culture away from that which is selfish and isolates, towards that which is inclusive and conscious of the whole. What is needed is a shift to a culture based on responsible relationships, moral discernment, and goodwill. What is needed is a culture of the heart.

‘Heart’ in this instance is not limited to sentimentality, emotional expression, or romantic love. The heart, rather, is the mechanism that creates, builds, and conditions all personal and extra-personal relationships. It encompasses relationships between individuals; between an individual and their communal, societal, national, and international group; and intra-group relations—between communities, societies, and nations.

The heart has a deep symbolism which holds a particular significance for group relationships. Symbolically, the heart distributes life throughout the entire group, much like the physical heart distributes blood throughout an organism. The heart is that which gives life, purpose, and significance to an individual or a group. Via the heart, the self identifies with the other and thereby constructs an identity based upon a perfecting of the relationship between the individual unit and the whole of which it is part.

In a culture of the heart, relationships satisfy both personal and group responsibility. Through the eyes of the heart, individual and group responsibilities are rarely in contradiction, because the heart knows that personal identity is based in (and upon) one’s participation in a community or group. In Western countries, this relationship is obscured by a culture of hyper-individualism. Particularly in the United States, the focus on individual liberties has instilled a dichotic attitude of self versus the whole. For many, American identity is firmly based in the triumph of the individual self over the other. The shift from hyper-individualism to hyper-nationalism is not a difficult one to make.

In many African cultures, individualism and binding societal responsibilities are not perceived as mutually exclusive. The identity of the individual is not separate from the identity of the group. The individual is an integral part of the group, and the group is an integral part of the individual. There are two sayings from Southern Africa which express this relationship: “A man is a man because of others,” and, “Life is when you are together, alone you are an animal.” In these cultures, individual and group identity co-exist. Instead of one interfering with the other, both identities support the other. The concept of ubuntu, from the South African Zulu community, often translated “I am because we are,” defines human-ness as endowed not by a transcendent God, but by the community in which one exists. Ubuntu is also translated, “A person is a person through other people” and is often applied beyond one’s communal group to encompass all of humanity.

A culture of the heart must also be characterized by moral discernment. While, the heart is capable of direct moral perception, its correct interpretation and expression requires the discerning, reasoning nature of the mind. It is not uncommon, in Western culture, for the mind to dominate the heart. Moral decisions often come secondary to the maximization of profit, for example, or the accomplishment of some important task. Decisions bereft of heart, however, are often short-sighted and so are prone to error. In these instances, only one separated part is seen, instead of the whole picture. This whole picture includes the way in which the part fits into the whole, and thus how the part affects the whole. While the mind interprets and analyzes, it is the heart that must lead, because it is the organ of group perception—the vision that true leadership requires.

The heart combines reason with morality, and so is the source of goodwill—that active expression of impersonal, creative love which unifies and restores wholeness. Goodwill is love expressed as kindness, respect, understanding, and all that the heart recognizes as good. Dr. Martin Luther King, Jr. preached frequently about the redemptive nature of goodwill. When the redemptive nature of goodwill is applied to our societies, it makes right out of wrong, rather than simply condemning that which errs. Goodwill, in all its simplicity, is an expression of all the various functions of the heart. It is the result of vision, relationship, and right identification. It also distributes life, as goodness, throughout the society in which one exists.

Why It Is Needed

The culture of the heart is needed in order restore wholeness to a world which has become imbalanced. Globalization and rapid technological advancements have led to new and severe challenges. In an increasingly interdependent world, wrong action has increasingly augmented effects. Thus, actions which rebuke the realities of a unified, international organism, are having increasingly harmful effects. Interdependence and modernization mean that we are now interconnected as much by our problems as by our successes. A more deeply integrated world has had overall beneficial effects but has unleashed new problems which can only be solved through a deepening of international cooperation.

There is a need to redefine prosperity from economic accumulation to a prosperity based upon the quality of relationship and the quality of culture. The quality of a society is determined by its ability to express relationships in alignment with the values of the heart. This quality is based upon a recognition of the power of the whole and by the will to unify—to build cooperation, resolve antagonisms, and unite disparate units into a community of strong and lasting relationships.

The culture of the heart respects the least within each society: the impoverished, the weak, minorities, and those historically disenfranchised. Everyone is equal in liberties and rights, and they are equal because they are part of the whole. This communal culture requires ending injustice by ending poverty, discrimination, and caring for the environment in which we all live—the culture of the heart extends not just to humanity but to all life on the planet. Only when equality and justice for the least among us has been achieved, will a culture of the heart prosper. Let us not be deterred by voices of separation, hate, retrogression, or bigotry and let us unite around a culture of the heart.

Michael Galloway is a M.A. candidate in Diplomacy and International Relations at Seton Hall University with specializations in Foreign Policy Analysis and Global Negotiation and Conflict Management. Michael also serves as an Associate Editor for the Journal.