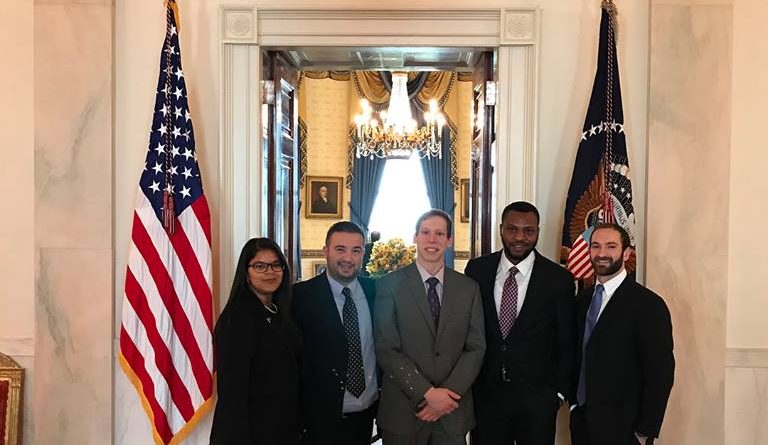 In September 2017, Mr. Mohamad Mirghahari was named the School of Diplomacy and International Relations’ inaugural Abd El-Kader Fellow. Through this fellowship, graduate students were presented with an opening to have hands-on experience with a real-world policy issue. A team of graduate students were selected as researchers, Oluwagbemiga Oyeneye (Myself), James Meil, Michelle Perez, and William Virgili. The fellowship was timely, as President Trump had then recently announced his strategy for South Asia which included a political settlement with the Taliban as a step towards concluding the ongoing war in Afghanistan. Through the fellowship, Seton Hall University got the nod from the Office of South Asia Analysis, Bureau of Intelligence and Research of the United States Department of States to work on a research project. Immediately, we were tasked with coming up with creative ideas on how to build a basic relationship of trust with the Taliban necessary to move towards substantive peace talks.

Facilitated by the mentoring Fellow, we had a weekly virtual classroom session which were essentially brainstorming sessions, where we sifted through multiple ideas to establish a trusting relationship. We received feedback from Military commanders in Afghanistan, former diplomats in Pakistan, and concluded with a policy paper review by the State Department. Mr. Harold Ingram also had check-ins to review our progress and provide feedback. We also had in-person meetings, at least once every month, and in some of the meetings we were graced with guest lecturers.

We carried out in-depth research of policy statements, Afghan society, and the Taliban themselves. The team adopted a five-pillar approach which examined the history of the United States’ past peace talks with the Taliban; the Taliban’s interest and structure; the Afghan educational system; the role of women in peacebuilding; and the life of Emir Abd El-Kader. Using the five-pillar system, we proposed a strategy of selective engagement, vocational trade education to provide an alternative means for junior Taliban combatants to support their livelihood, women’s reintegration, and using the life and teachings of Emir Abd El-Kader as a strategic counter-narrative to the dominant Taliban messages. The final research paper was titled: “Shifting Narratives: Moving Towards Substantive Peace Talks” which was presented at the State Department on April 12, 2018.

The AEK Fellowship/project is unique in several ways. First, it provided mentorship and quality networking opportunities for the participating students. The Fellowship was not just about the project itself, but also about mentoring students to help them build skills to use throughout their careers. For instance, as student researchers, we had the opportunity to hold a one-on-one conversation, set up by Mr. Mirghahari, with a top professional within our individual specified field of interest. The purpose of the conversations was to build long-lasting relationships that can be leveraged upon for professional success.

Second, we had the direct experience of working on a real-world policy issue. The war in Afghanistan is one of the most pressing issues in South Asia which the State Department is currently grappling with. It was such a rare privilege that we could be involved in proposing recommendations on such a massive project as building peace in Afghanistan. Initially, this was a huge challenge and we felt the pressure. However, we had encouraging supports from our project mentor, Mr. Mirghahari, and that of Mr. Harold Ingram, the Director Office of South Asia Analysis, Bureau of Intelligence and Research.

In addition, the project was a tremendous learning experience. Mr. Mirghahari’s experiences working with different governmental institutions were really brought to bear. We learned how to brief policy experts on issue, and how to present findings to senior officials in a sharp and precise manner. Due to the rigorous preparation that went into the presentations, and insightful feedbacks received from faculty members, we got commendations at the State Department for our excellent briefing skills.

Finally, the Fellowship was not all work and no play. Before our presentation at the State Department, we had a tour of the White House, enjoyed the beautiful scenery of Washington D.C and took some very nice pictures.

Oluwagbemiga Oyeneye is a first-year graduate student specializing in Global Negotiation and Conflict Management and Post-conflict State Reconstruction and Sustainability.

4 thoughts on “The Abd El-Kader Fellowship: A Reflection”