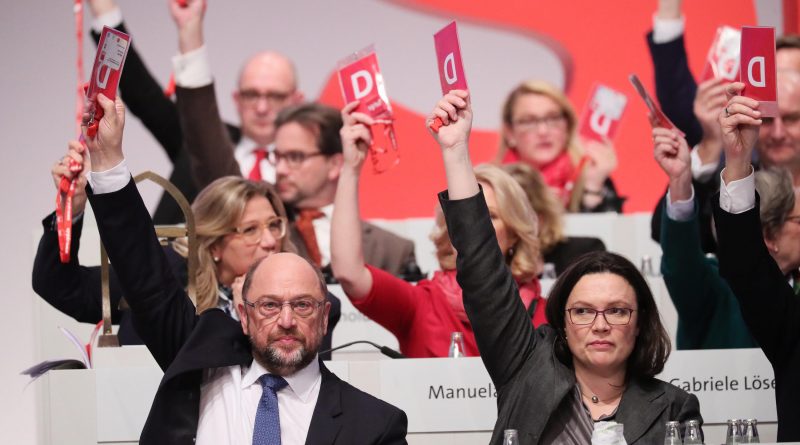 Groko and the Future of the Left

The Future of Social Democracy is being decided in Germany, or so said an article featured by Foreign Policy this past December. Hyperbolic, perhaps, but regardless that time of reckoning has finally come.  On January 21st the Social Democratic Party (SPD) voted, barely, to approve coalition talks with Angela Merkel’s Christian Democratic Union (CDU), the main center-right party. On February 7th they concluded a coalition deal that on the surface seemed to be a negotiating triumph for the SPD.

The deal hands the SPD control of the Labor, Finance, and Foreign ministries. Powerful ministerial positions to implement and shape a Social Democratic agenda both within Germany and in the EU at large.

So, why the backlash? Coalition talks have since the start divided the party. Partly this can have attributed to a broken leadership promise, SPD Chairmen Martin Schulz promised postelection that there would be no continuation of the Grand Coalition. The party’s youth wing, Jusos, has been the deal’s strongest antagonist, agitating against a deal by driving a surge in new membership to steer the party further to the left, drawing comparisons from some to Jeremey Corbyn’s Momentum that remade the UK’s Labour Party.

The critics argue that another Grand Coalition would be suicide for the party.  5 years in sharing power with conservatives has made the party lose its distinctiveness, demobilizing some voters, and shifting others further left to Die Linke or towards the swelling the ranks of the far-right Alternative for Germany (AFD). The critics seem to be correct, in the last elections the SPD recorded its lowest vote share since the end of the second world war, and the AFD entered the Bundestag, the first time a Hard-Right party has sat in the legislature since the Nazi Party.

Proponents of the deal argue that this is an opportune moment for governing. With a willing partner in the Elyse, the SPD has a chance to take the lead in Euro reform, particularly in regard to the Eurozone. Emmanuel Macron has proposed a series of Eurozone reforms to solidify the monetary union and create a transfer/investment union, which includes a Eurozone budget overseen by a finance minister. SPD leaders have begun to echo Mr. Macron’s proposals I addition to stressing the importance of Europe in the SPD’s governing philosophy.

Although the changes to the EU could prove profound, the SPD, as previously mentioned, may hold the future of Social Democracy in its hands. The demise of center-left parties across the continent is cause for concern among many, Social democracy, foundational to post-war democratic reconstruing, seems to be in full retreat. As its traditional working-class and Inteligencia constituencies have fragmented, other actors have appeared on the scene, whose commitment to democracy and liberalism is doubtful. The importance of this development has not gone unnoticed by commenters, and we wish to highlight some here.

On the SPD and Future of the Left

Jeremy Cliffe, a columnist for the Economist, lays out the case for and against the Grand Collation.

Der Spiegel, in an editorial, describes the breakdown of the SPD and CDU as German politics enters a more fragmented a chaotic period as they inch ever closer to the post-Merkel era.

Sheri Berman, Political Science Professor at Barnard College, wring in the New York Times explains why the collapse of the Center-Left matters.

Henning Meyer, an SPD member, describes for the Financial Times the path the party must take to govern and avoid disappointing its activist base.

Natalie Nougayrède, a columnist for the Guardian, remarks on how the politics of the past in a world of resurgent nationalism are just a salient as ideological or material debates.

Thomas Edsall, writing for the New York Times ruminates on Piketty and why democracy often doesn’t addresses wealth inequity despite what democratic theory tells us.

Fred Phaswana, in an Op-ed for Project Syndicate, discusses the Three Keys to a New South Africa in the post-Zuma era.