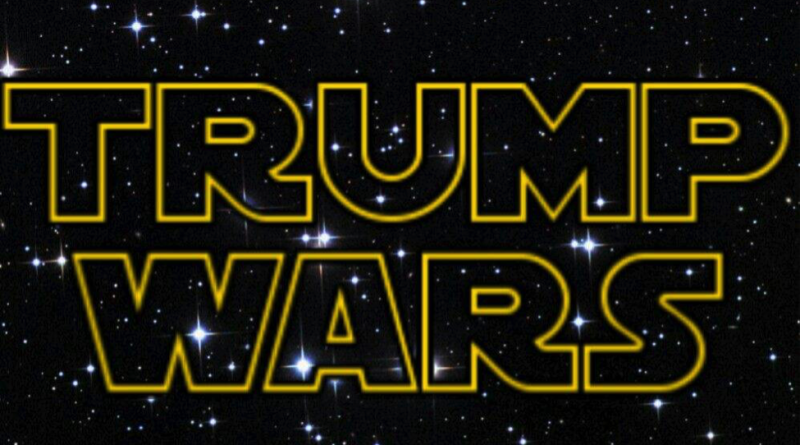 A long time ago on a continent far, far away: a period of enlightenment motivated philosophers to utilize rationality and empiricism ushering in a revolution in thought. One of these prominent thinkers was David Ricardo, who advocated against the system of mercantilism in favor of comparative advantage. Comparative advantage, along with other advancements in economic theory eventually formed the liberal school of thought in economics, promoting the ideas of free markets, and free trade supported by Adam Smith, and David Ricardo. After the Allied Powers defeated the Axis Powers in the Second World War, the United States implemented a Liberal World Order, that would promote these ideals through the use of international institutions, like the International Monetary Fund, World Bank, and General Agreement on Tariffs and Trade. However, this Order is now under threat by the rise of a new force American politics has never seen before. The rise of an unexpected “God Emperor” is now starting to implement the ancient economic arts of protectionism ending the liberal world order once and for all.

While the above may have some satirical flare to it, the executive orders to renegotiate NAFTA and withdrawal from the Trans-Pacific Partnership, threats to put 20% import tariff on Mexican goods to pay for the wall, and a 45% tariff on Chinese goods only increase the possibility of America fighting multiple trade wars. There are also twelve pieces of legislation that Congress has delegated to the president to initiate further tariffs, giving the president the necessary ammo to initiate the “tat” part of “tit-for-tat” trade wars. In the event of such a scenario, Americans will see an increase in the price of goods because the gains of comparative advantage will be negated from tariffs, sanctions, quotas, and other tools of protectionism. In that case, President Trump would indeed become a menace to our wallets and purses, but also a menace to our allies that we forged from trade. The negative payoffs of defection affect both parties when cooperation fails, threatening the stability of the liberal order America has spent decades to forge.

But if it is known that these losses occur in the event of a trade war, why would the president risk these losses? There are two basic answers to this question. First is that President Trump is “putting America first” to create jobs for American workers. He argues that unfair trade has created the high U-6 unemployment rate of 9.2%, but research has shown most of these jobs were in fact lost because of technological advances. A study published by Ball University found that 87.6% of jobs were lost to the droids, while only 13.4% were made obsolete from Free Trade agreements. The second answer is a matter of perspective. Trade models have a “light side and dark side,” that can be described through game theory.

Game theoretic models of international trade typically follow the model of repeated prisoner’s dilemma games. Repeated games suggest that “tit-for-tat” is the best strategy because the absolute gains will pay off more over time, and the “shadow of the future” will provide incentive to maintain cooperative behavior, as opposed to the typical constraints of the one-shot prisoner’s dilemma. However, this repeated prisoner’s dilemma game is a “dark side” interpretation of how international trade occurs. This is because the traditional payoffs suggest that defection is optimal to cooperation because of the choice of cooperation has when the other player defects (see the table below).

Thus, the defection strategy has a Nash Equilibria outcome because “no player has anything to gain by changing their own strategy in lieu of other player’s choices.” Although the “shadow of the future” usually pushes players to still pick cooperation in lieu of repetition Trump’s perspective disagrees with such reasoning. The outcome of D/C, which yields a payoff of 3/0 (3 for USA, 0 for the opponent), corresponds with Trump’s priority of bringing back American jobs. For Trump, the greater payoff of job creation, is greater than the individual gains of cooperation, but this disregards the price increase from protectionism which comparative advantage argues against. To account for the preference of having lower prices and comparative advantage’s merits let us look at the “light side” model of the stag-hunt game.

In this game, players have the option of either cooperating on a hunt to catch the stag (trade) by staying at their post, or going off on their own to catch a rabbit (protectionism). The stag-hunt game payoffs emulate a preference for cooperation by having a higher payoff than the betrayal payoff, thus accounting for comparative advantage, which was not achieved in the previous model.

Other than the payoffs, a stag-hunt and prisoner’s dilemma have mostly the same interchangeable rules, but the former has two Nash equilibria, whereas the latter only has one. The cooperation strategy outcome (C/C) also is Pareto-efficient, which stops the trade war scenario because it pays off without each player hurting each other. The difference in ordinal preference between the two games can be seen below (numbers in boxes being the order of player’s preferences):

Remember, all the events in the Star Wars films were caused by a trade war between the Galactic Republic and Trade federation. Instability in global economic affairs is consequential. The preference of the prisoner’s dilemma certainly captures Trump’s reasoning, but it fails to recognize the principles of comparative advantage that the United States has been promoting through the Liberal World Order since 1944. This interpretation risks the United States “turning to the dark side” or away from the order it has spent decades to forge, creating losses for everyone. But at least in such an event, China is “willing” to take the helm of globalization to hopefully avoid a world plunged into chaos under anarchy. If Trump really wants to “Make America Great Again,” he should remember it was economic theory that did make us great in the first place.

Michael Hamilton is the social media associate at the Journal of Diplomacy. He is pursuing a dual master degree in MBA/Diplomacy and International Relations at Seton Hall University. He specializes in using game theory, economics, and existentialism to explain international relations.