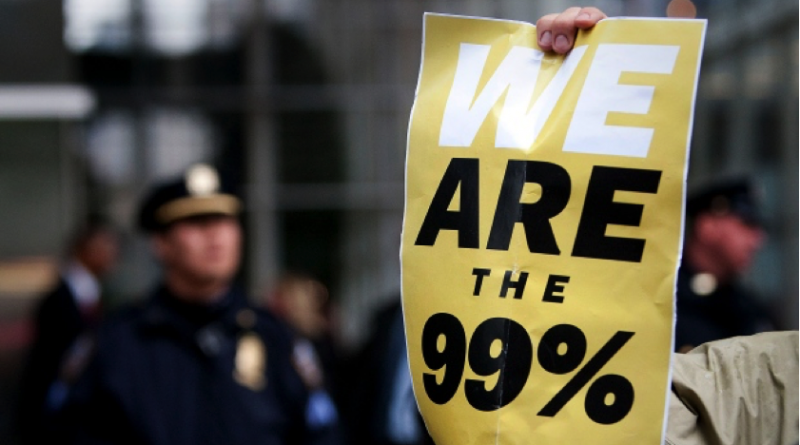 “The people are going to rise from the water. We’re going to shut this system down. I hear the voice of my granddaughter saying shut this system down,” the organizers and protesters sang and shouted. During a recent march, their words echoed through the alleyways of skyscrapers on a windy day in New York City. Organizers and protesters attended the march to express their agonized pain of runaway inequality while others came to support the voiceless individuals in various communities throughout the global community.

The United States is seen as a superpower, policing force and possessor of one of the largest military forces in today’s modern world. Perhaps it can play a crucial role in outlining ways the international community can uplift individuals that seem left behind in a system that does not give them full ability to thrive.

In Les Leopold’s Runaway Inequality, he describes runaway inequality as “a negative shifting in the way we see ourselves and the way we govern, a dying American Dream, the unraveling of the practice of democracy, and the indication that each individual are losing their influence in the governing of our society.” The question here is how citizens are able to be productive and valued constituents by their representatives. As runaway inequality continues, overlooked citizens are continuously buried under a system that essentially sought for life, liberty, and the pursuit of happiness.

The case of the water crisis in Flint, Michigan illustrates one of many cases enabled by the structural inequality. In a city of approximately 98,000 residents and 41.6% of its population lives below the poverty line, reports found the government failed to address the needs of the residents in Flint, which is a majority Black, African-American community, and created a water crisis continuing to this day.

“Let me be blunt. This was a failure of government at all levels. Local, state, and federal officials- we all failed the families of Flint,” Rick Snyder said during an opening statement to the House Committee on Oversight and Government Reform. As a result, many residents have lead poising, prone to ongoing health challenges, and face the devaluation of their properties. And because of the relationship between wealth and property, the ill fate of the upcoming generations, in particular the children, will be subjected to continuous social injustices derived from such inequality.

Traces of the same problems can be seen in China. Although Beijing is improving its inequality gap, its government needs to address the concerns of rural residents. A Chinese farmer made headlines recently after he was executed for killing a village official after his house was demolished. According to reports, the home was demolished to aid in constructing a new property development and address the demand of urbanization.

According to researchers, the average urban income in China is currently 2.7 higher than those in rural communities compared to 3.3 times higher in 2009. Yet, rural residents are still hindered by residency system which fails to give them ability to settle in cities to gain fair access to opportunities including schools, universities, and jobs. It also prevents Chinese farmers sell their land which is their most prized possession and chains them to a cycle of inequality.

The cases seen in the United States and China are some of the numerous cases individuals face in the global community. For example, India’s caste system prevents many opportunities for the Dalits, an oppressed group that finds itself on the bottom of India’s caste system. The Dalits are also victims of many forms of injustices including sex trafficking, bride trafficking and organ trafficking.

Unfortunately, in all these cases, people were not able to thrive, mainly due to the lack of some basic opportunities such as education, access to good resources, and fair representation. Perhaps once these essential rights are addressed there would be a decrease in numerous movements and campaigns including Black Lives Matters, Not for Sale, and the Dalits Movement. Rather than questioning their qualifications to protest, it is better to observe what human rights are denied. Once government officials address the structural social injustices of minorities, the aching labor pains of runaway equality can be alleviated.