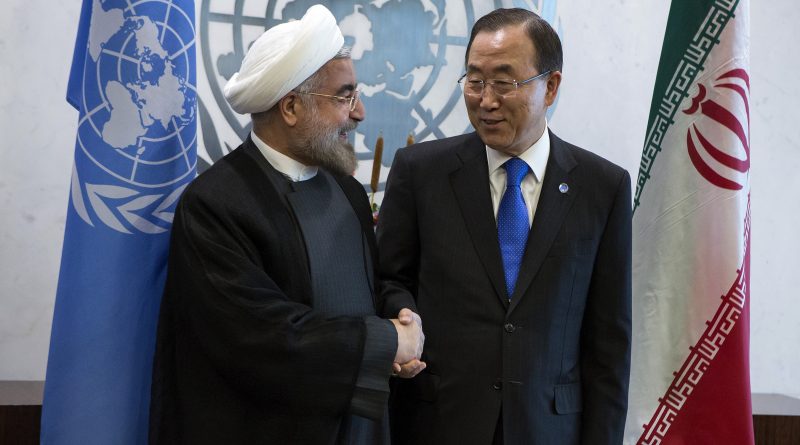 Last week UN Secretary General Ban Ki-Moon submitted a report to the General Assembly on the situation of human rights in Iran, expressing deep concern over the rate of “executions, floggings, arbitrary arrests and detentions, unfair trials, denial of access to medical care and possible torture and ill-treatment.”

In the 19-page report, Ban Ki-Moon called on the Iranian government to step up efforts in meeting requirements regarding all the reported violations and cooperate with human rights monitoring bodies. He also called on the government to create space for civil society actors to act freely without any fear of detention.

Iranian President Hassan Rouhani has been under international pressure over deteriorating situation of human rights in the country, especially following the landmark nuclear deal in July 2015. As the head of the state his administration is considered to be responsible for addressing these issues under international law. However the structure of the power system in Iran is in a way that Rouhani has very limited authority over what is being conducted on the issue of human rights. Ignoring this structure puts international community’s efforts under a big question mark and threatens its effectiveness.

The head of the judiciary branch in Iran is appointed by the Supreme Leader who is the highest authority in the country. He, who should be a cleric, has full authority over the whole judiciary system and does not need any sort of approval from the parliament or the president for selecting people to fill top positions in his organization.

The president in Iran has a minister of justice in the cabinet but he or she can only choose the minister from the candidates who are offered by the head of judiciary. Based on the constitution the justice minister is responsible for all sorts of affairs related to the judiciary and parliament in the government. Law enforcement is conducted through an organization called the “Disciplinary Force of the Islamic Republic of Iran” or NAJA, which also operates under the authority of the Supreme Leader. NAJA is affiliated with the state ministry but all the top positions are held by those appointed by the leader.

Arbitrary arrests, detentions, pressure on media, limiting freedom on speech and nearly all that is mentioned in the UN Secretary General’s report falls under the authority of either of these organizations. On the other hand the military in Iran is a powerful body that does not wait for the Intelligence or State Ministry to conduct its domestic operations. It has its own intelligence, its own detention centers and has full authority, in practice, to override any government ruling regarding political activism.

Rouhani, who is largely supported by the reformists in Iran, is facing mounting pressure from fundamentalists inside the country for opening the country to the international system. Ending the nuclear standoff with the West, improving relations with regional countries and bolstering the economy of the country have been his top foreign policy priorities. Obstacles have been countless in his way. As he was trying to ease tensions with regional neighbors, especially Saudi Arabia, a group of people attacked the Saudi Embassy in Tehran which led to a complete freeze of diplomatic ties between the two countries. Participants saw the call for the protest in military-affiliated social media pages. The government has been trying to remove Iran from the FATF blacklist for promoting trade and investment; a move not welcomed by fundamentalists who have launched a propaganda campaign in Iran depicting FATF as a tool for putting ‘independent states’ under pressure.

Rouhani supporters both in the government and parliament have been attempting at improving the human rights situation but they are criticized at the same time for not doing enough. A reformist-dominated commission in the Parliament recently submitted a proposal to amend the current law on execution of drug-related criminals. The same attempts have been made here and there regarding press and political activity freedom but they are very much limited and improvement is achieved very slowly.

Looking into the domestic power structure of countries is critical to effectiveness of international cooperation. Too much pressure on fragile sub-structures might destroy the only available avenues for achieving results. In the case of Iran there seems to be room for focusing on other sides of the system and bringing them under international focus to achieve more cooperation.

One thought on “Pushing the Right Buttons in Iran”