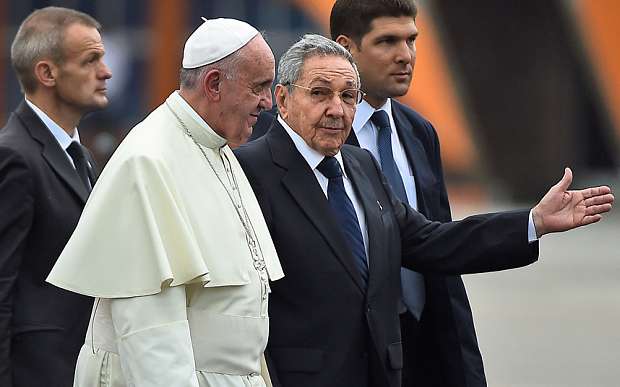 America’s Eastern Seaboard is in an uproar preparing for the Pope’s visit this week. Security details are being deployed; an alternating majority of Manhattan’s streets will be shut down, and large swaths of Washington, DC traffic will be rerouted in anticipation of Pope Francis’ arrival. Thousands of people are expected to be in attendance at the Masses  held in Washington’s Saint Matthew’s Cathedral, New York’s Madison Square Garden, and Philadelphia’s Cathedral Basilica of Saints Peter and Paul.  This is all part of a whirlwind North American tour for His Eminence the Pope, who has just concluded three days in Cuba, where hundreds of thousands came out in Havana, Cuba on Sunday morning for a glimpse of the Holy Father.. The decision to visit both the United States and Cuba on the same trip was a very calculated, strategic decision on the part of the Pope, even if his reasons for visiting the two countries are very different.

The Pope’s visit to the two nations “acknowledges his role in encouraging detente between them,” but also allows the Holy Father to address concerns about poverty and to remind people of their responsibility to assist others in need. Pope Francis intends to visit the homeless, impoverished, and imprisoned during his trip to the United States, in a marked departure from his Cuban itinerary, where he visited with Cuba’s youth and families. While much of his activity in Cuba can be attributed to sensitivity towards the Castro regime (making the elevation of social issues impolitic), the Pope’s efforts to specifically highlight serious inequalities existing in the United States should not be ignored as hypocrisy or an inability to be evenhanded in judgement.

That said, the Pope’s visit to Cuba has been ripe with deference and sensitivity. The New York Times stated,

From his own experiences in the 1970s, when Argentina was ruled by a military dictatorship, Francis knows the complexity, dangers and difficult compromises of coexisting with repressive authorities. For decades, the Cuban church has been wary of inciting the wrath of a Communist government that all but marginalized it after the 1959 revolution, when priests were cast out, religious schools were closed and the state was declared atheist.

The same New York Times article references limitations of the Church in Cuban life, for it cannot run schools or hospitals and exists in deference to the government in all matters. Pope Francis spoke in defense of religious liberty, the importance of the family, and the “need to serve.” Pope Francis clearly wants the Catholic Church to participate in providing more social services for the people of Cuba.

On Sunday, along with morning Mass, Pope Francis had the opportunity to sit down with Fidel Castro and his family, and later met with President Raúl Castro. His meeting with Fidel Castro lasted about 30-40 minutes and was described as “very familiar; very informal.” The Pope had a much livelier conversation with the current president later in the day, with an exchange of gifts, and Castro was quoted saying, “he was so impressed with the Pope that he might even consider a return to the Church.” The Miami Herald article notes that numbers of people participating in Cuba’s religious orders are increasing, and with the current sitting President’s blessing Cuba may very well see a resurgence in Catholicism in the once-atheist state.

Pope Francis made every effort to avoid political posturing during his time in Cuba, except for references to the peace process in Havana taking place between the Colombian government and their largest guerrilla organization, FARC (The Revolutionary Armed Forces in Colombia), and trying to inspire the Cuban government to open its doors to the Catholic Church. It does appear, however, that the very nature of the Pope’s decision to visit Cuba before traveling to the United States made plenty of political points all on its own.