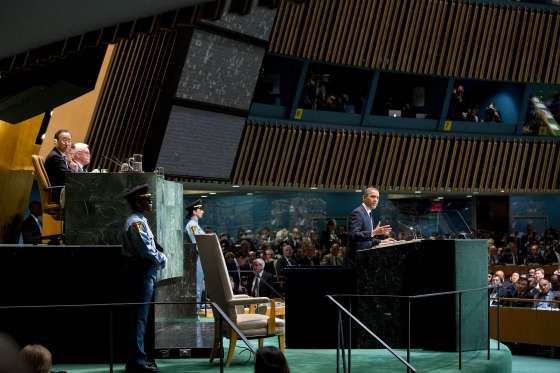 President Obama spoke Sunday at the United Nations. In his speech, President Obama, who said he would be blunt, spoke about poverty and disease and ways to eradicate both. President Obama was most direct when speaking about women’s rights, mentioning that how states treat their women can serve as an indicator of how successful a country is. He also stated that he has little patience when countries claim tradition as an excuse to discriminate. Mr. Obama will meet Monday with Russian President Vladimir Putin to discuss the buildup of Russian arms in Syria, a topic shared in earlier editions of the Diplomacy Cable. The New York Times has this story.

Europe, and the European Union, could be facing their next secessionist crises. Pro-secessionist parties took control of Catalonia’s regional government, with two pro-independence parties combining to win an absolute majority of seats in the region’s 135-seat parliament. Catalonia is home to the city of Barcelona and is one of Spain’s wealthiest regions. The national government has promised to use the country’s constitutional courts as a way to block any independence movements from the Catalans, but it would not be a surprise to see Spain thrown into political turmoil because of the new separatist government. The Guardian provides news on the elections.

The French have carried out their first military strikes on ISIS positions in Syria, according to the Washington Post. Six French jet fighters struck an Islamic State training camp in eastern Syria, President Francois Hollande announced. These attacks are the beginning of an expansion of the French mission against ISIS. The strikes make good on the French President’s promise to do more in response to the militant group. Hollande was quoted as saying, “We’re sure there were no casualties,” among civilians.

Reuters reports that the death toll from of a crush at the annual Hajj pilgrimage, outside Mecca, has risen to 769. This is the second recent tragedy in the area surrounding Mecca, with a crane collapse killing scores earlier in September. The crush occurred as two large groups converged at a major crossroads. Iran has called for criminal investigations into this tragedy, which left over 900 wounded as well.

Chinese President Xi Jinping has pledged to establish a fund that will provide $2bn to assist developing countries. He also said China would cancel debts to the world’s least developed nations. The Chinese pledge will provide a good start to the UN’s new Global Goals for Sustainable Development. These goals seek to eradicate poverty, among other issues, by 2030. BBC has this story.

CNN reports that the United States is releasing the last British national from Guantanamo Bay, who has been held since 2002. Guantanamo still has 115 detainees, as of September 17. Shaker Aamer was arrested in 2001 in Afghanistan by U.S. forces for allegedly leading a military unit under Osama bin Laden, accusations that he denied.