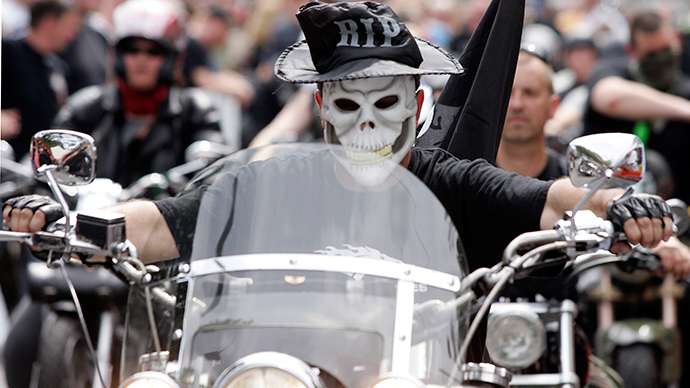 What does international law, biker gangs, and the all-too-common phrase ‘boots on the ground’ have to do with one another in the fight against the Islamic State?  The answer to that question comes from recent statements from the Government of the Netherlands which has given their approval of biker gangs fighting the Islamic State in Syria and Iraq alongside the Kurdish Peshmerga, the armed fighters of the Kurdistan Regional Government (KRG).  The Dutch government, who has recently dropped their first shells from F-16 Jets on the Islamic State, does not see any legal issues with allowing civilian biker gangs to join in the military fighting of foreign wars.  The Dutch public prosecutor Wim de Bruin said, “joining a foreign armed force was previously punishable, now it’s no longer forbidden.”  When the foreign fighters return from the frontlines of war, they will not be charged with any federal crimes from the government or abroad.

The Western nations have found an ally in the Middle East against the Islamic State and wish to support their Kurdish comrade.   Nations from across the world are providing military support, operations support, aerial bombardment, and humanitarian assistance to minorities in the region.  Until this point, however, the services they have provided have been from the government.  Now, civilian fighters who wish to become combatants in the foreign war are being sponsored by their host or native state.  Foreign fighters who are not fighting for terrorists organizations, which is illegal under Chapter 7 of the UN Charter as of the 24th of September, 2014, and who are not considered mercenaries, are allowed to engage in fighting across borders.  Under the Geneva Conventions, Article 47, you are a mercenary if you are a person who…

a) Is specially recruited locally or abroad in order to fight in an armed conflict;

(b) Does, in fact, take a direct part in the hostilities;

(c) Is motivated to take part in the hostilities essentially by the desire for private gain and, in fact, is promised, by or on behalf of a Party to the conflict, material compensation substantially in excess of that promised or paid to combatants of similar ranks and functions in the armed forces of that Party;

(e) Is not a member of the armed forces of a Party to the conflict; and

(F) Has not been sent by a State which is not a Party to the conflict on official duty as a member of its armed forces.

One must fall into all seven categories in order to be considered a mercenary.

This shows that becoming a foreign fighter is not breaking international law, but is allowing civilian biker gangs to fight in a foreign war against the Islamic State the most virtuous act that a state can uphold?  I think not. This opens the door to many problems the state may face if the civilian population begins to fight wars which should be one of the essential duties of any central government in order to protect their citizens.  Just because it is in the interests of the state to allow biker gangs to join the fight against the Islamic State, and it’s not illegal to do so, does not justify allowing a states’ civilians to fight in a war in which the government is already involved.

Moreover, the only reason the Netherlands is allowing biker gangs to enter into Iraq and Syria to fight is because they have the same discomfort as the United States and the other E.U. states, which is that they want to avoid ‘boots on the ground’ at all costs. If the Netherlands can relax their laws to allow biker gangs to fight the war without sending troops then they will gladly pursue that option unless pressured not to do so.  Western nations want to avoid the perception of ‘foreign occupiers’ by which the Middle Eastern states have often painted them.  Similarly, they wish to avoid a protracted conflict where casualties get broadcasted on the nightly world news.

This urge is logical but allowing civilian biker gangs to do a states’ dirty work for them is not the appropriate policy action.  The decorous policy would be to renounce civilian fighting in foreign wars, reestablish the existing law on the books – making it illegal to fight in foreign wars, and intensify the military resources to fight the Islamic State.  The state has the right and obligation to protect its citizens and interests using national defense forces as that means.  ‘Boots on the ground’ should only be those of the national defense forces and not those of biker gangs, whether or not international or domestic laws forbids civilian foreign fighters.  If the state relies on the civilian population to fight their wars, a dismal precedent would most certainly arise.