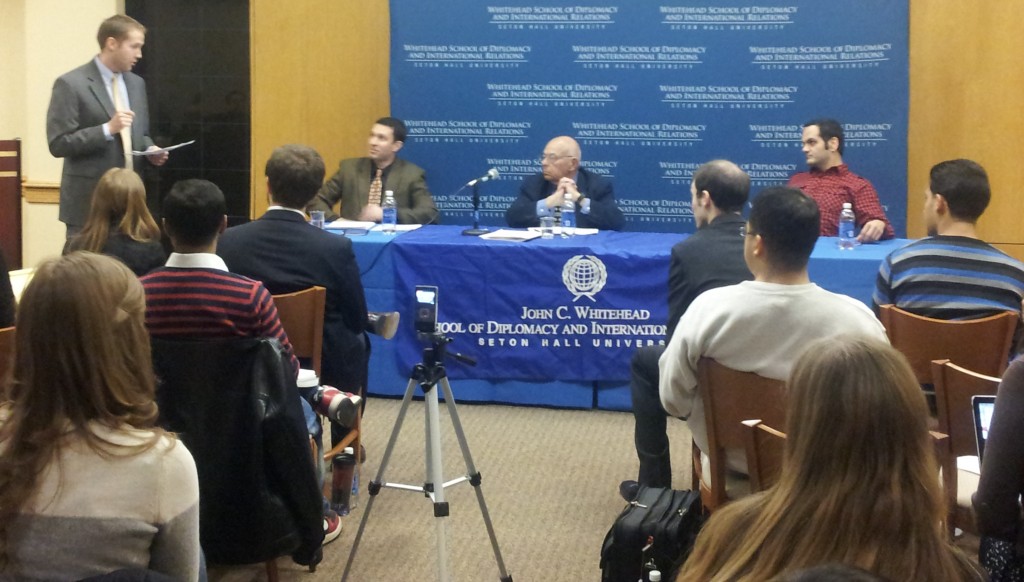 On Thursday, February 7th the Whitehead Journal of Diplomacy had the privilege of hosting a panel on Iran and the Nuclear Bomb. This event was paneled by Dr. Christopher Fererro, a professor at Seton Hall University’s Whitehead School of Diplomacy and International Relations, also an expert on Iran, and U.S.-Iran relations. The second panelist was Dr. Ali Mostashari, an Iranian professor of the Sociotechnical Systems Program at Stevens Institute of Technology. And moderating the panel was Dr. Edward Friedman Professor Emeritus of Technology Management at the Stevens Institute of Technology.

Dr. Friedman began the event with a discussion on the topic stating that this “Panel could not be more current” considering the magnitude Iran plays as a topic in foreign policy and demonstrated this by referring to an article written by Thomas Erdbrink and David E. Sanger titled: “U.S. Increases Pressure of Economic War on Tehran” on the front page of the New York Times. The report laid out four key actions that Iran must take for the U.S. to agree to any deal on nuclear development. The deal called for an “Iranian agreement to limit the number of centrifuges that produce uranium, a cap on the amount of fuel in Iranian hands, and an agreement to ship its most potent stockpiles — the stuff that can be quickly converted to bomb fuel — out of the country. It would also have to agree to expose its history of nuclear work, including any on weapons technology.” The Erdbrink and Sanger’s article and many others like it demonstrate how Iran is perceived in the national media. Or what Dr. Ferrero describes as a perception of Iran as a “WMD (Weapons of Mass Destruction) seeking, terrorist sponsoring, a geopolitical and irrational state.” However, as the discussion proceeded, what followed was a set of rational and objective observations of Iran and the present relations between the U.S. and Iran.

Dr. Mostashari offered an interesting perspective on Iran; stating that Iran is one of the best nations at handling crisis and so much so that for it to be under such pressure from the international community is, in a way, a welcomed opportunity. Additionally, a second insight Dr. Mostashari offered was a notion that the title of a “Rogue” state was beneficial to Iran. Dr. Mostashari proceeded to explain that somewhere in or after the Clinton Administration Iran learned that the title of a rogue state allowed them to operate in any fashion and if it upset the international community they can refer back to the title of a rogue state. However, Dr. Mostashari did offer important insights as an Iranian, which can allow Americans to evaluate Iran more effectively.

First and foremost this idea that Iran is a rogue nation is completely absurd. Iranian’s are, as Dr. Mostashari posited, are very pragmatic people; “Investing in what makes sense” as Dr. Ferrero put it. Internally it is about political power, economic power, and influence. Iran’s political leaders are not irrational actors but very rational, struggling for something, albeit power, prosperity, security or something else, they are rational actors. Secondly, when it comes to the issue of nuclear development, Iran is operating in a game theory. They will continue to drag their feet as they continue development. Sure Iran wants influence but do they want the bomb? No, they want the capability to have one if need be. Iran is going to continue development of its nuclear capabilities despite the “tightening of the screws” as Sanger and Erdbrink describe the economic sanctions. Ultimately, Dr. Mostashari stated that nuclear negotiations are the wrong negotiations to be addressing at this time.

Dr. Ferrrero offered an American expert opinion on Iran but for the most part his observations reflected that of Dr. Mostashari. Dr. Ferrero commented on the United States’ foreign policy of “tightening the screws” through economic pressures to obtain what the U.S. desires. In what Dr. Ferrero refers to a “Coercive Diplomacy 101” when you are coercing a state there needs to be the belief that if the state acquiesces to the demands those pressures will cease. Iran does not believe or trust that this is the case with the United States. Trust between the two states is completely lacking but remains a key component to accomplishing anything. In addition to a lack of trust being a barrier, there are the hardliners, especially in the U.S. If the U.S. were to reach an agreement with Iran many would claim Iran blackmailed the world to get what it wanted. Of course this would be a gross mischaracterization but it remains a difficulty to overcome.

The important things to remember from the panel are that Iran is a pragmatic and rational state. Although many might like to believe that they are a terrorist run rogue state, this is simply not the case. Trust is something that the Iran-U.S. relationships has found wanting. However, it is also pertinent to understand that these lessons are just starting blocks. They will not solve the discourse that has been sown through the 60 years of tenuous relationships but it provides for something that can lead to a peaceful resolve.