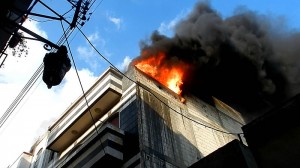 The Arab Spring ultimately led to protracted violence in Syria, and there is little sign of relief for the civilians caught between the opposition forces and the Assad regime. With increasing sectarian violence and a limited ability to fully understand the nature of the conflict, Syria presents a precarious case for humanitarian action.

International actors have been hesitant to hastily deploy military aid, and the United States itself, despite having vested interests in the region, is not directly willing to confront the increasing disaster with its own military resources. The threat of extremist Islamic groups within the opposition, the increasing insecurity of weapons of mass destruction (WMDs), and the spillover problems for key US allies creates a unique challenge for the US in determining the best way to respond. Failing to address this civil war will limit US ambitions and interests in the Middle East by demonstrating a lack of support for key allies and by allowing terrorism and unstable weapons developments to proliferate among the participants of this conflict.

Currently, the US has attempted to address this conflict in a manner that would not entail military commitment. Through statements calling for the resignation of Assad, international diplomacy, sanctions, humanitarian and non-lethal aid, intelligence coordination, disrupting arms shipments, contingency planning, and preparing the opposition for a leadership transition, the Obama administration has attempted to target various facets of the problem in order to weaken the Assad regime. The US has so far enjoyed limited success in these efforts, and despite plans within the UN Security Council for multilateral efforts, key resolutions were blocked by Russia and China. Humanitarian and non-lethal aid has been deployed to support the opposition without aiding the extremist factions within the opposition. Sanctions have been targeting those in support of Assad, and further measures could be taken to continue weaken the current regime. In an effort to increase stability after the end of the Assad regime, the US Institute for Peace has met with members of the opposition in order to begin the crucial process of navigating sectarian problems. The transition after the end of the regime will be crucial for the opposition because of the threat of increased fragmentation threatens the stability of any new government. These efforts demonstrate multiple facets of interest for the US and the desire to keep from committing militarily, but the continuation and even escalation of the violence signals a need for the US to reconsider its policy options in response to the several security threats in the region.

In examining the crisis, two main avenues of action could be taken: continuing the non-military strategies that were just presented or committing military resources to mitigate the consequences of a protracted conflict. The first avenue would sustain current US policy and continue to apply diplomatic pressure to the Assad regime while providing limited support to the opposition. While variations within the first avenue could be discussed through new policy options, this would merely build upon current policies when it is time to discuss a second avenue.  As a deviation from the current policy stance, the second avenue would require an analysis of the capabilities of the US to implement more forceful measures in Syria. This option has a variety of possible policy outcomes, but examining three potential policy opportunities for military support will demonstrate the varying complexities of the violence in Syria matched with vital US national interests.

If the destabilizing conditions of conflict in Syria increase with a continued lack of consensus among international actors in how to address the situation, the US has several options for deploying more forceful measures. From full-scale intervention to supplying weapons, various levels of commitment and force can be implemented to ensure the protection of US interests in the region. Three specific policy options have been discussed by analysts, and each offers a different level of commitment matched with a specific national interest priority. The policies discussed have been to: conditionally provide weapons or other military assistance to the opposition forces, deploy air strikes to protect established safe zones for civilians and armed opposition, and military intervention to secure chemical weapons. Each should be analyzed through a cost-benefit analysis and assessed upon its potential for success.

The first option provides the least amount of commitment and specifically targets the goal of regime change by empowering the opposition. Providing weapons and military technology would create a more even playing field between Assad’s forces and the opposition. This would specifically aid US national interests by creating a greater chance of success in overthrowing Assad. To this point, the US has repeatedly called for Assad to willingly step down but has refused and does not appear likely to cede power. This option would rapidly improve the likelihood of Assad’s ultimate demise without committing US troops to the region. Yet this option is also problematic given the current state of division within the opposition. The multiple factions within the opposition have increasingly shown the difficulty that will come when Assad is removed from power. As the international community attempts to create a strong and unified group to aid in the transition process, specific factions—like extremist Muslim groups—refuse to acknowledge coalition efforts. The lack of unity matched with the inability to truly ensure that the weapons will make it into the desired hands dampens the potential of success for this first option and ultimately demonstrates why the US has been hesitant to employ this strategy.

The second option raises the level of resource usage by committing the military to air strikes in order to protect specified safe zones. This option would have various levels of action subsumed within the larger category: the US could choose to participate in multilateral efforts similar to those employed in Libya in order offset large resource expenditures, or the US could choose to unilaterally act to deploy any given range of strikes. This option would fulfill US desires to protect Syrian civilians from further attacks by forcibly protecting safe zones while also providing shelter to the opposition as they fight Assad’s forces. A repercussion of this option, in addition to the necessary provision of a greater amount of resources, is the possibility for Assad to interpret these airstrikes as a violation of sovereignty and therefore issue a declaration of war which ultimately requires further US military commitment to the situation.

While the second policy option provides a middle range plan for US commitment of resources and presence of the region, the third option entails full-scale military intervention. One of the most crucial concerns for the US is the presence of WMDs, specifically chemical weapons, which could be employed by Assad’s forces or fall into the wrong hands. The Pentagon has discussed possible plans for an intervention that would specifically target these weapon depots in order to ensure the containment and dismantling of the weapons before they spread beyond the reach of the US. Yet, recent reports estimate the number of troops required for this operation to be around 75,000. Even with a lesser number of troops assigned to a potential policy option, any intervention plan would require a much higher level of resource and troop commitment that the US has been unwilling to consider due to its past and current sustained military presence in other parts of the Middle East. This option could also potentially result in a more aggressive policy by Assad which would cause further humanitarian crises and instability that would in turn create a more difficult transition process at the end of the intervention.

These three options offer a broad range of policy choices for the US in varying levels of commitment and national interest priorities. Depending on how the conflict progresses in the future, any of these three options could be employed in different circumstances. If the opposition unifies in a way that demonstrates the beginnings of a successful transition, the US would be more willing to supply arms to ensure that success. If reports of WMDs and the use of chemical weapons reach alarming levels of national security threats, the US could be compelled to act in a more extreme fashion through intervention in order to ensure regional stability. Yet the most likely plan of action given a continued stalemate would be the second option—employment of airstrikes to create safe zones. This option targets both humanitarian concerns and aid to the opposition while taking a more forceful stand against Assad. While some may counter this option by broadly reasoning against the need to protect civilians above state sovereignty, larger US national interests do play a vital role in this option. The deployment of airstrikes provides a foundation for US action while also providing the potential for further US resource commitment given how the conflict opposition unity evolves over time.

The crisis in Syria provides a complex foreign policy dilemma for the US. Refusing to act throws a negative light on US humanitarian policy and fails to uphold vital security interests in the region. Continuing current policies aimed at minimum resource commitment and diplomatic measures will further impede a resolution to the conflict as the Assad government clings to power. Resorting to military strategies may incur resource costs, but some plans—like air strike enforcement—can rely on multilateral efforts which will lesson personal costs and enforce opposition efforts on the ground. Ultimately, careful evaluation of the conflict’s progress is needed to implement a strategy that balances the security, humanitarian, and economic interests of the US while ensuring a road to stability for Syria and its neighbors.

Laurel Stone is a first year Masters candidate at the Whitehead School of Diplomacy and International Relations specializing in International Security and Global Negotiation and Conflict Resolution.