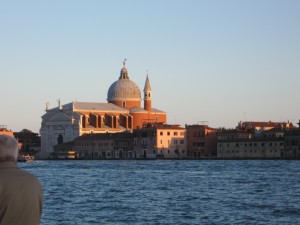 The last time I saw Venice I was nineteen years old. During the 1970s,  Jadrolinija had a car and ferry service that began in Italy, slowly made its way down the Dalmatian coast and ended in Greece. You could buy one ticket and get off and on the boat–essentially island hopping–taking as long as you liked until you reached your destination. This trip to Venice is quite different. It is not about being open to a general experience but rather on focusing on a  particular, narrow goal: finding enough information to create a bibliography of material, which either consists of ephemera or of specialized books that are printed in small press runs.  What I didn’t expect, especially during my stay in Venice, was that the underlying question raised by this trip would become much larger: what is history and who determines the narrative? History is largely interpretative, isn’t it.  I think quite often of the study trip and course I taught for Emporia University a few years ago on collective memory and memory institutions.  I am very glad that this bibliography is merely a tool, that is to say, not a text, and that it only points to information resources.

One of the exciting aspects of this trip has been having had the opportunity to visit cities, such as Venice and Padua, which formed an important part of my doctoral dissertation and subsequent research, but which at that time only existed in my mind’s eye.

Yesterday, Bruno Crevato-Selvaggi, the director of the editorial house, Musa Talia, which publishes Atti e memorie della Societa dalmata di storia patria, and Dr. Aldo Sigovini very graciously gave me a tour of the Scuola Dalmata di San Giorgio e Trifone or the “Dalmatian Club. ”  The building was bought by the Dalmatian community in the early 16th century. Its magnificent first level is open to the public and contains several paintings attributed to Carpaccio. The painting above is of St. George slaying the dragon. The picture below is of St. Augustine in his study, writing a letter to Saint Jerome. 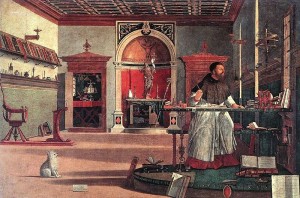 I would like to call your attention to some of the magnificent rare books that are found in the library. 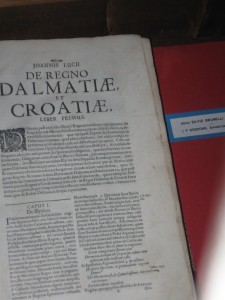 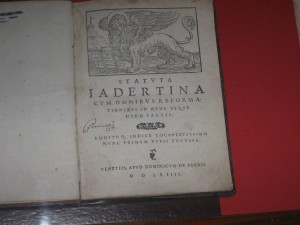 One thought on “Venice and Dalmatia/Venezia e Dalmata”