The Warburg Effect is a universal feature of cancer; it describes the phenomenon whereby cancer cells preferentially use glucose for anaerobic glycolysis, as opposed to aerobic respiration via the Krebs Cycle. In order to meet the increased energy demands using a much less efficient process for ATP production, cancer cells take-up 20-times more glucose than wild-type cells.

2-Deoxy-D-glucose (2-DG) is a chemical analog of glucose, however, cells cannot use it as a substrate for glycolysis. 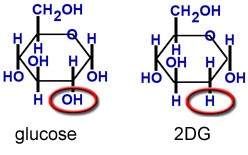 Figure 1. As a close chemical analogue of sugar, 2DG is taken up into cells by normal glucose transport mechanisms, but unlike normal sugar it cannot undergo metabolism and acts as an inhibitor of glucose metabolism (glycolysis). http://www.neurogenomex.com/research.html

It is very similar to 2-deoxy-2-(18F)fluoro-D-glucose (FDG), which is used in PET imaging to stage cancer.

2-DG is taken-up by glucose transporters and enters the glycolysis pathway.

Figure 3. The first half of glycolysis uses two ATP molecules in the phosphorylation of glucose, which is then split into two three-carbon molecules. https://courses.lumenlearning.com/ivytech-bio1-1/chapter/reading-glycolysis-2/

Like glucose, 2-DG undergoes phosphorylation by hexokinase (HK), resulting in 2-DG-6-phosphate (2-DG-6-P), which acts much differently than glucose-6-phosphate.

In contrast to glucose-6-phosphate (G-6-P) which progresses through the glycolytic pathway, 2-DG-6-P accumulates within the cell and is not metabolized further. In studies in which isolated enzymatic studies were performed, it was shown that in the subsequent reversible glycolytic step through which G-6-P is converted to fructose-6-phosphate (F-6-P), 2-DG-6-P was found to compete with the former for phosphoglucose isomerase (PGI). Thus, 2-DG was thought to block glycolysis primarily by competitively inhibiting PGI.

A secondary metabolic effect of 2-DG was shown to be noncompetitive inhibition of HK by 2-DG-6-P. As the Ki for 2-DG-6-P inhibiting HK is well in excess of that for G-6-P, it was concluded by another group that 2-DG-6-P did not inhibit HK. It is likely, however, that treatment of whole cells with 2-DG (in contrast to the studies done in isolated enzymes) leads to a buildup of 2-DG-6-P to concentrations capable of HK inhibition. This would explain results where it was shown that cells treated with 2-DG had lowered intracellular levels of G-6-P. 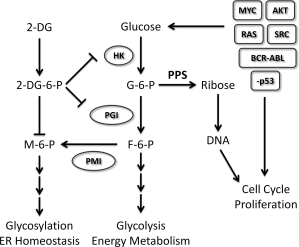 Figure 4. 2-DG exploits a universal trait of cancer. Molecular evidence clearly implicates a majority of the oncogenic events required to convert a normal cell to a tumor cell converging on the upregulation of glucose uptake and metabolism, which in turn sustains the malignant phenotype. For example, it supports uncontrolled proliferation by providing the nucleotide building blocks via the PPS (Pentose Phosphate Pathway), reprograms energy metabolism by aerobic glycolysis, and maintains ER homeostasis through proper glycosylation, and so forth. By mimicking glucose, 2-DG offers a natural means of exploiting increased glucose metabolism, a universal trait of cancer. However, as under normoxia other energy sources can be used to fuel cells and sustain their viability, 2-DG’s toxicity is more limited to tumor cells under hypoxia. Although under normoxia most tumor cells are growth inhibited by 2-DG treatment, we as well as others have found that a select number of tumor cell types in this environmental condition undergo ER stress-induced cell death. Therefore, 2-DG holds much promise for treating most if not all cancer types. Oncogenic events are indicated by rectangles and metabolic enzymes by circles. Abbreviations: 2-DG, 2-deoxy-d-glucose; 2-DG-6-P, 2-deoxy-d-glucose-6-phosphate; ER, endoplasmic reticulum; F-6-P, fructose-6-phosphate; G-6-P, glucose-6-phosphate; HK, hexokinase; M-6-P, mannose-6-phosphate; PGI, phosphoglucose isomerase; PMI, phosphomannose isomerase; PPS, pentose phosphate shunt. http://onlinelibrary.wiley.com/doi/10.1002/iub.1251/full

Due to its short half-life and the need to achieve much higher cellular concentrations to inhibit cellular metabolism, as opposed to image cells with FDG, prior efforts to use 2-DG in the clinic have failed.

Modified 2-DG for the treatment of cancer

Moleculin invented a prodrug of 2-DG to optimize it for cancer treatment, especially tumors of the central nervous system. Considering heroin, which crosses the blood-brain-barrier (BBB) versus its close analog, morphine, Moleculin acetylated 2-DG. This lead to improved pharmacokinetics, crossing the BBB, and accumulation into cells.

Heroin is chemically the diacetyl ester of morphine. While morphine has a limited ability to cross the blood brain barrier (making it a good candidate for pain killing without impairing mental function), its diacetyl form, heroin, has the ability to accumulate in the brain by 10 to 100 fold more than morphine. Once across the blood brain barrier, the acetyl groups shown in this chemical diagram are cleaved off by natural enzyme esterases, leaving pure morphine to accumulate in the brain.

We believe based on pre-clinical testing that, just like heroin, WP1122 crosses the blood brain barrier where its acetyl groups are cleaved off, allowing the resulting 2-DG to accumulate in the brain at a much higher rate than free 2-DG can do by itself. Adding to the difficulty in getting free 2-DG across the blood brain barrier in therapeutic quantities, is the relatively short half-life of 2-DG.  The free form of 2-DG is rapidly metabolized and rendered ineffective within minutes of entering the body.  In contrast, WP1122 has a half-life of approximately 6 hours, making it much more feasible to deliver quantities adequate for a therapeutic effect.

Figure 5. WP1122 crosses blood-brain-barrier by virtue of acetyl groups, much the same way that heroine crosses the BBB and morphine doesn’t. http://www.moleculin.com/technology/wp1122-2/

Moleculin is working with investigators at MD Anderson Cancer Center to advance Wp1122 to the clinic for the treatment of brain tumors. The company has discovered a modified version of WP1122, called WP1234 –