Valstar (valrubicin), the last drug approved for the treatment of superficial bladder cancer that is refractory to front-line therapy with BCG (bacillus Calmette-Guerin), entered the market in 1998. The registration study for Valstar demonstrated a twenty percent complete response rate three months following six weekly intravesical (transurethral administration into the bladder) instillations of the novel anthracycline in patients with BCG-refractory carcinoma in situ of the bladder.

When bladder cancer invades the muscle, cystectomy (removal of the bladder) is required. Therefore, it is critical to treat patients having aggressive nonmuscle-invasive bladder cancer (NMIBC) cautiously – delaying cystectomy can lead to more invasive disease, which is associated with poorer outcomes.

Interferon alpha (IFN-α) has been shown to have activity in treating patients with BCG-refractory disease:

Thirty-five patients with superficial transitional carcinoma of the bladder were treated intravesically with escalating doses of recombinant alpha-2-interferon administered weekly for 8 weeks. Of the 19 patients with high-grade intraepithelial neoplasia (17 carcinoma in situ [CIS], two severe dysplasia, all cytology positive), six (32%) had complete resolution of all histologic and cytologic evidence of disease (complete response). An additional three patients (16%) had complete resolution of CIS, but the interval appearance of a low-grade transitional cell neoplasm. Five (26%) had a partial response (complete resolution of all evidence of CIS on multiple bladder biopsies but persistently positive cytologic preparations). Sixteen patients with recurrent papillary tumors and extensive prior therapy were also treated. Four (25%) had a complete response. Twenty-three of the 35 patients had prior intravesical therapy. Seven of the 23 (30%) patients with prior intravesical chemotherapy or immunotherapy had a complete or partial response to interferon, while eight of the 12 patients (67%) without prior intravesical treatment responded. These responses were achieved with minimal local and systemic toxicity. Of the ten complete responders, five remain in continuous unmaintained remission for 18+ to 37+ months. Intracavitary alpha-2-interferon is an effective new treatment for some patients with bladder cancer.

This experience demonstrated that although IFN-α is active, its effects are not durable. So, the concept of gene therapy to deliver the IFN-α gene into the bladder began to take root. For starters, intravesical administration avoids systemic exposure of the gene and mitigates the risk of significant systemic side effects. Second, using the bladder urothehelium as a bioreactor to produce copious amounts of IFN-α would reduce the number of instillations and cost. Third, the immunomodulatory and tumor suppressive effects of IFN-α make it an ideal candidate, especially in patients who have responded previously to BCG, which acts via immune mechanisms that IFN-α enhances.

Instiladrin (rAd-IFN/Syn3) is a non-replicating adenovirus vector harboring the human IFN alpha2b gene. When combined with the excipient Syn3, intravesical administration of the rAd-IFN results in transduction of the virus into the epithelial cell lining in the bladder. The IFN alpha2b gene is incorporated into the cellular DNA resulting in the synthesis and expression of large amount of IFN alpha2b protein. FKD Therapies, a Finnish company, acquired the rights to Instiladrin from Merck in 2011. 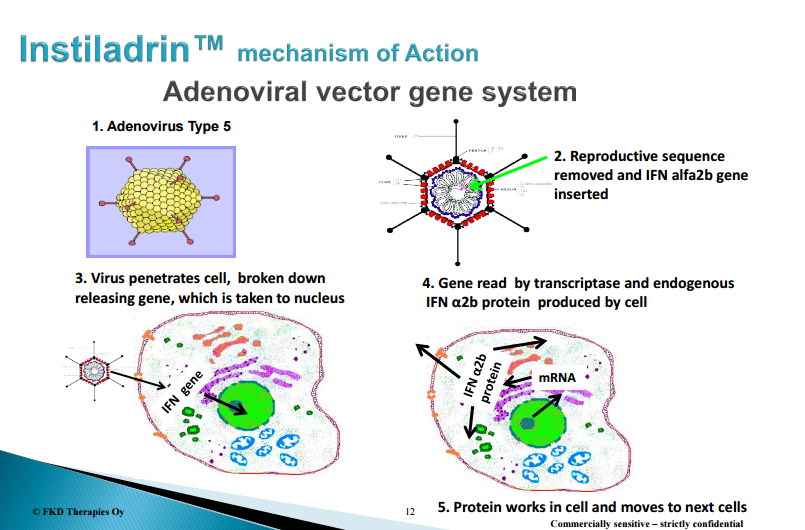 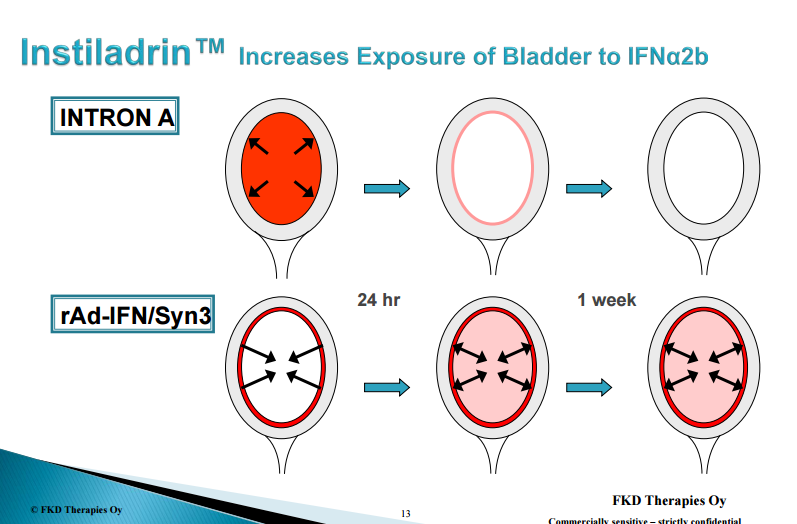 Results from a Phase 1 study were very encouraging –

Intravesical rAd-IFNα/Syn3 was well tolerated as no dose limiting toxicity was encountered. Urgency was the most common adverse event and all cases were grade 1 or 2. rAd-IFNα DNA was not detected in the blood. However, transient low serum IFNα and Syn3 levels were measured. High and prolonged dose related urine IFNα levels were achieved with the initial treatment. Of the 14 patients treated at doses of 10(10) or more particles per ml with detectable urine IFNα, 6 (43%) experienced a complete response at 3 months and 2 remained disease-free at 29.0 and 39.2 months, respectively.

The 40 patients were randomized to two doses of rAd-IFNα/Syn3, and patients who attained a complete response could be retreated every 3 months up to month 12. The primary endpoint was 12-month hgRFS (high-grade recurrence-free survival), as determined by biopsy. The goal was a 25% rate of 12-month hgRFS.

The patient population was predominantly male (33:7). The study group comprised 19 patients with relapsed disease and 21 with BCG-refractory NMIBC. Sixteen patients received three or more prior courses of BCG. A majority of the patients had CIS and nine others had a CIS component in their disease.

The efficacy data showed no difference in the overall 12-month hgRFS (35%) or the rate in patients treated with the lower doses of rAd-IFNα/Syn3 (33.3%) or the higher dose (36.8%). However, the higher dose was associated with a longer median time to high-grade recurrence (11.7 vs 3.5 months).

Twenty-three of 40 patients achieved hgRFS at 3 months; 17 maintained the status at 6 and 9 months; 14 remained in high-grade relapse-free status at 12 months. The hgRFS status did not differ by patient age or sex or whether the patient had relapsed or refractory disease.

Significant urinary levels of IFNα-2b emerged by posttreatment day 2 in all patients, providing evidence of effective gene transfer. Levels of rAd-IFNα/Syn3 did not correlate with treatment dose or clinical response. Levels of serum IFNα-2b remained low throughout the study (including no measurable IFNα-2b in 31 of 40 patients and no measurable IFNα-2b DNA), suggesting systemic safety.

A Phase III study of a recombinant adenoviral vector delivering the interferon-α gene (Instiladron) intravesically is underway – A Study to Evaluate INSTILADRIN® in Patients With High Grade, Bacillus Calmette-Guerin (BCG) Unresponsive NMIBC. One thirty-five patients with BCG-unresponsive disease will be enrolled at twenty centers across the United States:

“BCG Unresponsive” refers to patients with high grade NMIBC who are unlikely to benefit from and who will not receive further intravesical BCG. The term “BCG unresponsive” includes patients who did not respond to BCG treatment and have a persistent high grade recurrence within 12 months after BCG was initiated, and those who despite an initial complete response (CR) to BCG, relapse with high grade NMIBC within 12 months of their last intravesical treatment with BCG. The following criteria define the patients who may be included in the study: