Thromboses (venous blood clots, arterial occlusion, and pulmonary emboli) are a frequent complication of cancer and it is the second most common cause of death in cancer patients. Cancer patients represent 20% of all patients who develop venous thromboembolism (VTE) – deep vein thromboses (DVT) and pulmonary emboli (PE).  Cancer is associated with a four-fold increase in thrombosis risk, with chemotherapy elevating this risk even more. 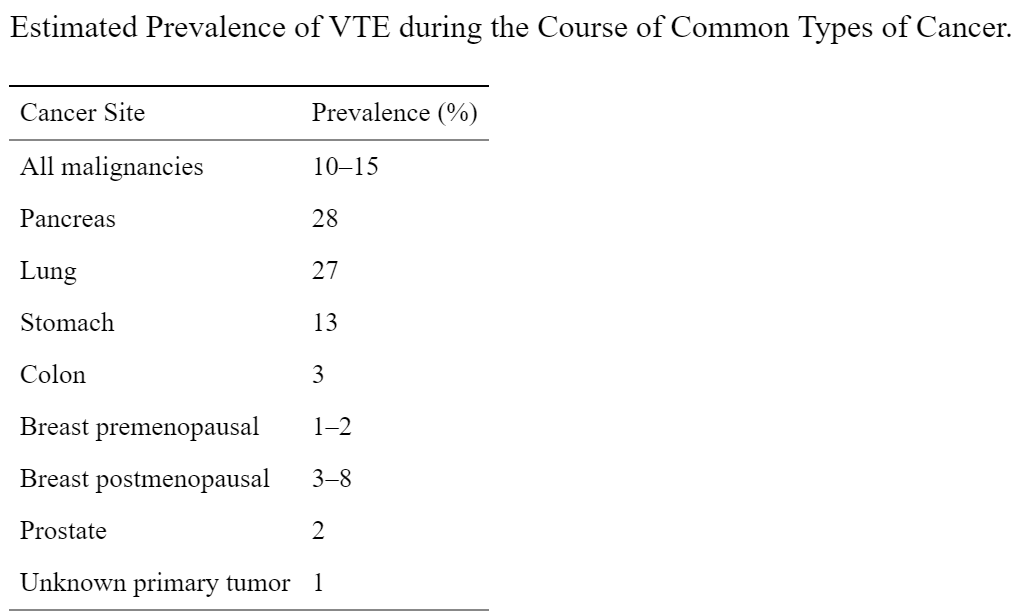 The increased risk of thrombosis in cancer patients tends to correlate well with advanced stage of disease, increased tumor volume, and prolonged hospitalization. The syndrome is associated with a poorer prognosis than in matched cancer patients without thrombosis.

Large population-based studies have shown that cancer patients have a 4–7-fold increased risk of developing venous thromboembolism compared with those without cancer. The rate of cancer-related thrombosis varies widely between published reports, from 0.6% to more than 18% depending on the type of study population, duration of follow-up, definition of thromboembolic events, and active versus passive ascertainment. The actual incidence may be even higher, exceeding 50% in autopsy series.

How does cancer induce hypercoagulability?

Prothrombotic factors in cancer include the ability of tumor cells to produce and secrete procoagulant/fibrinolytic substances and inflammatory cytokines, and the physical interaction between tumor cell and blood (monocytes, platelets, neutrophils) or vascular cells. Other mechanisms of thrombus promotion in malignancy include nonspecific factors such as the generation of acute phase reactants and necrosis (i.e., inflammation), abnormal protein metabolism (i.e., paraproteinemia), and hemodynamic compromise (i.e., stasis). In addition, anticancer therapy (i.e., surgery/chemotherapy/hormone therapy) may significantly increase the risk of thromboembolic events by similar mechanisms, e.g., procoagulant release, endothelial damage, or stimulation of tissue factor production by host cells. 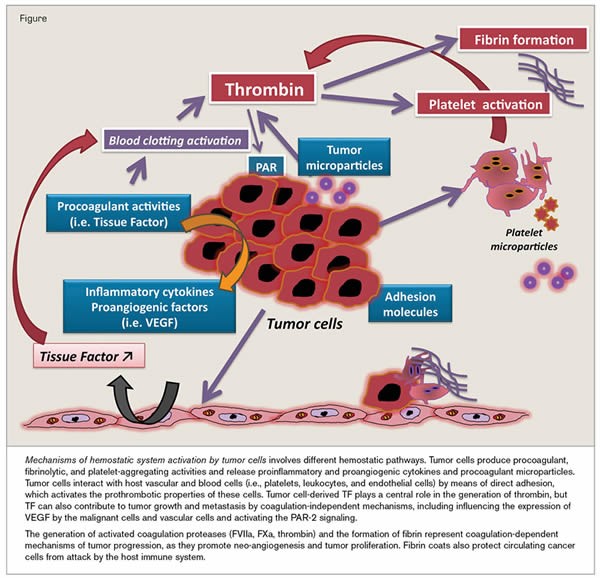 The precise mechanism starts with the tumor’s ability to cause prothrombogenic proteins to exit the vasculature and enter the tumor microenvironment. This is done predominantly through increased permeability of blood vessels via VEGF production.

The blood coagulation cascade is initiated upon the binding of FVIIa (activated factor VII), a plasma protein, to TF, a 47-kDa transmembrane protein that is constitutively expressed on the surface of subendothelial cells and some extravascular tissues. This binding leads to the proteolytic activation of various coagulation zymogens, such as FX, FIX and prothrombin, resulting in the formation of a fibrin clot. Interestingly, TF expression is up-regulated on the surface of transformed cells, which has long been implicated in the in vitro procoagulant activity and cell aggressiveness of different tumour cell lines. Moreover, TF was shown to be overexpressed in samples from patients with various neoplasias, including most carcinomas and other tumours such as melanoma.

TF overexpression in malignant tumour cells seems to be directly related to oncogenic events such as the presence of the mutant oncogenes K-ras, EGFRvIII (epidermal growth factor receptor variant III) and HER-2 (human epidermal growth factor receptor 2), as well as the loss of the tumour suppressor genes p53 and PTEN (phosphatase and tensin homologue). Furthermore, Zhang et al. showed that the selective up-regulation of TF in highly invasive MDA-MB-231 human breast cancer cells, compared with that in less invasive MCF-7 cells, also appears to be regulated by miRNA-19 (microRNA-19).

Tumour cells exhibit higher levels of the phospholipid PS on their membrane outer surface (compared with normal cells), supporting the assembly of blood coagulation complexes that depend on negatively charged membranes. Thus, by exposing TF and PS on their outer membrane, tumour cells can function as binding surfaces for different proteins of the coagulation cascade (i.e., factors VIIa, VIIIa, IXa, Xa and Va) and promote the subsequent assembly of the prothrombinase and tenase complexes, leading to the generation of fibrin in the extravascular environment. TF expression by tumour cells allows for the formation of the extrinsic tenase complex; establishment of the intrinsic tenase and prothrombinase complexes on the surface of various tumour cell lines has also been described, mainly associated with PS exposure. Remarkably, data obtained with cell lines are consistent with results from immuno-affinity ligand-binding studies that have demonstrated the presence of FXa (activated FX) and thrombin in human patient tissues. 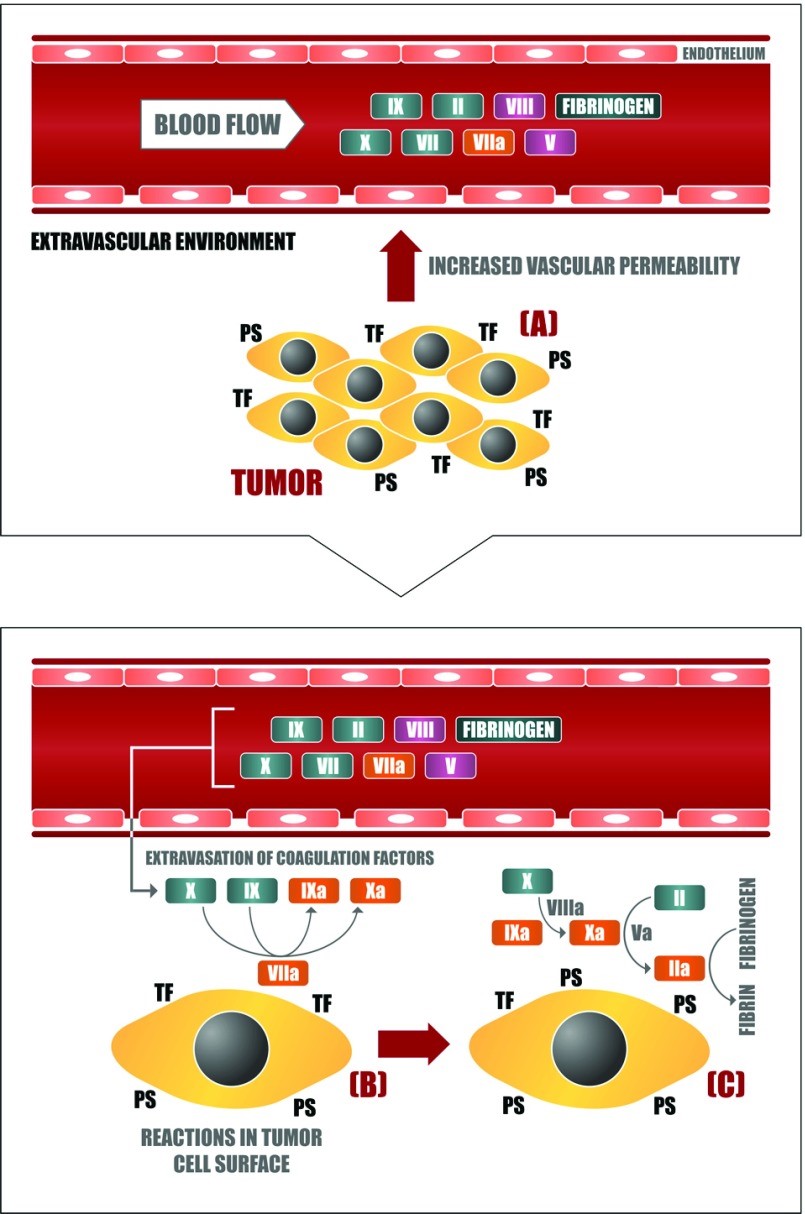 – (A) Neoplastic cells stimulate vascular permeability in the tumour microenvironment through the generation of proangiogenic factors such as VEGF. In this way, blood coagulation proteins can leave the plasma circulation and reach the extravascular tumour microenvironment, getting in contact with the plasma membrane of tumour cells, which is rich in procoagulant molecules such as (B) TF and (C) PS. The assembly of different blood coagulation complexes thus culminates in the local generation of thrombin and fibrin. http://www.ncbi.nlm.nih.gov/pmc/articles/PMC3763425/

How is hypercoagulability managed in cancer patients?

Recommendations of the American Society of Clinical Oncology VTE (venous thromboembolism) Guideline Panel include (1) all hospitalized cancer patients should be considered for VTE prophylaxis with anticoagulants in the absence of bleeding or other contraindications; (2) routine prophylaxis of ambulatory cancer patients with anticoagulation is not recommended, with the exception of patients receiving thalidomide or lenalidomide; (3) patients undergoing major surgery for malignant disease should be considered for pharmacologic thromboprophylaxis; (4) low molecular weight heparin represents the preferred agent for both the initial and continuing treatment of cancer patients with established VTE; and (5) the impact of anticoagulants on cancer patient survival requires additional study and cannot be recommended at present.

What is Heparin and how does it work to prevent hypercoagulation?

Heparin is a heterogenous mucopolysaccharide. It mainly acts on the interaction of antithrombin and thrombin (factor lla). This drug inhibits the thrombin induced platelet aggregation. Heparin silmentaneously binds to thrombin and antithrombin. Heparin – Antithrombin complex also inhibits fator xa and xia and other factors which are part of intrinsic coagulation pathway. This drug mainly binds to proteins, macrophages as well as endothelial cells. 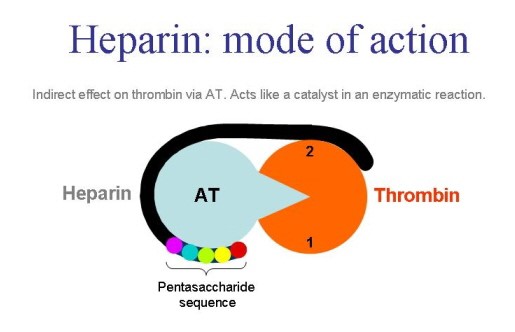 a Heparin modulates blood coagulation through inhibition of the serine-protease factors XIIa, XIa, Xa, IXa and IIa (thrombin), either directly, or through potentiation of the plasma serine-protease inhibitor antithrombin. Heparin also inhibits platelet activation, an effect that is, in part, secondary to it binding to thrombin, a potent platelet-activating substance. b A considerable percentage of patients receiving heparin therapy go on to develop the serious adverse reaction of heparin-induced thrombocytopaenia (HIT) type 2. This arises when antibodies are raised against a complex of heparin and platelet factor 4 (PF4). Subsequent binding of platelet-surface PF4 by heparin results in immune-mediated platelet activation and possible thrombosis. Therefore, heparin chains with insufficient length to bind PF4 are considered to be less immunogenic. V, factor V; VIII, factor VIII; vWF, von Willebrand factor. http://www.nature.com/nrd/journal/v1/n2/fig_tab/nrd724_F2.html

The incidence of heparin induced thrombocytopenia (HIT) is greater for unfractionated heparin (UFH) than low molecular weight heparin (LMWH). The risk of developing HIT is in part due to the molecular weight of the heparin.  As such, this is one reason why LWMH cause less HIT than UFH.