Antigen Presenting Cells (APc’s – dendritic cells, monocytes, and macrophages) are the key to provoking a robust adaptive immune response. But are all APC’s created equally in this regard? Not exactly.

Dendritic cells are considered professional APC’s, and macrophages are also recognized as being important in this regard because of their role in innate immunity through Toll Like Receptor functioning. However, some macrophages do it better than others. It turns out that macrophages deep in lymph nodes are much better than circulating and tissue macrophages at presenting antigens to T-helper cells, and subsequently activating robust cytotoxic T-cell responses and humoral responses. 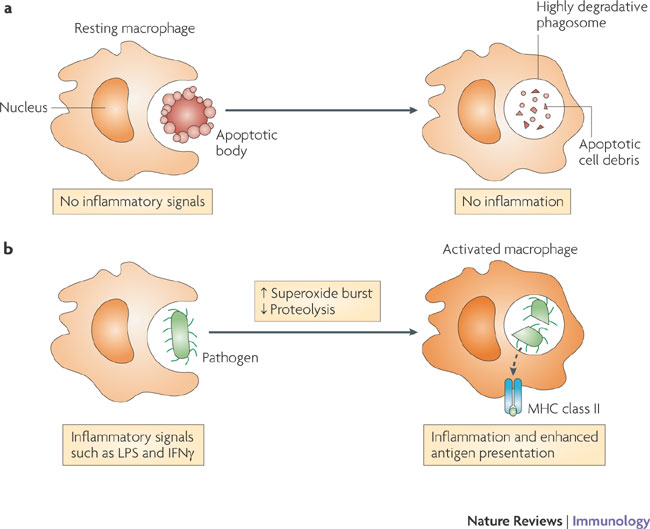 The functions carried out by macrophages are modulated by their degree of stimulation by exogenous mediators, such as microorganism-derived Toll-like receptor (TLR) agonists, or endogenous activators, including cytokines and chemokines. a | Resting macrophages function in the absence of any inflammatory stimuli and their primary role is to remove cellular debris such as apoptotic cells from the body. The phagosomal compartment of the resting macrophage is highly degradative for efficient processing of this material. b | By contrast, macrophages activated by exposure to TLR agonists, such as lipopolysaccharide (LPS), or cytokines, such as interferon-gamma (IFNgamma), show alterations in several aspects of phagosome physiology. The superoxide burst is enhanced (also see the figure in BOX 1); microbial killing in activated macrophages relies more heavily on the production of reactive oxygen and nitrogen intermediates. In addition, the phagolysosomal milieu of activated macrophages is actually less proteolytically active than that of resting macrophages. This level of proteolysis is similar to that observed in dendritic cells, therefore, the implication is that this switch may enhance the half-life of epitopes and thereby maximize the antigen sampling and presenting capacity of activated macrophages.

So, how can we deliver vaccines into the medullary centers of the lymph nodes? The answer is an immunologically stealth nanogel.

The researchers injected the nanoparticles into mice. They found that the particles, which have no electric charge or surface molecules that would attract the attention of circulating immune cells, were able to enter the mice’s lymph nodes. But once inside the lymph nodes’ core, the special kind of macrophage engulfed the particles. When molecules for signaling killer T cells were put inside the nanoparticles, they hindered tumor growth far better than existing vaccines.

Because existing therapeutic cancer vaccines provide only a limited clinical benefit, a different vaccination strategy is necessary to improve vaccine efficacy. We developed a nanoparticulate cancer vaccine by encapsulating a synthetic long peptide antigen within an immunologically inert nanoparticulate hydrogel (nanogel) of cholesteryl pullulan (CHP). After subcutaneous injection to mice, the nanogel-based vaccine was efficiently transported to the draining lymph node, and was preferentially engulfed by medullary macrophages but was not sensed by other macrophages and dendritic cells (so-called “immunologically stealth mode”). Although the function of medullary macrophages in T cell immunity has been unexplored so far, these macrophages effectively cross-primed the vaccine-specific CD8+ T cells in the presence of a Toll-like receptor (TLR) agonist as an adjuvant. The nanogel-based vaccine significantly inhibited in vivo tumor growth in the prophylactic and therapeutic settings, compared to another vaccine formulation using a conventional delivery system, incomplete Freund’s adjuvant. We also revealed that lymph node macrophages were highly responsive to TLR stimulation, which may underlie the potency of the macrophage-oriented, nanogel-based vaccine. These results indicate that targeting medullary macrophages using the immunologically stealth nanoparticulate delivery system is an effective vaccine strategy.