Last week, pacritinib, an oral tyrosine kinase inhibitor drug-candidate with dual activity against JAK2 and FLT, has been granted Fast Track designation by the U.S. Food & Drug Administration for the treatment of intermediate and high risk myelofibrosis, including but not limited to patients with disease related thrombocytopenia, patients experiencing treatment emergent thrombocytopenia on other JAK2 therapy or patients who are intolerant to or whose symptoms are sub-optimally managed on other JAK2 therapy. (See article.)

The JAK family of enzymes is a central component in signal transduction pathways, which are critical to normal blood cell growth and development as well as inflammatory cytokine expression and immune responses.

The Jak–STAT pathway The Jak–STAT pathway depends upon the actions of Jak tyrosine kinases (for example, Jak1, Tyk2), which are attached noncovalently to a number of cytokine receptors, including those for interferons, erythropoietin (EPO), and thrombopoietin (TPO). Once a ligand has activated a receptor via dimerization, the Jaks transphosphorylate one another as well as the C-terminal tails of the receptors. The resulting phosphotyrosines attract STAT proteins, such as the STAT1 and STAT2 shown here (dark blue, dark green), which bind via their SH2 domains and become phosphorylated on specific phosphotyrosines, indicated here as Y’s (inset), by the Jaks. Thereafter, the STATs dimerize, each using its SH2 domain to bind to the phosphotyrosine of its partner, and then translocate to the nucleus, where they operate as transcription factors to activate expression of key genes, for example, the gene encoding an interferon. Not shown here is the activation under certain conditions of Jaks that are bound to some G-protein–coupled receptors (GPCRs) and the phosphorylation of STATs directly by certain ligand-activated growth factor receptors (RTKs) as well as non-receptor tyrosine kinases. Copyright 2014 from The Biology of Cancer, 2nd Ed. by Weinberg. Reproduced by permission of Garland Science/Taylor & Francis LLC.

The JAK-STAT pathway plays a central role in initiating signal transduction from the erythropoietin (Epo) receptor.  In most patients with polycythemia vera (PV)  the receptor is activated constitutively (i.e. all the time) due to lack of auto-inhibition of the JAK2 enzyme, because of  an activating mutation involving an Amino acid substitution of valine to phenylalanine (V617F) – see diagram 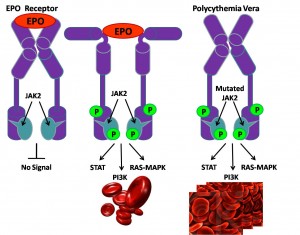 Activating mutations of JAK2 are implicated in certain blood-related cancers, including myeloproliferative neoplasms (MPNs), leukemia and certain solid tumors. (See Medscape – Role of JAK2 in the Pathogenesis and Therapy of Myeloproliferative Disorders.) 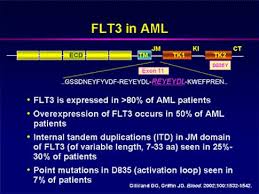 Mutations in the tyrosine kinase, whether in BCR-ABL in CML or a FLT3 mutation in AML, bypass control that comes from ligand binding. Rather spontaneous dimerization and constitutive intracellular signaling promotes growth.

Pacritinib has demonstrated encouraging results in Phase 1 and 2 studies for patients with myelofibrosis and may offer an advantage over other JAK inhibitors through effective treatment of symptoms while having less treatment-emergent thrombocytopenia and anemia than has been seen in currently approved and in-development JAK inhibitors, because these also suppress JAK1.

Classified as a myeloproliferative neoplasm (MPN), can arise on its own (primary myelofibrosis, PMF), or as a progression of polycythemia vera (post-PV-MF) or essential thrombocythemia (post-ET-MF). The manifestations of PMF, post-PV-MF and post-ET-MF are virtually identical and treatment is generally the same for all three. The disorders cause proliferation of blood progenitor cells in the bone marrow, which leads to marrow fibrosis and crowding, which results in reduced production of mature red blood cells, white cells, and platelets. (See MPN Research Foundation.) On August 8, 2014, the Princess Margaret Cancer Center in Toronto received a $2.4 MM grant from a patient who died of MPN in June, with which a Myeloproliferative Neoplasm Program will be established.

Signs and Symptoms of myelofibrosis

Many symptoms of MF are caused by insufficient numbers of normal blood cells or chronic inflammation. Symptoms may include the following:

Some patients with myelofibrosis may have no symptoms, particularly early in the course of the disease.

The discovery of JAK2 mutations in MF, PV and ET in 2005 has provided a long-sought opportunity to develop more effective, targeted therapies for MPNs. A targeted therapy is one that is designed to be more specific for abnormal cells. In 2011, after years of development and clinical trials, Jakafi (also known as ruloxitinib) became the first FDA-approved drug for treating MF patients. Jakafi is taken orally and inhibits the activity of JAK2 and the related protein JAK1. In clinical trials, Jakafi reduced spleen size, abdominal discomfort, early satiety, bone pain, night sweats and itching in MF patients. Jakafi also reduced the level of “pro-inflammatory cytokines” in the blood, which cause the symptoms of chronic inflammation. The allelic burden of JAK2 V617F (a measure of the number of abnormal cells present) was not significantly reduced and Jakafi does not appear to be a cure for MF. So far, the impact of Jakafi on survival has not been fully established.

Importantly, Jakafi is effective in treating MF patients regardless of whether they harbor a JAK2 mutation, apparently because the JAK1 and JAK2 pathways are important in MF even when there is no JAK2 mutation present. Jakafi inhibits both normal JAK1 and JAK2 and JAK2V617F.

Because Jakafi targets normal JAK1 and JAK2, as well as abnormal JAK2, it may interfere with normal blood cell production and common side effects include thrombocytopenia (reduced platelets) and anemia (reduced red blood cells).

1 thought on “JAK-inhibitors for myelofibrosis”