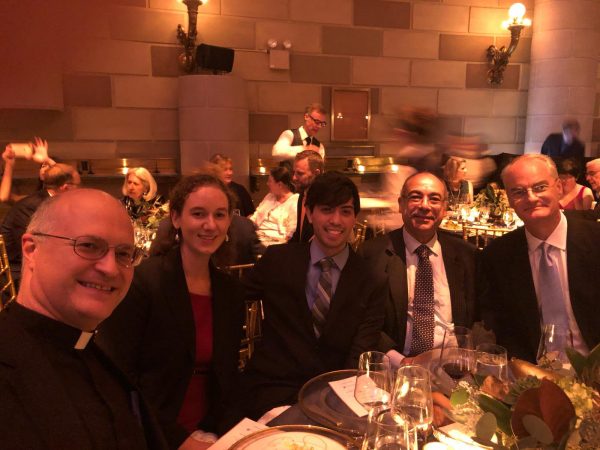 On October 10, 2018, the School of Diplomacy had the privileged to attend once again The 2018 Global Leadership Dinner at Gotham Hall, in New York City – USA. This year was a special occasion as it marks the 20th anniversary of its host, the United Nations Foundation, and for that reason, a special tribute was delivered to former UN Secretary-General and UN Foundation Board Member Kofi Annan.

The United Nations Foundation, since 1998, has become an indispensable partner of the United Nations (UN). The foundation mobilizes ideas, people, and resources to help the UN drive global progress through effective collective action. Such advancement could not be left unrecognized, and so these annual dinners have been held for over 20 years to honor those in the frontline of change and progress. As of today, the Global Leadership Dinner is widely acknowledged as a signature event for the UN community and its most cutting-edge partners. The highest levels of the diplomatic sector, business, government, media, and entertainment say present to recognize the role of individuals or institutions in their endeavors to promote the values of the United Nations across the globe. Together, the UN Foundation and the UN help tackle the world’s most pressing challenges.

Highlights from the evening included the remarks from Zoe Saldana, actress global ambassador for the UN Foundation Shot@life campaign. Saldana presented the Global Leadership Award to the Little by Little campaign, recognized for inspiring youth action on the Sustainable Development Goals (SDGs). Little by Little, is a first-of-its-kind initiative where creatives from the world’s six largest advertising holding companies come together to raise awareness and drive the UN’s sustainable development agenda among Generation Z, the largest in history. The idea is that by engaging the current generation of mission-driven young people, the campaign set out to prove that small acts carried out on a regular basis can have an impact far greater than the sum of its parts. As an example, the campaign launched in March a YouTube video, “How to Save the World in 6 Seconds,” and a series of six-second ads encouraging people to share their own small actions.

Catherine Samba-Panza, former and first female President of the Central African Republic, presented a second UN Foundation’s Global Leadership Award to the U.N. Peacekeepers. A critical department within the United Nations charged with helping countries to navigate the path from conflict to peace. Currently, there are over 40 missions over the world, such as the missions to Haiti, Mali, India, Pakistan, Yemen, Middle East, Central African Republic, and so on. Furthermore, over 100,000 peacekeepers are currently serving in hard conditions and sometimes giving their lives to achieve peace and a better world.

The evening concluded with a special tribute to former UN Secretary-General Kofi Annan, who was given the Champion for Global Change Award. “This year’s event was planned with Kofi Annan, he was supposed to be here tonight,” said Kathy Calvin, CEO and founder of the UN Foundation. However, with full of hope in her voice, UN Deputy Secretary-General Amina J. Mohammed, said “Kofi Anna would not want as to solely look to the past. He spent his life working for the future. And the best way to honor him today is to take up that torch that he passed- and not just talk about it, but act on it.”