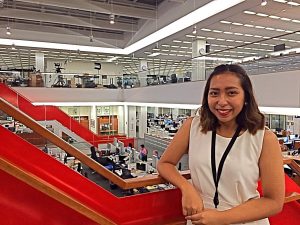 After Deadline – My Summer at The New York Times

I started my internship at The New York Times on the day of the Orlando attacks, the worst mass shooting in United States history.

Or maybe this thrilling summer began in May, when I spent a week at Temple University with 12 other lucky souls in what was, basically, editing boot camp – seven days that began with a wakeup call at 6 a.m. and ended after falling asleep on my books well past 1 a.m.

Let’s go even further and say the adventure started in December, two weeks before finals, when I got a phone call from a kindly old man who told me out of the blue that he would see me in Philadelphia. Confused, I asked, “Excuse me, what is this for?” And Professor Edward Trayes said, “Oh, The New York Times is looking to pay you $1000 a week to be an editing intern – does that sound good?”*

But this story really kicked off when I spent the entire month of October reviewing for the Dow Jones News Fund copy editing test – a tear-inducing, confidence-busting exam that around 1000 applicants subject themselves to every year, just for a shot at the world’s greatest bastion of journalism.
I thought I’d flunked the test, which made the call from Dr. Trayes all the more surprising. At that point, I would have been happy to be assigned to any desk at the Times, but Dr. Trayes thought I would be a good fit for the Foreign/National desk – or, paradise for an international relations major observing her first U.S. election.

Foreign/National was inundated by so much bad news this summer (multiple bombings, multiple shootings, multiple email scandals from the Democrats, multiple gaffes from Donald Trump) that one of the staff editors, a former Dow Jones intern, said, “Francesca, this is the no-joke desk. You should be proud of yourself for surviving this summer.”

A lot of things copy editors do are easier said than done – for example, writing a headline that is punchy and attention-grabbing and an accurate summary of the story while staying true to the lofty Timesian tone and fitting into the allotted layout perfectly is an art form.

The challenge for us interns was to make it on “After Deadline” – a weekly list on the Times’s internal blog that recognizes the past week’s best headlines. Only one out of nine ever made it (spoiler alert: it wasn’t me). Getting my first headline through to print had been hard enough, but it finally happened on a story about Hillary Clinton and Elizabeth Warren. My proudest achievement, though, was on the first night on the Democratic convention: I wrote the headline for a story about Michelle Obama’s relationship with Hillary Clinton, and for a few hours that night, it was the first hit on Google if you searched “Michelle Obama.”

There are many things that people don’t realize about newspapers. The locations you see at the top of the article? Those are called datelines, and they indicate that the reporter was actually on the ground. But that doesn’t mean real journalism is putting on a helmet and running around a war zone with a GoPro. Some budding news websites like to put reporters in the center of the story, producing content such as “Here’s What Happened When I Had Dinner with a Taliban Leader,” or something like that. The New York Times is the only legacy newspaper that still maintains an extensive international staff in bureaus throughout the world, and reporters are assigned to a region for extended periods, not just for one-day trips.

The highlight of my internship with the New York Times was when I met Azam Ahmed, the bureau chief formerly in Kabul and now in Mexico City. I was excited not only because he was a foreign correspondent, but also because he had written the article on Taliban justice that inspired my thesis. Talking to him made me want to be a foreign correspondent all the more. You could read every academic paper about Afghanistan, but an ivory tower academic will never be able to tell you about Afghanistan the way a journalist on the ground can.
Of course, it’s going to be a while before I’m anywhere close to being worthy of Azam’s credentials.

But this summer at The New York Times was an important stepping stone, and I am grateful to have experienced how a world-renowned newsroom with the highest standards works. Now it falls on me to build my street cred as a journalist and, hopefully, work my way back to the august institution on Eighth Avenue.
*I kid you not – this was how the conversation actually went. 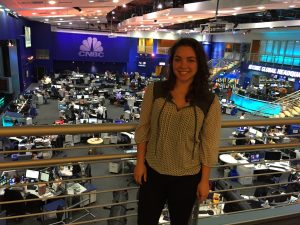 My name is Emily Balan, I will graduate in May 2016 with a degree in international relations and diplomacy, a degree in philosophy, and with minors in French and journalism. After exploring the non-profit sector last year for my first internship (I was the communications intern at the human rights advocacy NGO Human Rights First), I decided I wanted to explore the realm of the newsroom. In my last semester, I am a digital breaking news desk intern at CNBC, the financial news network.

At CNBC in Englewood Cliffs, N.J., I am treated as a news associate, which is like an entry-level job for a journalist. I attend the morning and afternoon briefings where all the departments and section editors brief the managing editor on what they’re working on for the day and other long term projects. I am mainly responsible for producing content for the website. This means grabbing wire stories that are relevant to our readers’ interests. It also means doing some reporting and writing up small stories to publish on the website.

I work closely with the digital team, helping with formatting, as well as with research for projects. I am working with my on-site internship supervisor and another editor, who handles most of the international stories, in order to produce my own story. I had visited the Czech Republic immediately before starting my internship, so I collaborated with these editors to pitch a story that I have been researching in my spare time at CNBC.

I have been able to develop close working relationships with my fellow interns as well as news associates since we are all working in an open air space. The news room, without the myriad blocks of desks and cool lighting with a studio built in, could look like a large warehouse in terms of open space and lack of architectural design. The open air, however, makes it more conducive for editors to communicate quickly and directly when breaking news comes in.

The newsroom can definitely be an exciting, albeit intimidating, place. On my second day, the Fed made a major decision and I jumped right in to feed quotes from an on-air guest to the editor writing up the story for the website. On most days, I merely bear witness to the excitement since intern-liability is too great for a network whose majority viewership is in the financial sector. I find that I am learning how to keep up with such a fast-paced environment, as well as instilling the journalistic values of accuracy and timeliness.

I am learning more than I ever thought I would know about the financial world, both in the United States and around the world. I am thankful that I saved the two classes – International Political Economy and Economic Aspects of the International System – for my last semester because they were a great starting point that gave me a framework to think about the global financial news. Right now, the big story is on oil: it is the main export of many fiscally powerful countries (think OPEC) and the low prices impact international relations. There have been several meetings of world powers to coordinate efforts to stabilize the global economy in light of a strengthening dollar combined with low oil prices.

The most challenging aspect of the job, however, is precisely that I do not know the business behind these stories. I am not familiar with how the stock market works, although I study for pop quizzes on current topics from the managing editor during our twice-daily briefings. It is also challenging to be in such a tense environment where anything could happen at any time. I find myself intimidated by these busy and important people, whose work affects so many others. I found that I have to purposefully instill myself with the confidence necessary to talk about my projects and pitch stories on a weekly basis.

There is some respite in the chaos of the newsroom. Since I am more available than some of the other interns, I work for the commentary section, mainly copy editing articles and contemplating them (adding links and writing headlines and descriptions) to be published at the peak of their news timeliness. This is a more laid back environment, separated from the constant stream of news from before the market opens to after the closing bell.

I would definitely recommend this internship. My supervisors and everyone involved in the internship process have been more than welcoming and accommodating. I would say, however, to make sure that you have a thick skin and that you have an interest in the financial aspect of things, even if it is just to learn more about the subject. It is tough to report on a subject you know very little about, but the learning experience and the newsroom environment is more than enough to make up for the intimidating pressure.