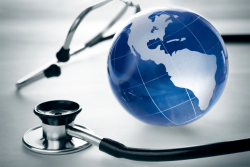 The Ebola outbreak puts in clear focus central questions for the global health system: Who is responsible for getting the outbreak under control? What can and should be done by the governments of Guinea, Sierra Leone and Liberia, and by international actors? When health systems are weak or overwhelmed, who can and should step in to provide support? What should be the role of public actors such as the WHO, or well-resourced governments, such as the United States or European Union, versus private organizations like MSF or the pharmaceutical industry? Who can and should coordinate the international response? As yet another health crisis reveals the cracks in the global health system, Professor Larry Gostin’s new book Global Health Law (Cambridge, MA: Harvard University Press, 2014) could not come at a more appropriate time. The book provides essential understanding of the system of international laws that has been constructed to address threats to public health security, such as an international Ebola outbreak, including historically-informed, accessible explanations of legal norms. It will also help readers think critically through some of the difficult questions raised above regarding roles, responsibilities and rights in an era of increasing health interdependence.