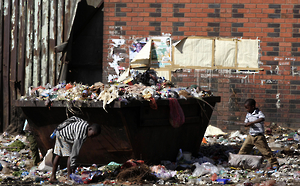 By Jane Cohen and Amanda Klasing

If you are reading this, it’s not likely you will be one of the 2.5 billion people looking for a place to defecate outdoors. Or one of the hundreds of millions of mostly women and children walking great distances, or waiting in long lines, to collect one or two buckets of water – water that may not even be safe to drink. By the time the sun sets on World Water Day this Saturday, more than 1,800 children will have died from preventable, treatable diarrhea, largely linked to lack of clean water and sanitary conditions.

In 2010, 121 countries acknowledged the fundamental role that water and sanitation play in people’s lives, and voted at the United Nations General Assembly to recognize a free standing right to water and sanitation. Despite this important step, the situation in many countries remains dire. In Zimbabwe, Human Rights Watch documented people drinking dirty water from shallow unprotected wells, waiting in line for hours at contaminated boreholes, defecating openly in urban settings, and living in neighborhoods surrounded by the flow of raw sewage. Although Zimbabwe’s government recognizes the right to water both internationally and in its own constitution, dangerous policies, such as cutting off people’s access to municipal water for lack of payment, still persist.

In Bangladesh, Human Rights Watch documented the health effects of many decades of untreated effluent released from unregulated leather tanneries operating in the very heart of the country’s capital, Dhaka.  While Bangladesh voted to recognize the right to water and sanitation at the General Assembly, the country’s Supreme Court had already ruled the tannery pollution toxic and ordered the government and tannery associations to relocate the tanneries out of the city and treat their industrial waste. Although the Supreme Court issued the order over a decade ago, the urban tanneries are still in full operation, spewing toxins into the local community’s water source.

When governments fail to deliver on the rights to water and sanitation, the suffering disproportionately falls on women and girls. From girls missing school because they are collecting water, to women giving birth in unhygienic conditions, to bathing and relieving themselves in open public spaces, lack of access to water directly affects their health, their education, and increases their risk of violence and death.