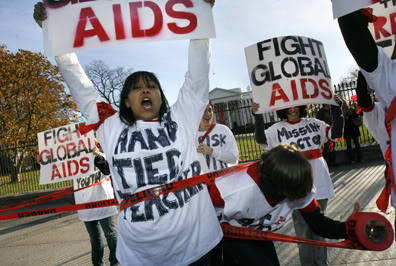 On November 8th, U.S. Secretary of State Hillary Clinton, made a remarkable announcement. She called for an AIDS-free generation and threw the weight of the Obama administration behind a set of ambitious goals, including eliminating new HIV infections among children by 2015, scaling up HIV treatment and eliminating stigma and gender-based violence.

Why remarkable? Ten years ago, as the international community debated how to respond to Kofi Annan’s call for a multilateral funding body for global health, skeptics questioned whether new money for AIDS treatment would be wasted. Africa, so the narrative went, didn’t have the wherewithal to deliver medicines, Africans would not be able to adhere to strict treatment regimens, moreover who would pay the sky high prices of therapy?

Ten years on, with more than 6.6 million people on life-saving HIV treatment in low- and middle-income countries, the majority of whom are Africans, skeptics have been forced to reassess their pessimism. The AIDS response is now viewed as one of the greatest success stories of global health. Since 2001, HIV incidence has fallen in 33 countries, 22 of them in sub-Saharan Africa.  HIV prevalence dropped dramatically among young people– largely owing to changes in sexual behavior. Science suggests that the prospects are even brighter. A recent trial revealed that treatment can reduce the risk of transmitting HIV to sexual partners by 96%.

How did it all come about and what does global governance have to do with it?

Writing in this journal last year, Michel Sidibé, Executive Director of UNAIDS, outlined the many ways in which the AIDS movement pushed for novel governance approaches.

In the early days, the Western gay rights movement focused attention on AIDS, but it was soon joined by people living with HIV in all corners of the world. Other groups of people at higher risk of HIV – including sex workers and people who inject drugs, as well as the women’s movement – rallied around the cause.

Activists engaged in strategic campaigning, civil disobedience, direct action and litigation. The result? Clinical trials and drug registration were fast-tracked; international trade rules were clarified which brought about massive decreases in the cost of drugs; big Pharma came under fire to offer tiered pricing. The transnational AIDS movement was politically astute and generated incentives for decision-makers to take action in a way that they hadn’t for other global health inequities.

The movement pressed for a shift in discourse on the social, political and economic determinants of risk and vulnerability to disease and the need to address harmful social norms. Perhaps most importantly, people living with and affected by HIV demanded that their preferences and expertise be taken into account in the planning and delivery of services – making services more responsive and keeping policymakers on their toes.

At the global level, the movement formed broad-based alliances with state and non-state actors orchestrating to put HIV on the agendas of the UN Security Council and a UN General Assembly Special Session – two firsts for a health issue. The slogan of ‘Health for All’ was translated into a political commitment to universal access to HIV services. Country by country progress, recorded through a unique reporting system, is reviewed annually in the General Assembly, establishing a virtuous circle of visibility, financing, accountability and results.

Despite these successes, challenges remain. 34 million people were living with HIV in 2010. Two people are newly infected with HIV for every person that commences treatment, and the global costs of treatment are not sustainable. One hundred and six countries report laws or regulations that present obstacles to access to HIV services for vulnerable populations.

Moreover, for the first time, international investments in AIDS diminished in 2010. Last week, the Global Fund Board took the widely criticized decision to postpone the next round of grants—meaning that there will be no fresh funds until at least 2014. Given the ambitious targets for 2015 set at the recent UN General Assembly High Level Meeting the prospects of success could not appear more remote.

Yet the AIDS response is no stranger to adversity. Calling for an AIDS-free generation may seem optimistic, but it is within our grasp, as are reaching other internationally agreed targets on HIV and global health. What is now required is the right mix of focused investments, strategies, political incentives and – crucially – continued innovation in the governance of the response to 2015 and well into the post-2015 development era.

Likely, progress will depend on linking a revitalized AIDS movement to movements for social justice and sustainable development. Previous success was in part a function of leadership which emerged from all sectors which forged all manner of coalitions and coalesced around very concrete policy goals (e.g., TRIPS flexibilities, universal access). What might be the policy goals to bring together the combined power and innovation of the global health community? One option, where the AIDS response has been a leader, in the midst of largely ineffective and inadequate global governance, is the push to reduce countries’ dependency on foreign-made and -financed drugs. The Global Fund crisis is a stunning reminder that lives in the Global South are held hostage to fickle donors, distant bureaucrats, and unpredictable investors.

I have my own ideas on what further enhancements in the governance of the response would look like. But I am writing this blog to canvas the views of the global health governance community on how to leverage the creativity that the AIDS community has brought to governance to improve the prospects for global health more widely.

The opinions expressed here are those of the author and do not necessarily reflect the policy of UNAIDS or the United Nations.