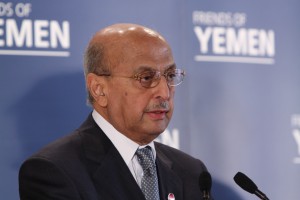 Dr. Abu Bakr Al-Qirbi is the Yemeni Foreign Minister. Born in 1942, Al-Qirbi was extensively educated in the United Kingdom and holds degrees from the universities of Edinburgh, Liverpool, and London. He worked as a doctor before returning to Yemen to become a professor at Sana’a University. He first entered the ministerial cabinet in 1993 and has held the position of Minister of Foreign Affairs since 2001. However, following the popular uprising in Yemen in 2011, former President Saleh fired his entire cabinet, requesting that they continue to serve in a caretaker function until a new government is formed. In addition, he is heavily involved in the issues of Human Rights and the emergence of Democracy.1

His Excellency provides us several examples of love and forgiveness in the Yemeni government. The first case is that of the 1990 unification of the North and South. Before the end of the war, amnesty was declared for those who carried arms for the separatists. The important thing about reconciliation in any community is that it has a predominant effect on attitudes. It tends to reduce the attitude of hatred and promotes forgiveness for the mistakes that people have made. In addition, reconciliation produces societal harmony because love always prevails over hatred. But in the case of Yemen there were many challenges. One of them was the extremists who considered forgiveness as a sign of weakness and not strength. The extremists used intimidation and threat to turn conflict that could have been resolved by negotiation into further violence. Fortunately, they did not prevail.

The second example occurred in early 2011, at the peak of the Yemeni political crisis, when the whole world was expecting Yemen to slip into a civil war. Political leaders from both sides could have abused their power but they chose not to as they realized that the conflict would mean bloodshed, destruction of the country, and loss of lives. The feeling of love for their citizens and country prevented Yemen from slipping into a civil war. It was a battle of personal interest and responsibility to protect. Dr. Al Qirbi said that the more people moved away from personal aspiration and fostered an attitude of reconciliation, forgiveness, and love for each other, the more they succeeded in saving their country from war. Dr. Al Qirbi played a significant role in Yemen’s current transitional phase and in the National Reconciliation Dialogue. He was instrumental in evaluating the scope for negotiation with extremist and rebel groups as well as the capabilities of the transitional government to overcome the country’s mounting issues. 2