The Africa Dialogue Series 2018-A New Vision for Africa and the 2063 Agenda. 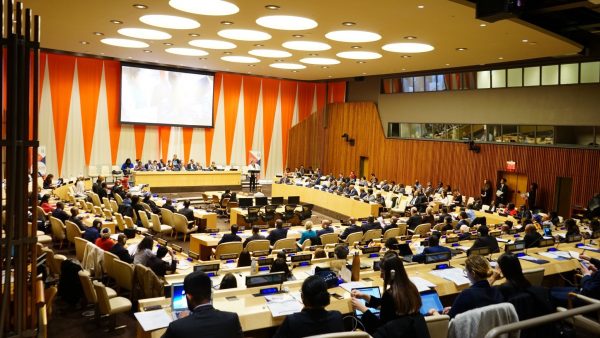 This article was written by Ted Mitchell Apondi. Ted is a freshman at the School of Diplomacy and International Relations at Seton Hall University. He is also a UN Digital Representative for the Center for United Nations and Global Governance studies and a Diplomacy Student Ambassador. Lastly, Ted is passionate about Peace and Sustainability and founded an online initiative called Humans of Peace. Contact : Ted.apondi@student.shu.edu LinkedIn: https://www.linkedin.com/in/ted-apondi-5861a0148/

In the midst of global economic developments, the Africa Dialogue Series (ADS) was held on the 17-18th of October at the United Nations Headquarters in New York. Organized by the Office of the Special Adviser on Africa (OSAA), the series replaces the “Africa Week” which was held in previous years and its purpose is to “provide a platform to explore and promote critical debates on operationalizing the peace, security, human rights, humanitarian and development nexus in Africa”.

The Dialogue Series also took place during the 15th anniversary of the establishment of the OSAA- a time, when both the United Nations and the African Union are undertaking significant reform process. So, the event will also set the tone for a new strategic direction for the Office with key stakeholders and partners in place. In addition to this historic moment, the ADS featured special tributes to two distinguished sons of Africa, former United Nations Secretary-General Kofi Annan and President Nelson Mandela, whose work for development, peace, security, reconciliation, human rights and post-conflict recovery and reconstruction in Africa have been significant in shaping the future of the continent.

A great point to note from this series was that, it was structured to be highly interactive and inclusive of a wide range of participants. From Member States, to high-level representatives from African Regional and Sub-regional Organizations, the United Nations System, as well as the Private Sector, Civil Society, Academia, Think tanks, the Diaspora and other key stakeholders. The series was split into two days with the third day featuring a debate in the General Assembly. Representing the Center for UN and Global Governance studies, I was able to cover the first two days of the dialogue.

Some of the Key Speakers from the opening session were UN Secretary-General Mr. Antonio Guterres, President of the United Nations General Assembly Ms. Maria Fernanda Espinosa Garces, Chairperson of the African Union Commission Mr. Moussa Faki Mahamat, Permanent Representative of Bolivia to the United Nations Mr. Sacha Sergio Llorentty Soliz and President of the United Nations Economic and Social Council. Apart from their tributes to the great leaders Kofi Annan and Nelson Mandela, a key theme in their speeches was the need to foster cooperation among states, civil society and other stakeholders for the greater sustainable development, peace and security and growth of the African region.

There 5 key talking points from the series were:

Some of the most notable remarks from top leaders were as follows:

In addressing the need for all Africa states to be present and active in their own development, Former UN adviser on Africa, Prof. Ibrahim Gambari, said, “You cannot shave a man’s head in his absence, All the Africa Union states must pull together to practicalize this nexus of peace and security in the Sahel Region.”

Director of the Division For Inclusive Social Development, Ms. Daniela Mas, UN Department of Economic and Social Affairs said, “It’s the lack of opportunity, not resources, the lack of access to opportunity in Africa that we need to address. We need to not only develop but implement strong policies for the young African people”.

President of the Economic and Social Council Inga Rhonda King, “There can be no sustainable development without peace”, “Now more than ever we need stronger partnerships for peace to help countries that are further behind to advance their development.”

In essence, the Africa dialogue served as gateway into a new kind of discussion for Africa, one that is fruitful and promising for the continent. After the conference it was great to see delegates and fellow NGO representatives exchange contacts and begin to discuss ideas and projects based on some of the speeches they heard.

To see live recordings of the Speeches and discussion given at the Africa Dialogue Series please visit : http://webtv.un.org/watch/player/5850495016001