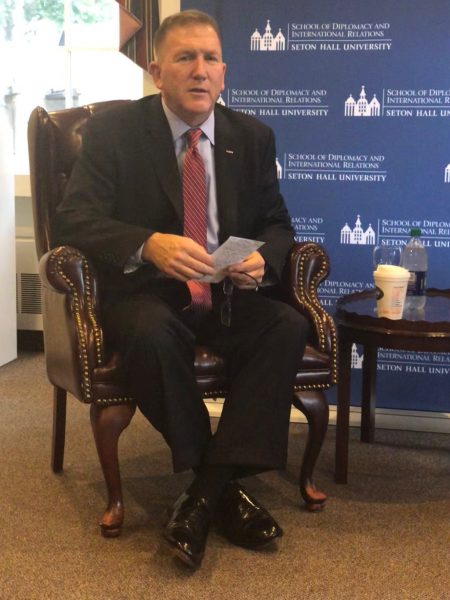 In October, Alan Metzler visited the School of Diplomacy and International Relations to talk to the Diplomacy students about his long career serving the country. Mohamad Mirghahari, an aluminum of Master’s in Communication of 2004 and the first Abd el-Kader Fellow was the moderator of Mr. Metzler’s talk.

Mr. Metzler started his career over 30 years ago, working in the Department of Homeland Security and the U.S. Air Force. He shared some stories with the students. When Mr. Metzler was serving as the Chief of Staff at the Transportation Security Administration (TSA), he reached out to the White House personnel when he needed some good talent. That is how he met Mr. Mirghahari, who was a Presidential appointee under the Obama Administration to serve as a Senior Advisor at the TSA.

In 1984, Metzler was an undergraduate with a double major in Political Science and Pre-Law. In the same year, he attended a debate about Cold War in Washington D.C. It was a changing point in his life, young Metzler was very idealistic and wanted to change the world. After the debate, he realized he wanted to be someone that worked in the environment, making a difference, being part of the history as a change maker. When Metzler graduated from the University of California, Santa Barbara in 1985 he decided he would join the U.S. Air Force.

Metzler said you can serve your country in more than a thousand different ways. Throughout his career, he has had many opportunities, he joked he has had a millionaire life experience. You do not become rich by serving your country; however, your life will be enriched and unique. This is the benefit of serving your country. Metzler served the U.S. for 31 years.

Metzler wanted to share with the audience stories about instruments of power and the importance of diplomacy through his interactions along the way. In his first assignment, Metzler was sent to North Dakota to serve at an intercontinental ballistic missile base. At the time, the Cold War and issues of balance of power between the U.S. and the U.S.S.R were hot topics. Thus, visiting the ballistic missile base was a matter of national security. On one occasion, Metzler became a virtual nuclear power for one day. He was on his first convoy transporting a warhead when the van caught fire. The convoy had to stop, and Metzler declared a national defense area, which became federal property. He was happy he did not burn up as a so-called nuclear power.

In the 1990s, the U.S. went to war to rescue Kuwait and, for some of the Air Force, they are still there. He remembered the 1993 World Trade Center bombing, the Oklahoma City bombing in 1996 and the September 11 attacks which led to the war on terrorism. Those were transformative times for all of us. Metzler was the Chief of Security at a fighter base in North Carolina on 9/11/2001. After that, he moved to Washington D.C. to fight against terrorism for six years. There, he worked in the E-Ring in the Pentagon, then to the White House for the National Security Council. In the White House, Metzler’s job was to support the President’s ability to negotiate a strategic framework agreement with the Iraqi Government. In 2008, the U.S. was trying to turn sovereignty back to the Iraqi government. The following year, Metzler was deployed to Iraq where he had the opportunity to implement the agreement he previously supported.

Metzler opened the floor for all kinds of questions. Then, he concluded by saying that we all have a set of core values ​​that allow us to make decisions. Whenever something is odd, we can easily identify it and stop it. To top it off, Metzler had the pleasure to serve Presidents Obama and Trump and he said it was a privilege working for both.

This article was written by Patricia Zanini Graca, a second-year graduate student at Seton Hall’s School of Diplomacy and International Relations. Patricia is the Executive Editor at the Journal of Diplomacy, a UN Digital Representative at the Center for UN and Global Governance Studies, an Abd El-Kader Student Fellow and the Director of International Affairs at the Graduate Diplomacy Council. She specializes in International Organizations and Global Negotiations & Conflict Management. Her interests are human rights, gender equality and corporate social responsibility.