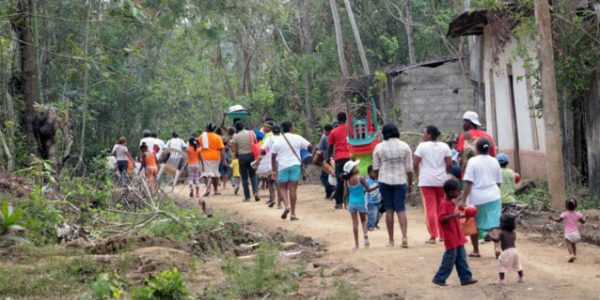 After nearly five decades of violent conflict caused by the guerrilla and paramilitary organizations, the rural population in Colombia has strongly been affected by the atrocities committed by these groups. Today, Colombia has 7.7 million Internally Displaced Person (IDPs), according to UNHCR. Syria, the second country on the list, has an internally displaced population of 6.2 million. According to the NGO Human Rights Watch, over 48,000 were displaced between January and November 2017.  Therefore, the Colombian IDPs require supplementary mechanisms that help them to survive in urban areas and the national government should employ additional policies to reduce their economic challenges.

To increase job opportunities for IDPs, the negotiation team should add an institution to the Fifth Point of the Peace Agreement with the Revolutionary Armed Forces of Colombia (FARC) to facilitate IDPs employment opportunities in the public and private sectors.  Second, The Ministry of Education should be able to provide auxiliary educational opportunities for children and women-IDPs by creating a special fund for tertiary education scholarships.  Third, a national budget would be ideal to provide income for IDPs economical self-subsistence so they can have enough resources to meet their basic human needs such as food and housing.

Improving the welfare of the IDPs in Colombia is fundamental for reinforcing internal safety issues at the cities mainly caused by unemployment. Most of the IDPs face poverty conditions due to their lack of urban acculturation, and because their agricultural skills are nor highly required in the major cities where they seek new opportunities.  UNHCR reported that Afro-Colombian communities and indigenous people have been particularly affected by the violence, which is endangering their survival. These two ethnic groups account for 10% and 3% respectively of the 7.4 million internally displaced persons (IDPs) in Colombia. Since the signing of the peace agreement, increased violence by new armed groups has resulted in killings, forced recruitment — including of children — gender-based violence and limited access to education, water, and sanitation, as well as movement restrictions and forced displacement of the civilian population. It is necessary to address the IDPs’ issues since their challenges represent negative effects for the economy of Colombia on the short and long term.

The Colombian IDPs are those who were expelled from their homes at rural zones, most were also victims of crimes such as torture, extortion, sexual violence and forced displacement to urban areas. These occurrences also with negative effects of programs to eradicate illicit crops, have caused poverty conditions for this population and have reduced their chances to generate an income.

The new government and the international community need to put in practice the strategies that the Colombian government has elaborated to deal with the high number of IDPs such as the 1997 “Unidad para las Victimas” Law.  An important progress has also been made with the First point of the Peace Agreement reached with The FARC which is the Rural and Integral Reform that will help the IDPs to recover the properties they lost during the conflict; however, there are still more mechanisms that should be considered to decrease the number of IDPs in the country and to improve their basic needs.

The six points of the peace agreement with the FARC are a successful step for Colombia’s post-conflict era. Nevertheless, it is recommended to carry out increased approaches to the First point of the accord, since the victims need further aids related employment, educational and humanitarian opportunities.

It is important to consult with the peace negotiation team of the government to propose the potential addition of institutions that guide IDPs in search of employment. However, this strategy could modify the terms of what has already been negotiated, and the priority of the national government is to preserve the current agreement. Second, to expand academic opportunities for IDPs, a formal proposal should be elaborated including the estimates of the potential scholarships that the government can provide. Although, the Ministry of Education could be facing challenges to provide an additional budget for this targeted population. Third, the creation of a new budget for the economic self-subsistence for IDPs is an ambitious strategy that needs to be addressed by the National Plan at every presidential term.

To implement these recommendations that address IDPs’ employment, education and economic challenges, the negotiation team should add an institution to the Fifth Point of the Peace Agreement to provide employment for IDPs to strengthen their social abilities and their trust in the society and public institutions. The Ministry of Education should consider expanding the students’ capacities at local elementary and middle schools. Moreover, a special fund of tertiary education scholarships should be created to adopt educational opportunities for children and women-IDPs which are the most affected displaced population. Finally, financial aid should be provided by a new budget that considers income generation for IDPs self-subsistence. The allocation of a national budget is needed to provide resources for IDPs’ food and housing needs.

If the previous targets are addressed by the government, then Colombia could make substantial progress to reduce unemployment rates, and it would prevent further perpetration of the cycle of poverty.  Also, by increasing education opportunities for children and woman, it will reduce their participation in different illicit activities at the urban areas, and their autonomous economic subsistence will contribute to diminishing their unfavorable humanitarian conditions in the cities.

Paola Ordoñez Eraso, an alumna of Seton Hall School of Diplomacy and International Relations, was responsible for collecting data and research for this blog. The time frame was between March and April 2017, resulting in a policy memo written by Ordoñez in April of 2017. This blog post was updated and written by Patricia Zanini Graca. Patricia is a second-year graduate student at Seton Hall’s School of Diplomacy and International Relations. Patricia graduated in Business Administration, and she holds an MBA in Business and Marketing. Patricia is the Executive Editor at the Journal of Diplomacy, a UN Digital Representative at the Center for UN and Global Governance Studies, an Abd El-Kader Fellow and the Director of International Affairs at the Graduate Diplomacy Council. She specializes in International Organizations and Global Negotiations & Conflict Management.