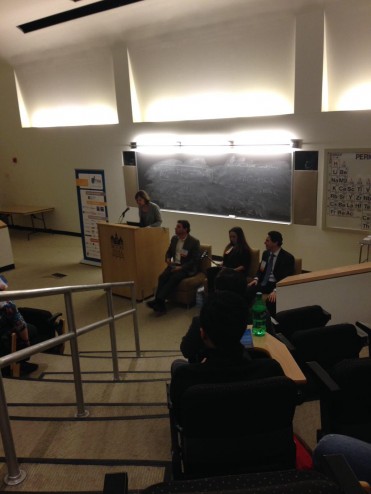 The event kick-started with an exciting open forum on building professional brands particularly on LinkedIn. Panelists stressed the importance of online networking with employers since it displays interest and leaves an impression. Dr. Ladik compared an individual who does not do research prior to an interview to a blank slate. He stated, “If you’re a blank slate, you’ll be a blank slate during the interview and might not be remembered.” This statement emphasized the importance of networking on social media with employers: to be remembered and leave a lasting impression. In fact, according to Ms. Cirelli, “Reaching out to someone is an invitation back to your personal brand.” In other words, creating a discussion on LinkedIn or even joining a LinkedIn organization/company group is a contribution to that individual’s brand.

Although panelists encouraged frequent posting on LinkedIn and other platforms, they stressed the importance of recognizing which content is appropriate and which is not. Dr. Rocca suggested students should “Imagine that their post will appear on the cover of the New York Times.” According to Dr. Rocca, if you would not want your post to be on the cover of a magazine, then you should not post it. This transitioned into an enlightening discussion on what kind of content should be posted. Panelists suggested posting dialogue that ignites conversation, proposing questions, and donating opinions on events/issues.

Panelists concluded the discussion by reminding students to maintain fresh and consistent platforms. One of Dr. Ladik’s “nuggets” was to “stay on the cutting edge by listening to podcasts.” Podcasts are an entertaining way to become informed about social media concepts, like Meerkat and many other exciting realms. Ms. Cirelli suggested to “have an elaborate social strategy.” Although this might seem difficult to do, panelists proposed many useful social media managing sites, such as HootSuite, for assistance.

A final major highlight on the panel discussion was the presentation of the NJTMA/George Mehm Scholarship to our very own Brian Mitchell, Class of 2016. Congratulations Brian!