Trump’s Plan B with North Korea: Already in the Bag

What if talks with North Korea don’t start as planned?  What’s the United States’ fallback?  Surprisingly, a Plan B of merely “getting to know you” has much to offer, mostly because it’s already in the bag.

Even if the summit were just a photo op, the United States is already achieving a great deal.  It is in a strong position either way.

Trump has gone long on this gamble – while also shorting it. He’s flying to Singapore – yet willing to walk away.  And he can do so because, as a good dealmaker, he has created a “take it or leave it” scenario.  It’s an existential opportunity for Kim, but, either way, the United States can manage.

Trump is moving the geo-political market, a feat rarely done by one player on the world stage.  His cult of personality has gone global, whereby North Korean Kim Jong-un’s ultimately remains peninsular.

So, Trump has positioned himself in charge of making things happen for North Korea –  but only if he decides that Kim’s behavior merits it.

For all intents and purposes, the summit has already started.  Even if there’s a walk away from Singapore, there’s no going back to 2017.  Why?  Because the US has already bested Kim in several ways.

For example, our president has masterfully framed and reframed expectations.  He successfully rebranded his “maximum pressure” as “maximum pressure for now”, implying that the talks will have consequences, good or bad – it’s up to Kim.

And all the while Trump has been artfully adding sweeteners – enlarging the pot – at no cost to the US.

In this way, Trump has been messaging his capacity for commuting Kim’s geo-political solitary confinement.  Perhaps it’s no coincidence that his presidential pardons this past week hint at what’s possible here – if Kim comes clean.

North Korea’s co-conspirators Iran, Syria, and the like must be watching and second-guessing Kim’s reliability, worried that any amnesty granted him would expose lots of dirty business coming out of those places and threaten their many schemes.  Again, Advantage: US.

At Singapore, other spectators in the stands will squelch any sneezes or coughs lest they be misinterpreted as unwelcome interference.  Notably, there will be a “wait and see” hush from the China and Russia seats.  This circumstance has secured their good behavior for now, and tellingly reveals them as spectators – not players – of this mega-match.

Further, the world will keep score depending more on the US referees than the North Korean, providing another subtle US advantage for the post-game analysis.

Geo-strategically, this Singapore sling might be fine without all the alcohol.  It merely needs enough to prove the United States as a reliable guarantor of allies’ security in a relentless world.  By merely walking into that lion’s den Trump does so.  If he can get more while there, he will.

This brings us back to considering other US takeaways already earned.

So, most of us are setting our VCRs for June 12 to get a view of the red carpet.  For months the stars have been offstage, colliding and aligning.  Now come the teases of trophy talk and a securely-delivered oversized envelop.  Soon the curtain will rise and out will come those unpredictable small white pieces of paper with things not scripted on the teleprompter.

But who decides if and when to cue the walk-off music?  Just make sure it’s “Getting to Know You”. 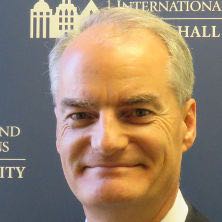 *Hugh Dugan is Visiting Scholar at Seton Hall University’s School of Diplomacy and was a US diplomat and senior diplomatic adviser to eleven ambassadors to the United Nations from 1989 to 2015.