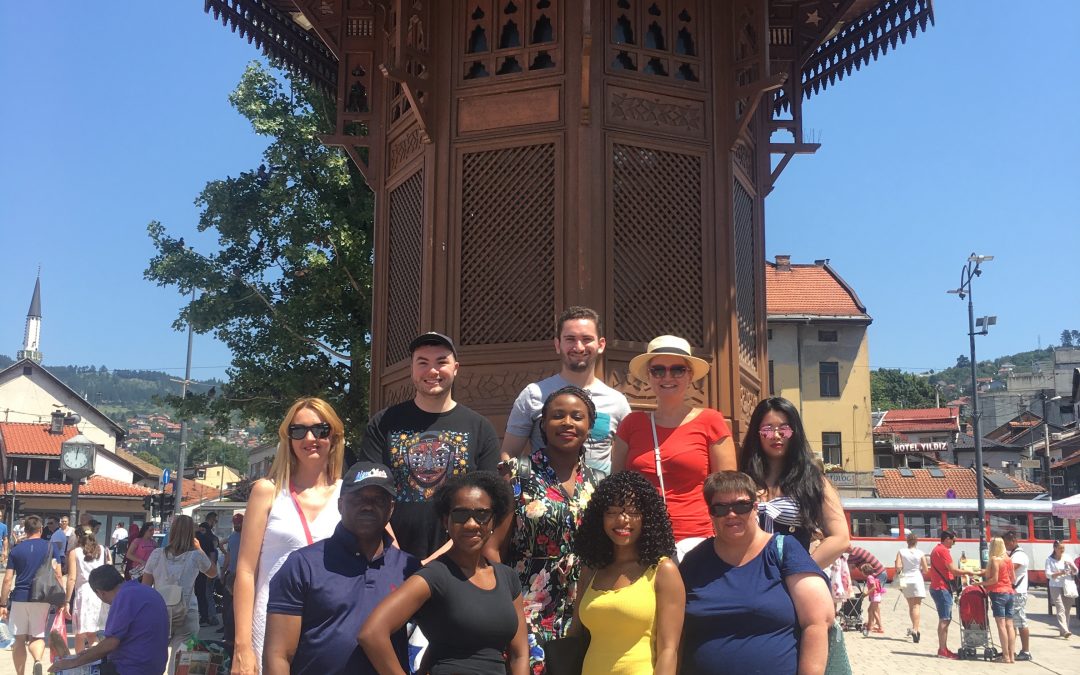 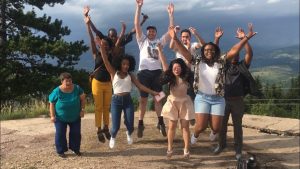 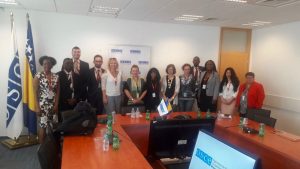 Sarajevo is a beautiful place. Beneath the rolling green hills, peppered with the red roof houses, stands the eclectic architecture of the storied and multi-cultured city. The old town sits quietly in the valley with its coppersmiths’ shops, cafes and ice cream stands, welcoming tourists with a quintessential languid, European charm. I visited Bosnia and Herzegovina in July, 2018 as part of a School of Diplomacy study seminar program led by Dr. Borislava Manojlovic to learn about peace and reconciliation in a post conflict nation.
During my short time there, I witnessed the beauty the country had to offer as well as the legacy of war that it carries on its shoulder. The people there are kind, gracious and generous in their hospitality. Yet, underneath the mask of tranquility, lies division. The war that tore the country apart in the 90’s left behind a bitterness and animosity that continues to hang over the three ethnic groups that make up the country’s population — they aren’t one Bosnian people, they are three distinct groups, the Bosniaks, the Serbs and the Croats. Time does not seem to have brought much healing.
Before our delegation departed the U.S., I was asked, “What interests you about Bosnia and Herzegovina? What do you hope to gain from your trip?” At the time, I couldn’t articulate well that what I wanted to see were the people who had lived through the realities of the war, the people for whom the terrors were neither fairytales nor simply the history of some distant land. In my sheltered and privileged life, I couldn’t understand war as more than an abstract concept. I wanted to learn about the Bosnian people’s experience and resilience. As I walked the streets alongside the locals who welcomed me into their shops and restaurants, I suddenly realized that the fields of international relations and conflict resolution are about people. As scholars, we cannot disassociate ourselves from the fields’ humanistic function of creating a safer world for people by understanding and preventing conflict.
As I reflect on my experience, there are three lessons that I know I will take with me, sometimes human nature collides with peace, hope and despair intertwine and peace belongs to those who fight for it.

Sometimes Human Nature Collides with Peace
Velma carried herself with the confident demeanor of a boss lady and her answers to our questions easily carried on into blusterous rants. She had a fierce passion, and from the moment I met her, I knew I liked her. My kind of girl, I thought. She knew what she stood for and she knew what she wanted to do, and she had a cause she was determined to fight for against all odds. The odds, it would seem, are stacked against her, and her fight proves to be a difficult one.
Velma is the founder and President of the Post-Conflict Research Center, an NGO that works to document stories of people during the war, stories such as those about heroic actions taken by ordinary people, stories about small actions that made a big difference.
“I also think storytelling is a powerful and intimate tool to help all sides see a conflict from the perspective of their enemies,” I said to her. In my naivety, there was a small part of me that thought, perhaps, the key to peace and reconciliation was right in front of me.
“It can be,” she replied, “Unfortunately, it’s not so easy to get people to listen to the stories of their enemies.” Velma explained, “We once tried to do a project that linked the stories of all three sides, side by side, and people were outraged. ‘You can’t tell the story of the Muslims, next to the story of the Serbs!’ they said.”
I thought to myself, Strange isn’t it? The opportunity to heal is right in front of them, and still there are people who would speak out against it. What could be more important than peace? What values are there in the world, so worth protecting, that would make a person choose to continue to hate their neighbor, over the opportunity to reconcile? It’s a stark contrast to see that in this world there are people like Velma who would fight for peace, and stand against division, and then there are people who would stand against peace, no matter the cost and no matter the reason. That’s what makes peace so complex, humans and all the multitudes of values, ideals, judgments and reasoning, both logical and illogical that come with being human.

Hope and Despair Intertwine
The Tunnel of Hope was a dangerous underground trek constructed during the Siege of Sarajevo in June of 1993. In the midst of war the tunnel was built by the Bosniak Army to create a passage through the Sarajevo Airport that would allow food, humanitarian aid, war supplies and weapons to be transferred into the city.
Today, this same tunnel, now called the Memorial Complex Tunnel D-B, is a museum, partially a tourist attraction, partially an educational resource. Our tour guide was a young woman who couldn’t have been much older than I am, but she had lived through the war, and through her stories and explanations an unfamiliar landscape came to life before my eyes. I could almost feel what it was like to spend a childhood in the backdrop of war.
“We didn’t have real eggs to eat during the war,” she said, “and my brother, who’s younger than me, he had never seen a banana until after the war ended. The first time he tried a banana he ate it with the skin still on.”
It seemed like a small detail beside the stories of violence that I had heard during in my time in the country, and yet the imagery of that seemingly trifling anecdote stuck in my mind, because to me, it was a picture of real life in a time of war.

Peace Belongs to Those Who Fight For It
The Genesis Project, an NGO working towards peace and unity in Bosnia and Herzegovina, shared the story of a school in a small town called Jajce. The regional government had made a decision to further divide the community along the ethnic lines that plagued it. The Bosniak and Croat students were separated into two different school buildings. But the children rose up and fought against the segregation. After a year of protest, their efforts were met with victory.
It was in that story that I learned that peace belongs to those who fight for it, and that the hope for peace can be found in unlikely places, in small towns and school children, and even in ourselves. Perhaps the responsibility of finding hope for peace, in places where it seems impossible, belongs to us all.