The Institute of Museum Ethics (IME) promotes accountability, responsibility, and sustainability in museums by convening conversations about ethical dilemmas now facing museums. This year, the Institute wants involve more students in discussing current issues as well as how museums can live up to professional ethical standards. Beginning in the fall of 2016, IME will hold bi-monthly meetings for students to discuss current ethical issues in museums around the world. On October 4, 2016, IME will hold an informational meeting in the Art Center Lounge from 5:00 until 6:00pm. IME is looking for students who are interested in discussing, researching, or writing about current ethical issues. Please contact museumethics@shu.edu for more information and join us on Tuesday, October 4, 2016.

Interested in the MA Program in Museum Professions at Seton Hall?  Join us at the Graduate Open House on March 22 from 1-3pm. You’ll be able to ask questions and take a guided tour of the campus. Register here: http://www7.shu.edu/graduate-open-house.cfm

Why are people so upset about the idea of the Detroit Institute of Art being forced to sell off prominent works from its collection to remedy the financial problems of the city that owns the museum?  Perhaps it is because the DIA has one of the best collections in the country and has served its public for over a hundred years.  The City of Detroit has recently been approved by a federal judge to declare bankruptcy.  The city owes about $18 billion dollars in municipal debt and several creditors have suggested using revenues of the sale of part of the Museum’s collection to start paying it off.  Christie’s Auction House did an appraisal of approximately 500 works of art, which they estimated to be worth a little less than $2 billion.

Deaccessioning and selling works of art is not unheard of in the museum community, but generally decisions to do so are not made easily and the funds raised go directly to other collection needs.  Rome was not built in a day, and likewise the museum has been collecting those works of art for decades.  A debt of eighteen billion dollars does not accrue overnight either and therefore a speedy solution should likewise not be expected.  In 2012, three counties surrounding Detroit voted to increase their property taxes to raise necessary funds to save the Detroit Institute of Art and give it a more secure financial standing.  The people of Detroit and its neighbors have spoken and they want to save the Museum.  It is hard to suggest preserving priceless works of art is more important than the immediate financial needs of Detroit.

Arguing why the city should or should not use the Detroit Institute of Art to leverage some of the city’s debts is like arguing apples and oranges.  Reasons against selling the works of art come from a moral standpoint and reasons in favor of selling the art come from a financial and legal stance.  Ethically, many people will agree the museum should not be forced to sell major works of art to lessen city debt.  The public has openly supported the Detroit Institute of Art by willingly raising property taxes specifically to fund the Museum.  Future generations will be affected by the decisions being made today.  Once the art is gone it is very unlikely that the museum will ever be able to purchase any of it back, assuming Detroit eventually has a financial turnaround.   Selling the works of art at an auction does not guarantee it will go to other museums; some of the art could go to private collectors and not be put on display again.  The entire premise of a museum is to hold the collection in trust for the public, that trust is broken when the museum cannot safely keep the art in its collection.  Technically, the emergency manager is well within his rights to use the DIA to help lessen Detroit’s debt.  The City of Detroit owns the Detroit Institute of Art and the portions of its collection were purchased with city money.  The emergency manager of Detroit also legally has the authority to fire the non-profit organization running the Museum and take it back directly under city control.

Currently, several groups are brainstorming other solutions for Detroit that would raise money and protect the integrity of the Museum.  The next few weeks will be very interesting as supporters of the Detroit Institute of Art scramble to raise funds to save the collection.  If the City of Detroit decides to move forward with a plan to sell art, the DIA has vowed to take all necessary legal action to prevent it from happening.  If the city is successful in selling art they may be opening Pandora’s Box and creating future ethical questions.  Only time will tell how this will all work out.  Follow the story on the Institute of Museum Ethics Facebook page for updates.

Maureen Harrison is the Newsletter Correspondent on the Institute of Museum Ethics Student Advisory Committee. Maureen is second-year graduate student in the MA Program in Museum Professions at Seton Hall University.

“Don’t go to a museum with a destination. Museums are wormholes to other worlds. They are ecstasy machines. Follow your eyes to wherever they lead you, stop, get very quiet, and the world should begin to change for you.” –Jerry Saltz, art critic

This past summer, SHU students in the Museum Professions program traveled to Beijing and Shanghai, China for the annual seminar abroad. In a course titled “The Future of Museums,” our students got behind-the-scenes insight into the museum profession in China. Check out this group of students in front of the Forbidden City! 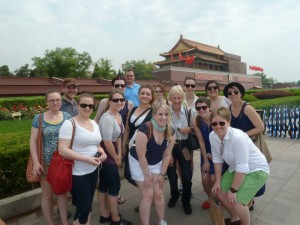 Did you know that Seton Hall is home to the Institute of Museum Ethics?

Founded in 2007, the Institute of Museum Ethics promotes accountability, responsibility, and sustainability in museums. The Institute convenes conversations about critical ethical issues facing museums today, and creates a physical and virtual community of emerging and practicing museum professionals who can use their resources to make informed decisions about ethical matters.

Join in the conversations in the Institute’s official Linkedin group!