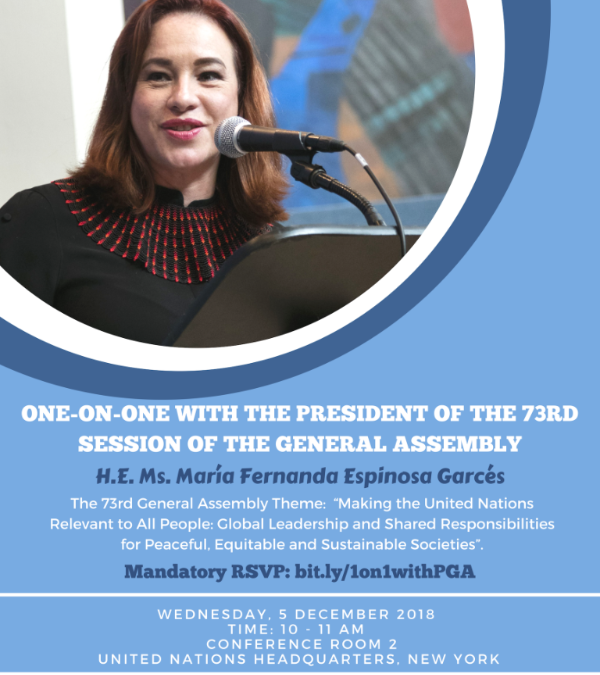 I’ll be honest, I’m uncertain how much optimism can truly serve in realizing the daunting ideal of creating a better world. But in the world of politics and international relations, when the landscape is seemingly always bleak, I suppose that most appreciate a little bit of optimism, especially when that optimism comes from those who lead. In the scope of optimistic leaders, H.E. Maria Fernanda Espinosa Graces, fits the bill. Ms. Espinosa Graces has served Ecuador as Minister of Foreign Affairs, not once, but twice, as well as serving as the Minister of National Defense and the Coordinating Minister of Natural and Cultural Heritage, and she now serves the United Nations as the President of the 73rd Session of the UN General Assembly. On Wednesday, December 5, 2018 she held a one-on-one session at the United Nations Headquarters. I sat in the back of the fully packed conference room and listened as Ms. Espinosa Graces explained her hopes and ambitions for the future of the United Nations. Even from my seat in the back of the large room, her optimism was clear. 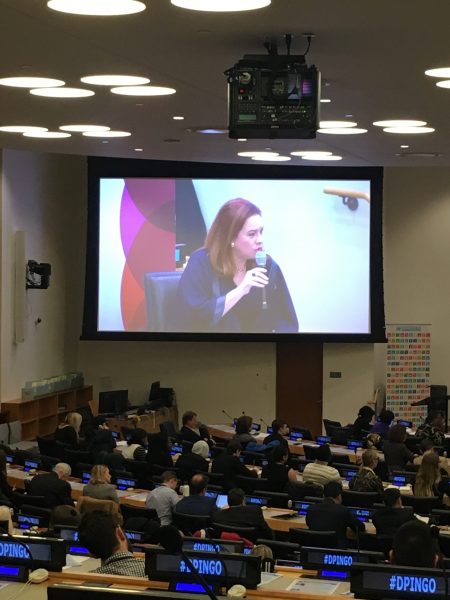 The theme of the morning was “Making the United Nations Relevant to All People: Global Leadership and Shared Responsibilities for Peaceful, Equitable, and Sustainable Societies.” During her talk, Ms. Espinosa Graces elaborated on this theme. The United Nations, she stated, has a duty to uphold the principles of the UN charter, while people in power have a duty to the people who voted for them, and every citizen of every country across the globe has a duty to be the moral consciences of their countries.

In only an hour, Ms. Espinosa Graces painted a picture of the future she wants for the United Nations. Her goals for the future included a full revitalization of an organization that had been built for the people of the world, but has since become increasingly bureacratic. In order to make the United Nations fit for the principles upon which it was established, Ms. Espinosa Graces stated that multilateralism is in order. The cooperation of member states and delegates is essential, but most importantly all must consider not their own personal agendas, but the human beings behind the work of the United Nations. “Who will suffer?” she asked, “Who will be affected, if the global community cannot come together?” Towards the end of the session, as the Q and A segment of the morning was underway, my colleague and friend leaned over and whispered in my ear, “She’s a smart politician.” That she is. She navigated hard-hitting questions with grace and poise without sacrificing eloquence and through it all she never forgot her primary message: that the United Nations exists to serve the people of the world and that the future she wants is to see the United Nations become a pillar for all the principles upon which it was built.

This article was written by Senhwa Evaline Horng, a second-year graduate student at Seton Hall’s School of Diplomacy and International Relations.