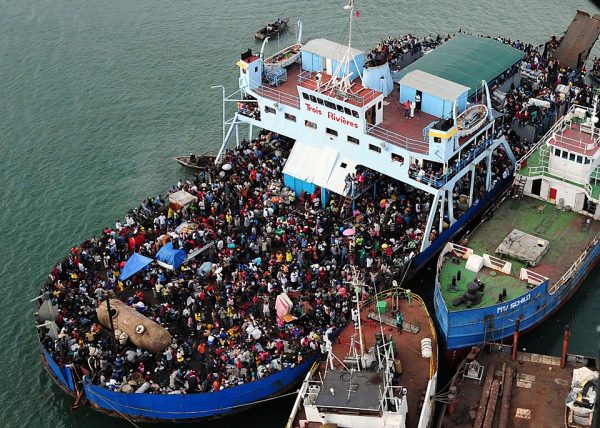 Through rivers, streams, hills, mountains and deserts, the refugee route is not unfamiliar to men, woman and children. After a distance of thousands of miles and crossing eleven countries, they seek their right to self-determination. Millions are migrating for several reasons including warfare, political fear and economic stability. Out of the many cases, Haiti is another case of economic refugees departing their homeland in search of a better life in another land. By addressing the need for a 21st-century approach to prevent economic refugees as a result of globalization, evaluating a new method of redefining refugees, and implementing a corrupt resistant aid on-site, the international community has the ability to ensure humanity’s right to self-determination and sustainability.

The refugee’s crisis is a symptom birthed from systemic inefficient environments which threaten the sustainability of humanity and without precautionary actions, it will continue to do so for decades to come. Haiti, known as a country with hindered economic barriers, has been stripped of influx thousands who are fleeing for greater opportunities.

Known as the first black colonized country to gain its independence in 1804, Haiti has faced a number of oppositions in its economic and political development. From relations with its neighbor Dominican Republic to relations with the superpower the United States (US). These dynamics have impacted the growth and sustainability of Haiti’s government.

The US is perhaps seen as having a crippling effect when observing US and Haiti relations. The Carter administration was the light in the dimming chapter of Haiti’s economic history as an influx of Haitian citizens were given access into the United States due to an admittance under the condition in which further actions were to be completed by the legislation. However, after the Carter administration, immigration policies towards Haiti refugees became strictly regulated.

The Clinton administration acquired similar policies as the preceding presidents, but soon had difficult with on-chip processing and creating safe zones. This policy soon resulted in assisting the restoration with the Haitian government. The US occupation of Haiti in 1994, yielded a halt the influx of Haitian refugees but consequently inflicted further harm to Haiti’s vital private industries including agriculture and livestock.

The Obama administration suspended the deportation of Haitian refugees seeking asylum after the earthquake of 2010, but soon returned to the strict regulations of deportations and focused on concerning threats to the US national security.

As a result of economic limitations and for few political persecutions, a mass migration of Haitian citizens is crossing into countries in Latin America. Some citizens are going as far as Brazil and also to the neighboring country, the Dominican Republic. Haiti and the Dominican Republic share the island, which is the second largest in the Caribbean after Cuba. However, Hispaniola’s people do not mingle due to political tensions, a history of wars, massacres, and other atrocities.

Now many are faced with discrimination and persecution as a result of xenophobia. In fact, there are particular cases in which individuals born in the Dominican Republic, but of Haitian descendants, are still targeted and sent back to the Haitian and Domination border.

A few years ago, after a call of registration and pardon by President Danilo Medina, many Haitian individuals who thought there were to receive a status are now targeted and deported.  Subsequently, many Haitians are migrating elsewhere such as Brazil, but are too faced to crippling conditions as a result of discriminatory actions and subjected to economic instability.

Which leads to the current influx of Haitian refugees traveling by foot to reach the US and Mexican border. Unfortunately, they too are met with a number of challenges at the border, which results in a massive influx of nationalities seeking to enter the United States. If not, they are seeking limited resources in humanitarian aid location provided by local churches. In this current state, citizens such as those of Haiti, are seen unwanted from the US and the Mexican government.

A new president and legislature finally took office in 2017. Jovenel Moise was declared president, ending a protracted electoral process that has paralyzed the Caribbean country’s politics for more than a year. President Moise got elected by promising food security, paved roads, electricity across the country, and a crackdown on corruption. On October 23, 2018, Moise removed two top government officials in a purge of people linked to a corruption scandal.

For the Haitians refugees, it is clear they have faced many challenges as well as Haiti itself. The best solution for Haiti and Haitians is to properly address the effects and influence of trade and economy, to avoid more migration flows. The country needs some economic stability to cater to its population in land and overseas, those who may come back by July 2019. Lastly, implement a corrupt resistant aid, on-site, maybe be perceived as a start to a ravaging fire. Haiti may be inflamed, but its heart and deeply-rooted history display it will never give up without a fight.

Ruthly Cadestin, an alumna of Seton Hall School of Diplomacy and International Relations, was responsible for collecting data and research for this blog. The time frame was between March and April 2017, resulting in a policy memo written by Cadestin in April of 2017. This blog post was updated and written by Patricia Zanini Graca, a second-year graduate student at Seton Hall’s School of Diplomacy and International Relations. Patricia is the Executive Editor at the Journal of Diplomacy, a UN Digital Representative at the Center for UN and Global Governance Studies, an Abd El-Kader Student Fellow and the Director of International Affairs at the Graduate Diplomacy Council. She specializes in International Organizations and Global Negotiations & Conflict Management. Her interests are human rights, gender equality and corporate social responsibility.