Lessons to be learned of the 21st Century Refugee Crisis 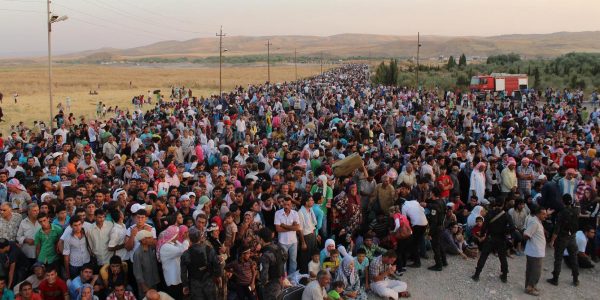 The first theme is Freedom. The Universal Declaration of Human Rights’ preamble alludes to Franklin Delano Roosevelt’s Four Freedom Speech, which declared a world in which human beings shall enjoy the freedom of speech and expression, freedom of worship, freedom from want, and freedom from fear as the highest aspiration of the common people. All of our recommendations were made with this highest aspiration in mind because the problems of refugees and internally displaced peoples result from the lack of people’s freedoms being protected.

Freedom from fear is closely tied with the plight of refugees. This is recognized not only in the definitions and criteria used to determine their status but also in their efforts to escape persecution, which is often met with resistance and sometimes even death.  Freedom from want connects to the plight of internally displaced people. It is often the lack of opportunity to fulfill necessitated wants that force people to become internally displaced. This is reflected in our solutions which seek to increase assistance and aid or provide education and training in such areas.

Finally, freedom of speech and expression is addressed, as we critically examine the power of the media. We must not forget freedom of speech was one of the catalysts which sparked the Syrian Civil War in the first place, and that people’s negative beliefs on refugees only further worsened this global crisis. The freedoms of speech and belief can only be exercised and protected when the media is actively used as an instrument of expression and truth, not as an instrument of suppression and falsity. The protection of these freedoms is a moral obligation, not just because they are addressed in the Universal Declaration of Human Rights, but because fear, want, and a desire to express oneself are feelings that are common to all of humankind.

Inaction is intolerable in these situations. Humanity has witnessed too many instances of drowned refugees from capsized ships, starving children from famine, and countless lives lost and cities destroyed from armed conflict. We can no longer accept policies that treat inaction as viable because these impacts are felt across the globe. But we also live in a very special point in human history. The internet has allowed us to have virtually all of the human knowledge accessible at our fingertips. As evidenced by our policy recommendation project, there are many approaches and solutions for tackling the refugee crisis that may not have been explored yet.  We must realize that we can generate solutions and that the tools for solutions are completely within our reach. We must also be aware that while we can make these solutions they will not be perfect. However, I am comforted by Theodore Roosevelt’s Man in the Arena speech. Theodore Roosevelt acknowledged that there are many critics, but gave the credit to those who act. A supporting quote by our 26th  President and Nobel Peace Prize winner acknowledges that “the only man who makes no mistakes is the man who never does anything.” Doing nothing is not an option when the costs are human lives. With such an existing moral imperative we must become the Man in the Arena, so that we can taste the fruits of victory, even in the face of defeat. The refugees that make these sacrifices for the sake of their survival are truly in the Arena, but as a martial artist, I also know that no one goes into the arena without a corner as well. We policymakers enter the arena as both the fighter, and the cornerman, as a fighter, and supporter, as both roles are a part of the nature of victory. If we truly want to live in a prosperous world, we must aim high so that we can achieve great things. Achievement is the true meaning of victory, and we have the capability to execute and accomplish such in the 21st century.

Michael Hamilton, a graduate student of Seton Hall School of Diplomacy and International Relations, was responsible for collecting data and research for this blog. The time frame was between March and April 2017, resulting in a policy memo written by Hamilton in April of 2017. This blog was updated by Maliheh Bitaraf, who is a second-year graduate student at Seton Hall’s School of Diplomacy and International Relations. Maliheh got her first master’s degree in Mass Communication at Middle Tennessee State University (MTSU). Maliheh is an Editor and Social Media Associate at the Journal of Diplomacy and a UN Digital Representative at the Center for UN and Global Governance Studies. Maliheh specializes in International Organizations and Foreign Policy Analysis.