Haley: No to UN Global Pact for the Environment 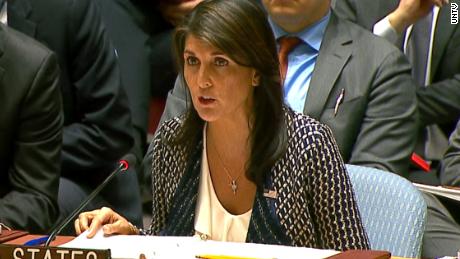 Catherine Tinker, J.D., J.S.D. was mentioned in the publication by Fox News on 9 May 2018. Dr. Tinker is a visiting associate professor at the School of Diplomacy and International Relations at Seton Hall University.

Originally published by Fox News on 9 May 2018

A proposal for bringing international environmental law under one legally binding treaty at the United Nations will be up for a preliminary vote later this week at the U.N. General Assembly. The United States U.N. Ambassador Nikki Haley tells Fox News in a statement that the U.S. won’t support the measure.

The Global Pact for the environment has the backing of French President Emmanuel Macron and the United Nations Secretary General António Guterres, and is being sponsored by France at the world body. It seeks to consolidate what it calls the “fragmented nature of environmental law,” and “codify” it, and make it accessible to all citizens.

In a statement to Fox News, Haley said that, “When international bodies attempt to force America into vague environmental commitments, it’s a sure sign that American citizens and businesses will get stuck paying a large bill without getting large benefits. The proposed global compact is not in our interests, and we oppose it,”

First launched in Paris just weeks after President Trump took the U.S. out of the Paris agreement on climate change, the pact was drawn up by a group of 80 legal experts from 40 countries. At the opening event Macron was joined by the former Republican Governor of California Arnold Schwarzenegger, who offered his support to it, telling Agence France-Presse that the issue was not a political one.

In September, Macron set out the goals of Global Pact at the United Nations. He said the framework would “establish rights, but also duties for mankind.”

Macron urged quick adoption in his speech, “I very strongly believe that the world is ready for this and that it’s our responsibility.” Guterres also gave his support to the pact at the meeting.

Marc Morano, publisher of Climate Depot, and author of the new book, “The Politically Incorrect Guide to Climate Change,” charged that, “This new global environmental pact will have more teeth and cover more aspects of human civilization than the U.N.-Paris climate pact. This new environmental pact is looking to be the U.N. Paris agreement on steroids because they are making it binding, and it appears even wider in scope.”

One United Nations diplomat told Fox News that, “the unknowing and uncertainty is what makes us so nervous, because you just never know where this can go and it could open up a Pandora’s Box.”

Catherine Tinker, visiting associate professor at Seton Hall University’s School of Diplomacy and International Relations, and an expert in international environmental law, pointed to the hundreds of multilateral agreements that are already in place.

Tinker told Fox News, “While the global pact for the environment is well-intentioned, and may well serve as a guideline for some states, I am unconvinced of the need for a general treaty of this sort. There are in the neighborhood of 1,500 multilateral environmental agreements negotiated and ratified by various states in the last 40 years — these are binding. There are numerous voluntary commitments such as the Paris Agreement and the U.N.’s 2030 Agenda for Sustainable Development. We don’t need new laws, what we need is implementation.”

A vote on the French draft resolution is likely to take place this coming Thursday.